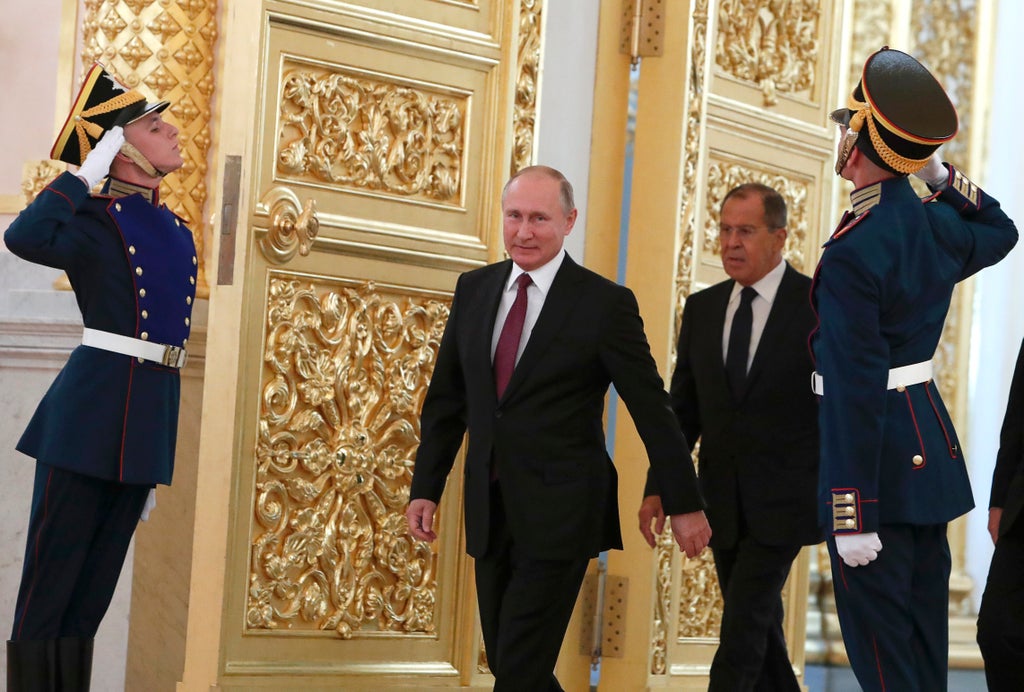 The term Russian oligarch conjures images of posh London mansions, gold-plated Bentleys and sleek superyachts in the Mediterranean, their decks draped with partiers dripping in jewels.

But the raft of sanctions on oligarchs announced by President Joe Biden this week in response to the invasion of Ukraine may do little to dim the jet-setting lifestyles of Russia’s ultra-rich and infamous – much less force a withdrawal of tanks and troops.

US sanctions target Russian President Vladmir Putin and a handful of individuals believed to advise to be among his closest securityrs, including Foreign Minister Sergey Lavrov. But the list is just as notable for who isn’t on it — the top names from Forbes’ list of the richest Russians whose multi-billion-dollar fortunes are now largely intertwined with the West, from investments in Silicon Valley start-ups to British Premier League soccer teams.

Citing the concerns of European allies, the US also didn’t impose what was seen as the harshest punishment at its disposal, banning Russia from SWIFT, the international financial system that banks use to move money around the world.

Biden said Thursday the new US sanctions would nonetheless cripple Russia’s financial system and stymie its economic growth by targeting Russia’s biggest banks, which the Treasury Department said holds nearly 80% of all the country’s banking assets.

“Putin is the aggressor. Putin chose this war. And now he and his country will bear the consequences, ”Biden said, laying out measures that will“ impose severe cost on the Russian economy, both immediately and over time. ”

But much of the wealth of Russia’s richest isn’t held in the sanctioned Russian banks. Putin and the oligarchs aligned with him have had decades to stash assets overseas, much of it hidden in ways specifically designed to avoid sanctions.

Putin himself is believed to personally control many billions in cash and overseas assets, but to avoid the appearance of corruption his money is held under the names of trusted friends and relatives, many of whom are from his home city of St. Petersburg.

A 2017 study of Russian oligarchs published by the US-based National Economic Bureau estimated that as much as $800 billion is held by wealthy Russians in the United Kingdom, Switzerland, Cyprus, and similar offshore banking centers. That vast fortune, held by a few hundred ultra-rich individuals, is roughly equal to the wealth of the entire rest of the Russian population of 144 million people.

Some oligarchs have also obtained dual citizenship in Britain and other Western countries, adding legal complications to attempts to unilaterally seize their assets.

An example is Roman Abramovich, a former Russian provincial governor and Putin ally who became a steel and metals magnate. Now a dual Israeli citizen with a net worth estimated at more than $13 billion, Abramovich has used his fortune to buy the British soccer club Chelsea and homes in London and New York. He and his now ex-wife frequently socialized with Ivanka Trump and Jared Kushner, the daughter and son-in-law of former President Donald Trump.

Abramovich also owns what is purported to be the world’s most expensive superyacht, the 455-foot-long Solaris, which features a helicopter hanger, tennis court, pool and rooms for more than three dozen guests.

Also not on the sanctions list is Alisher Usmanov, another Russian metals tycoon who was an early investor in Facebook. His fortune of him is estimated at more than $14 billion.

Usmanov recently sold his stake in the British soccer club Arsenal for a reported $700 million and, according to Forbes, owns two sprawling estates in London – the Beechwood House and Sutton Place –worth a combined $300 million. Usmanov’s superyacht, Dilbar, measures 512 feet bow to stern, slightly longer than Abramovich’s.

Daniel Fried, a former US official under both Democratic and Republican administrations who helped craft US sanctions against Moscow in the wake of Putin’s 2014 invasion of Crimean Peninsula, said he was surprised Abramovich and Usmanov weren’t on the sanctions list announced Thursday, given their long ties to Putin and visible assets in the West.

But, Fried warned, sanctioning Russian oligarchs would likely have limited impact on persuading Putin to change course in Ukraine.

“He owns them absolutely. He crushed them and they exist only by his sufferance from him, ”said Fried. “He can jail them, or kill them, and the notion that the oligarchs can assert influence over Putin is foolish.”

Still, he said the opinion of wealthy, educated elites carries some intangible weight that Putin defies at his own risk. While sanctions are unlikely to drive the oligarchs away from Putin, they do raise for them the cost of their continued support.

See also  Ukrainians fleeing war find welcome in a Calais hostel, but not in Britain

“They can’t stop or vote him out of office. But he’s only in total control until he isn’t,” said Fried, who is now a fellow at the Washington-based Atlantic Council.

The family fortunes of many in Russia’s billionaires date back to the 1990s, the turbulent decade after the fall of the Soviet Union. Under the notoriously corrupt presidency of Boris Yeltsin, such key state-controlled assets as oil refineries, steel mills, aluminum smelters and tractor factories were gobbled up by the politically influential, often purchased with the aid of government-backed loans.

Then in 1999 Yeltsin unexpectedly resigned and the then-relatively unknown Putin was appointed as acting president. A former KGB agent, Putin had earlier been appointed by Yeltsin as the head of Russia’s FSB, among the country’s most powerful spying and security agencies.

Putin has ruled Russia for the last 22 years, crushing those who have dared challenge him.

Mikhail Khodorkovsky, an oil baron once believed to be the wealthiest man in Russia, ran afoul of Putin when he more fully embraced the free market and began criticizing the vestiges of Soviet central planning. Khodorkovsky was arrested by Russian authorities in 2003 and charged with fraud, money laundering and embezzlement. After spending a decade in jail, he was released in 2013 and fled to London, where he now leads a foundation, the Dossier Center, dedicated to exposing criminal activity by Kremlin insiders.

One of his most trusted deputies at Yukos Oil Company, Leonid Nevzlin, was forced to flee to Israel. But even exile didn’t protect the billionaire from being convicted in absentia on widely discredited charges of murder.

Boris Berezovsky, a mathematician turned Mercedes dealer who amassed a fortune by acquiring the country’s main television channel at the end of the Soviet era, was tried in absentia on charged of fraud and embezzlement after fleeing to London in 2000.

He was found dead on the bathroom floor of his home in southern England in 2013. His daughter said he feared he had been poisoned after losing a major court battle against Abramovich, his former business partner. Originally believed to be a suicide, a coroner recorded the cause of death as inconclusive due to conflicting forensic evidence.

“Every oligarch owes the preservation of their wealth to the Kremlin,” said Max Bergmann, a senior fellow at American Progress who also served at the State Department during the Obama administration. “The oligarch class is an important pillar of the Putin regime and is heavily exposed because their assets are held in the West – in villas in the South of France, condos in Trump properties, and in sports teams.”

See also  When are the train strikes and which rail lines are affected? | News

Maria Shagina, a sanctions expert at the Helsinki-based Finnish Institute of International Affairs, said European countries are seeking to insulate their own economic interests from the effects of sanctions, whether that’s natural gas piped to Germany, diamonds imported from Siberian mines or Italian luxury cars and designer handbags exported to be sold in Moscow or St. Petersburg.

“We see that Europeans don’t want to bear any sanctions cost,” Shagina said. “It is painful for everyone.”

But, the experts said, the sanctions announced this week will cause pain and eventually force the Kremlin to make hard budgetary choices by weakening the Russian economy.

Most Russians are significantly poorer than their Western counterparts. The Russian Federation ranks 83rd in per capita gross domestic product, at a little under $11,000 per person, according to 2020 data compiled by The World Bank. That’s less than a third of the average for the European Union and about one-sixth of per-capita GDP for the United States.

“Putin will have to choose between putting money into his military or paying pensioners,” Bergmann said. “So sanctions serve to degrade Putin’s power and strength over the long term.”

Edward Fishman, a former State Department official during the Obama administration, said the move to sanction Putin sends a strong signal of support to the Ukrainians who are under fire. But the economic penalties have no real effect on the Russian leader.