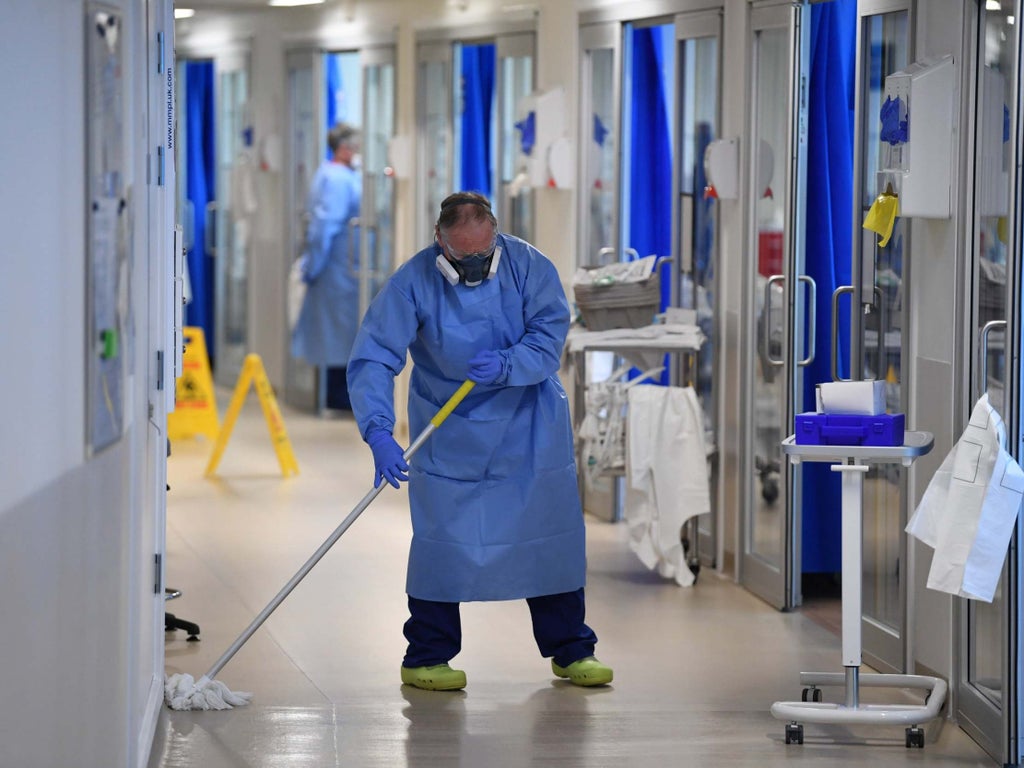 Cleaners at a London hospital have launched a campaign against an outsourcing company and a giant private US healthcare firm, claiming that they were subjected to bullying and harassment when they spoke out about a string of alleged serious Covid safety violations.

Health Corporation of America (HCA) claimed millions of pounds in furlough money while collecting £190m in NHS contracts. Its revenues hit $51bn in 2020 but it paid key workers in its London hospital just £9.36 per hour – substantially below the London Living Wage of £11.05.

The cleaners, who are campaigning for better pay and conditions, allege that their safety has been put at risk through much of the pandemic by managers at their employer Compass Group.

HCA has outsourced some of its cleaning contracts to Compass, which cleaners say failed to give them proper training or tell them which rooms had Covid patients in them.

It is not the first time Compass has been at the center of controversy. The firm sparked an outcry last year when pictures emerged of substandard school meal parcels.

Compass bosses were forced to apologize after the meals were branded “just not good enough” by footballer Marcus Rashford.

“I have asthma and my safety is put at risk every single day. We haven’t had proper training or basic safety equipment. We are harassed by managers and we are underpaid and undervalued. The pay is so low I have to fight every day to support my family.”

Ms Blanco said she and colleagues are instructed to clean Covid wards without adequate training, PPE, uniforms, or prior warning about which rooms may be contaminated with the virus.

Compass said that all of its employees have access to training, appropriate PPE, uniforms or scrubs, whilst following the hospital’s strict infection control policies.

“No employee is ever expected to work when unwell. Anyone who does have to self-isolate due to Covid receives contractual sick pay,” a spokesperson added.

The cleaners also allege that Compass has frequently failed to provide translation of training sessions for the mostly Spanish-speaking workforce.

They say they are given no time to wash before going on to clean wards with other patients, while several workers who contracted Covid during the pandemic were forced to isolate without pay. Other staff say they cannot afford to stay at home and are therefore had to work while ill.

While cleaners employed at the hospital directly by HCA are paid their full salary while isolating, those on outsourced contracts receive only basic Statutory Sick Pay of £96.35 per week. However, one worker said that she was not even paid SSP when she had to isolate with Covid for two weeks.

Ramona Marredo Mendez said: “When I asked Compass for support in accessing the statutory sick pay, they did nothing so I ended up at home for two weeks with no money.”

Meanwhile, the cleaners allege that they have suffered severe stress and mental health issues due to overwork, harassment and bullying.

The cleaners at London Bridge Hospital are among hundreds of outsourced and gig economy workers being represented by the Independent Workers’ Union of Great Britain (IWGB).

Henry Chango Lopez, general secretary of the IWGB, said: “It is completely unacceptable that a multi-billion dollar company that took £190m of NHS money during the pandemic is forcing its outsourced cleaners to work in dangerous conditions for poverty pay.

“Cleaners are key workers and they perform indispensable, risky work at London Bridge Hospital yet this majority-migrant workforce are treated like second-class citizens.”

The workers are calling for equality with in-house staff, including a pay rise to £12.50 an hour and full sick pay.

A spokesperson for Compass said it had dealt with employee concerns as soon as they were raised.

“Anyone who does have to self-isolate due to Covid receives contractual sick pay,” they said.

“In January we awarded a pay increase to our employees, this combined with a retention bonus paid in December 2021 equates to a minimum per cent increase. This is in addition to their annual inflationary pay uplift due later this year.

“We established a helping hands fund to provide grants to employees who need additional financial support as the result of the impact of the pandemic.”