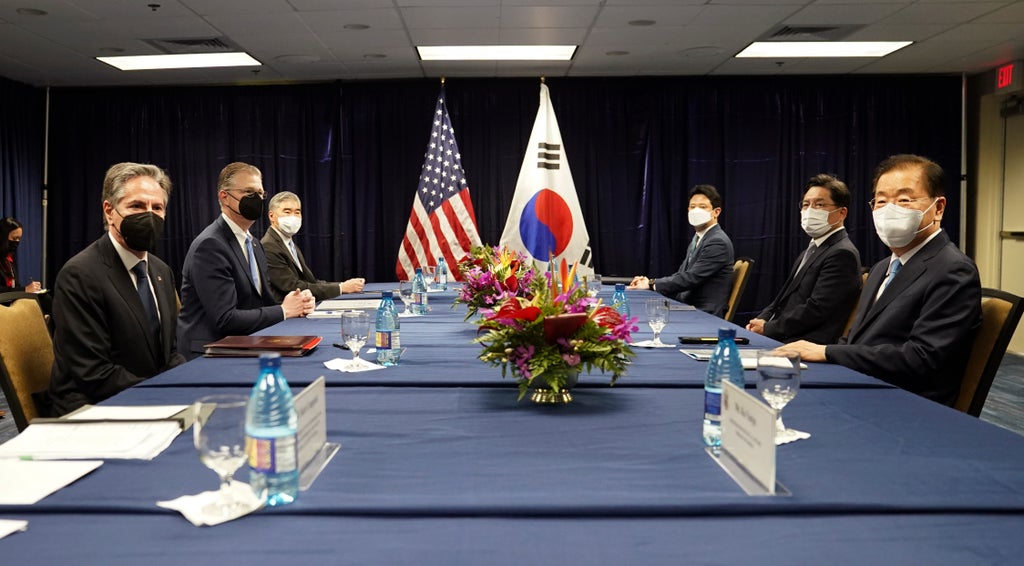 US Secretary of State Antony Blinken met his Japanese and South Korean counterparts Saturday in Hawaii to discuss the threat posed by nuclear-armed North Korea after Pyongyang began the year with a series of missile tests.

Blinken said at a news conference after the meeting that North Korea was “in a phase of provocation” and the three countries condemned the recent missile launches.

“We are absolutely united in our approach, in our determination,” Blinken said after his talks with Japanese Foreign Minister Yoshimasa Hayashi and South Korean Foreign Minister Chung Eui-yong

He said the countries were “very closely consulting” on further steps they may take in response to North Korea, but didn’t offer specifics.

The three released a joint statement calling on North Korea to engage in dialogue and cease its “unlawful activities.” They said they had no hostile intent toward North Korea and were open to meeting Pyongyang without preconditions.

Hayashi later told Japanese reporters the three ministers had “very fruitful” discussion on the North. He declined to give details on additional measures they may take.

North Korea has a long history of using provocations such as missile or nuclear tests to seek international concessions. The latest tests come as the North’s economy, already battered by decades of mismanagement and crippling US-led sanctions, is hit hard by pandemic border closures.

Many see the tests as an attempt to pressure President Joe Biden’s administration into easing the sanctions. The Biden administration has shown no willingness to do so without meaningful cuts to the North’s nuclear program, but it has offered open-ended talks.

North Korea has rebuffed US offers to resume diplomacy, saying it won’t return to talks unless Washington drops what it says are hostile polices. The North bristles at both the sanctions and regular military exercises the US holds with South Korea.

The tests also have a technical component, allowing North Korea to hone its weapons arsenal. One of the missiles recently tested — the Hwasong-12 intermediate-range ballistic missile — is capable of reaching the US territory of Guam. It was the longest-distance weapon the North has tested since 2017.

North Korea appears to be pausing its tests during the Winter Olympics in China, its most important ally and economic lifeline. But analysts believe North Korea will dramatically increase its weapons testing after the Olympics.

The recent tests have rattled Pyongyang’s neighbors in South Korea and Japan. South Korean President Moon Jae-in, who helped set up the historic talks between North Korean leader Kim Jong Un and former President Donald Trump in 2018 and 2019, said last month that the tests were a violation UN Security Council resolutions and urged the North to cease “actions that create tensions and pressure.”

The Security Council initially imposed sanctions on North Korea after its first nuclear test in 2006. It made them tougher in response to further nuclear tests and the country’s increasingly sophisticated nuclear and ballistic missile programs.

China and Russia, citing the North’s economic difficulties, have called for lifting seafood sanctions like those banning exports and prohibitions on its citizens working overseas and sending home their earnings.

Blinken arrived in Hawaii from Fiji, where he met with Acting Prime Minister Aiyaz Sayed-Khaiyum and other Pacific leaders to talk about regional issues, especially the existential risk posed by climate change. It was the first visit by a US secretary of state to Fiji since 1985.

He started his Pacific tour in Australia, where he met his counterparts from Australia, India and Japan. The four nations form the “Quad,” a bloc of Indo-Pacific democracies that was created to counter China’s regional influence.

Hayashi and Chung held a separate bilateral meeting Saturday for about 40 minutes before seeing Blinken. Japan’s Foreign Ministry said they reaffirmed the importance of cooperating together and with the United States to respond to North Korea and to achieve regional stability.

The ministry said they also “frankly” exchanged views on ongoing disputes between the two countries, including wartime Korean laborers and sexual abuse of Korean women forced into sexual servitude by Japan’s imperial army.

Associated Press writers Mari Yamaguchi in Tokyo and Hyung-jin Kim in Seoul contributed to this report.