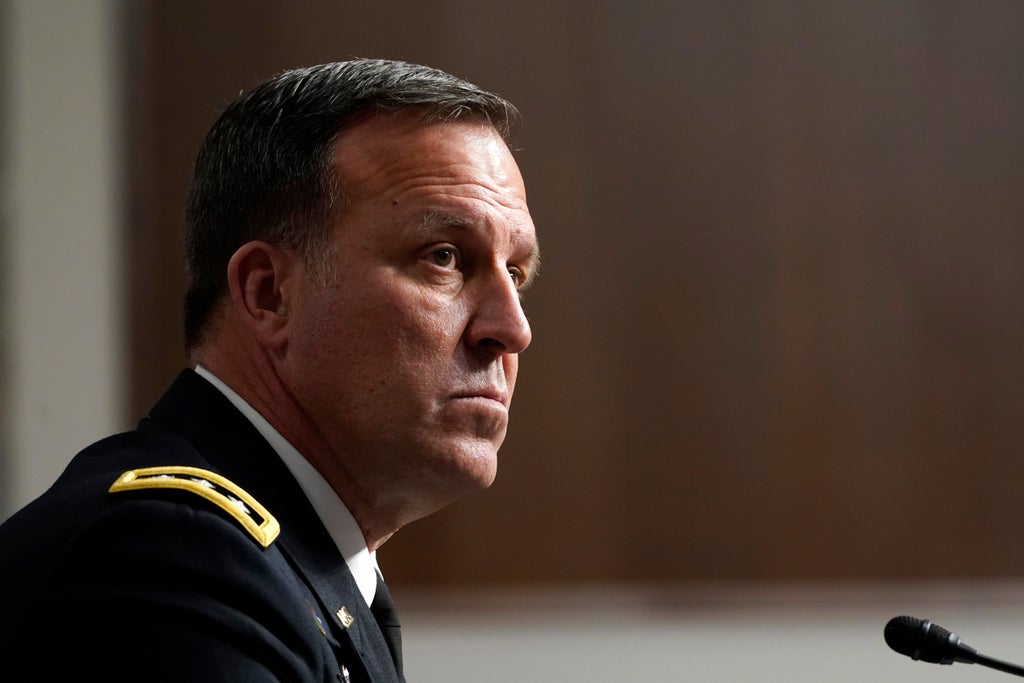 The Army general tapped to take over as top US commander in the Middle East warned senators Tuesday that if Russian invades Ukraine as many fear, it could create broader instability in the Middle East, including Syria But he was clear that Iran remains the key threat to US and allies in the region.

Lt. Gen. Erik Kurilla also told the Senate Armed Services Committee that China is expanding its power and spending in the Central Command region, including in countries needed by the US to gather intelligence on extremist activities in Afghanistan.

“The United States faces a new era of strategic competition with China and Russia that is not confined to one geographical region and extends into the (Central Command) area of ​​responsibility,” said Kurilla during the committee’s hearing on his nomination. “As the United States rightfully prioritizes competition with China, we must remain engaged in the Middle East and Central and South Asia.”

Kurilla, a combat-hardened officer with extensive experience in the Iraq and Afghanistan wars, got a friendly reception from the panel and was told he would probably be confirmed.

If he gets the job, Kurilla would take over as the Pentagon continues to try to shift its focus to the Indo-Pacific and counter a rising China, and to bolster defenses against Russia in Europe. But Iran and Tehran-backed proxies have kept up a steady drumbeat of attacks on US and allied forces across the Middle East, often hindering plans to shift more troops out of the region.

Kurilla would replace Marine Gen. Frank McKenzie, who is retiring after three years leading the command. McKenzie has overseen a tumultuous time in the region, with America’s chaotic withdrawal from Afghanistan, the dismantling of the Islamic State in Iraq and Syria, and escalating threats from Iran and its proxies as they launch more attacks against Saudi Arabia, the United Arab Emirates and ships at sea.

See also  Cost of living crisis: Government must not allow music to be sacrificed as soaring bills push lessons out of reach for many – Linda Boyd

Kurilla, who is currently the commander of the 18th Airborne Corps, told the committee that after the hearing he was deploying to Germany as part of the US effort to reassure allies concerned about Russia’s military build-up along Ukraine’s borders.

Asked about the potential for repercussions in the Middle East of a potential Russian invasion of Ukraine, Kurilla said he believes that it could spill over into Syria, where Russia already has a military base and troops.

“If Russia does invade Ukraine they would not hesitate to be able to act as a spoiler in Syria as well,” said Kurilla, who previously served as a deputy at Central Command.

He added that the US doesn’t believe Russia wants to go to war with the United States.

On China, Kurilla said 18 of the 21 countries in the Central Command region have signed strategic agreements with Beijing, which has increased its development in the Middle East. The US, he said, has to be able to counter China there.

Senators quizzed Kurilla on efforts to monitor al-Qaida and Islamic State extremists in Afghanistan, now that there are no longer US forces in the country. He said efforts continue to work with surrounding nations to set up “over-the-horizon” capabilities.

The US, which left Afghanistan at the end of August, has been struggling to negotiate with a number of countries in the region to allow overflights, basing or other intelligence gathering from within their borders. Military leaders say it is difficult to monitor extremist groups from afar because doing so requires long drone flights that allow limited surveillance time.

Asked about working with the Taliban, Kurilla said the US should take a pragmatic approach. He said the Taliban also views the Islamic State group as an enemy, so that may be a potential area of ​​agreement. He also said the US must find ways to deal with the humanitarian crisis in Afghanistan, and that may involve Taliban help with food deliveries.

Kurilla graduated from the United States Military Academy at West Point in 1988, and has served multiple tours in Iraq and Afghanistan, commanding conventional and special operations forces. He commanded a Stryker battalion in Iraq in 2004, and was shot and wounded.