Skip to content
Home News US: Civilian toll in Syria raid may be higher than thought 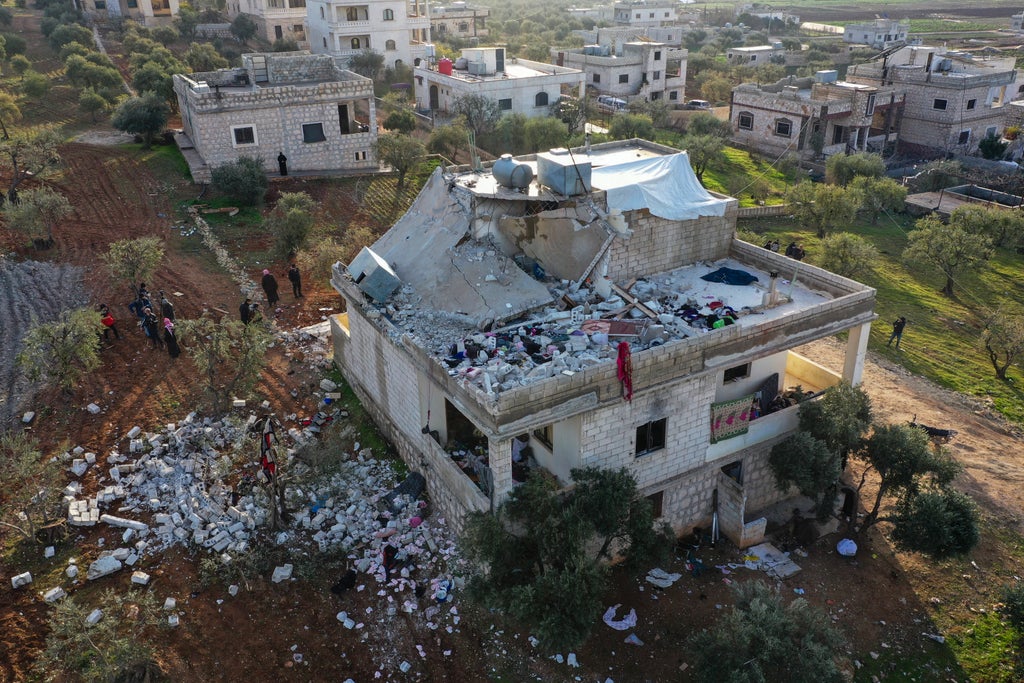 US military officials say there could have been more civilian casualties than initially thought in the raid that killed the top Islamic State leader in Syria last week, but they believe any such deaths were caused by the militant’s suicide bomb and were not at the hands of American forces.

Laying out a chronology of the raid by special operations forces, officials also said Thursday they cannot be certain that Abu Ibrahim al-Hashimi al-Qurayshi detonated the bomb that killed him and his family at his home in the sleepy village of Atmeh near the Turkish border.

But they said it was set off by him or someone else on the third floor of the building where he lived. Previously the Pentagon and President Joe Biden had said al-Qurayshi blew up himself, his wife and two children. The military officials said Thursday they believe the upper floor was rigged to explode and that it’s most likely al-Qurayshi did it, not one of his family members of him.

They also said it’s possible that others — perhaps additional wives he had — could have been with him and killed in that blast. They said the blast threw “multiple bodies” from the building and buried them in the rubble, and while they know al-Qurayshi and his family of him died, they ca n’t rule out the possibility that other bodies were hidden in the collapse and not seen by the troops.

Speaking to a small group of reporters, two senior military officials involved in the planning or execution of the operation provided the most details to date on the Feb. 2 raid, pushing back against claims by residents and activist groups that the US operation killed as many as 13 people, including civilians. They spoke on condition of anonymity as a condition for providing the briefing.

The Biden administration and the Pentagon have come under sharp criticism recently for failing to provide evidence for a number of national security claims, including proof of their efforts to avoid civilian casualties in operations such as the Syria raid and their account of a suicide bombing in Afghanistan in August.

Questions about the administration’s credibility are coming at a critical moment as it is revealing intelligence about Russia’s plans for Ukraine, while often not providing evidence to back up its assertions.

A journalist on assignment for The Associated Press as well as several village residents said they saw body parts scattered near the site of the Syria raid, a house in the rebel-held Idlib province. The Britain-based Syria Observatory for Human Rights and the opposition-run Syrian Civil Defense, first responders also known as the White Helmets, said 13 people, including children and women, were killed in the shelling and clashes that ensued after the US commando raid . It’s not clear whether those included al-Qurayshi and his family.

On Thursday, the military officials acknowledged they have no video of the house explosion in Syria or of the efforts to get civilians out of the house. According to the military, a family with four children on the first floor responded to calls from the troops and interpreters and got out of the house to safety. As they left the house, the explosion tore through the third floor, sending bodies to the ground.

Omar Saleh, a resident of a nearby house, said his doors and windows started to rattle to the sound of low-flying aircraft at 1:10 am local time. He then heard a man, speaking Arabic with an Iraqi or Saudi accent through a loudspeaker, urging women to surrender or leave the area.

The US military, said one official, did not see indications of other noncombatant casualties but cannot rule it out because the forces were not on the ground long enough to dig through all the rubble.

Military officials said, for the first time, that people in the house shot at the troops before the Americans started to enter the building after the explosion. An IS member, described as a lieutenant of al-Qurayshi’s, and his wife of him were on the second floor, with as many as five children. Officials said US forces killed the militant and his wife in a gun battle. One was barricaded in a small room and shooting from there; another fired while coming through the door.

The troops safely brought four children from the second floor out of the house. But a toddler was found dead there, and the military officials said Thursday that it is not certain how the child died. They said no gunshot wounds were found and that the child was likely killed by the concussive effects of the third-floor explosion and not shot in the gunfight.

According to the AP journalist who went to the site, blood could be seen on the walls and floor of the remaining structure, which contained a wrecked bedroom with a child’s wooden crib. On one damaged wall, a blue plastic children’s swing was still hanging. The kitchen was blackened with fire damage.

The officials said two al-Qaida-linked militants with automatic weapons approached the house in an effort to attack the US forces and were killed. But the officials said other armed citizens in the area were not harmed because they did not pose a threat.

Explaining the lack of video of the house explosion, the officials said the team was watching the building and overhead surveillance was focused on the surrounding area to detect any potential threats to the force. They said there is also no body-cam video.

The officials also revealed that the US, which wanted to capture al-Qurayshi alive, had made plans to turn him over to another government. One official said the US would have detained him temporarily, but there were no plans for a long-term US detention. They declined to provide further details, saying they wanted to protect “government-to-government” discussions.

Al-Qurayshi took over as head of IS in October 2019, just days after leader Abu Bakr al-Baghdadi died during a US raid. Officials said planning for the new raid began last fall when the US first learned of al-Qurayshi’s presence from him in the building.

Unlike his predecessor, al-Qurayshi was far from a household name. He was a secretive man who officials said never left the house during the months that the US watched and prepared for the raid. Officials said they thought they had a good chance at taking him alive because he only had one leg, which they believed would make it difficult for him to get to a suicide vest.

The blast, they said, was much larger than one from a regular suicide vest, which often holds just five or 10 pounds of explosives.

They said they chose a ground raid in order to avoid innocent deaths, despite the increased risk to the forces.

Ghaith Alsayed, a journalist on assignment for The Associated Press, contributed to this report from Idlib, Syria.