Ellie is searching for a new home (

She didn’t come into contact with a human for the first two years of her life – but is now searching for a loving home after being rescued by the RSPCA.

Border collie Ellie has been learning how to socialize with people after being trapped inside a ramshackle barn.

The three-year-old dog was rescued by RSPCA workers from the hellhole along with 44 other dogs, in January last year.

The pack of pups were riddled with parasites and struggling for food in Ceredigion, mid Wales.

Ellie was one of 44 dogs rescued by the RSPCA
(

Their owner agreed to work with the RSPCA when “the situation got out of control” meaning they couldn’t meet the dogs’ basic needs.

It’s Ellie may have never even been outside, let alone interacted with humans before.

But the poor pup has faced further heartbreak since, with her search for a forever home being unsuccessful.

Ellie has spent more than 400 days searching for a new owner.

She is now one of RSPCA Cymru’s longest-staying dogs at their Bryn-y-Maen centre, along with five-year-old crossbreed Charlie, from the same rescue.

Charlie was so terrified when he was taken into the charity’s Newport center that he spent the first six weeks of his stay cowering in the corner of his kennel.

Bryn-y-Maen’s manager, Victoria Williams, said: “When Ellie arrived at the center she was unsocialized and understandably nervous.

“She’d been living rough in inappropriate conditions in a dilapidated outhouse with 44 other dogs and had never experienced a normal life, so we’ve worked really hard to build up her trust and confidence.

Ellie is learning how to socialize with people
(

“For the first couple of months we’d sit outside her kennel and throw in high value treats for.

“Once she was comfortable with that we fed her through the kennel bars before letting her out in the main block, leaving food bowls in different areas and gradually introducing more staff around her.

“The next step was to get her used to a collar and a lead, and about three months after she arrived, she was finally ready to go for a walk.

“It was really important not to rush Ellie and to let her do everything at her own pace.

“We took in five other dogs from the same farm and whilst they have all been rehomed since, Ellie is still waiting.

“She’s been with us a long time and has seen her friends from the barn all go off to new families, so we’d really love to see her settled and happy in her own home after everything she’s been through.”

Ellie will need a quiet rural or semi-rural environment with understanding owners who are going to be able to continue to build her confidence in an adult-only home as the only pet.

Do you have a dog story to sell? Email [email protected] 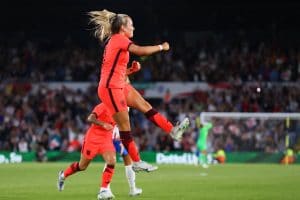