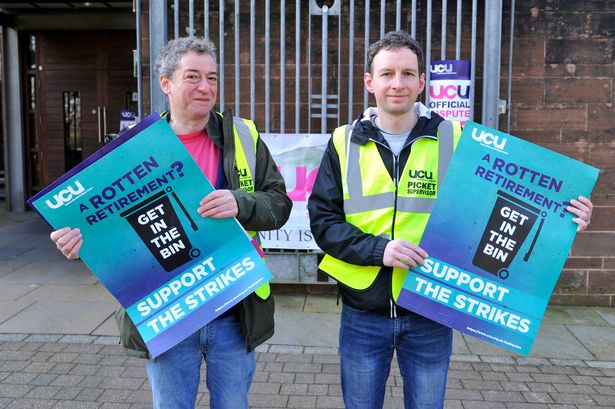 University staff in Dumfries have started a five-day strike over pay, work conditions and pensions.

The UCU said last month that employers forced through pension cuts which will see a 35 per cent reduction in a typical member’s guaranteed retirement income.

The union is demanding that employers revoke their cuts and re-enter negotiations.

UCU general secretary Jo Grady said: “Vice-chancellors across the UK have the power to end these disputes.

“The money is there to pay staff properly, tackle punishing working conditions and reverse pension cuts that will devastate retirement incomes.

“Instead, university bosses are choosing to sit on reserves worth tens of billions of pounds and make their own staff suffer. That’s why we are out on picket lines yet again.

“By continuing to ignore the long-standing and serious concerns of staff, vice chancellors are not only pushing their own workforce to breaking point, but also doing serious harm to the future of higher education and preventing it from being the best it can be. ”

This is the third round of strike action of the academic year by members of the UCU, following 10 days of walkouts between February 14 and March 2 and three days of action in December.

A USS spokesman said: “We understand the concerns of USS members, but the fundamental truth is that the price of promising a set, inflation-protected income for life in retirement – paid no matter what happens to the economy or the higher education sector in future – is much more expensive today than in the past.

“The decisions made by the joint negotiating committee respond to the challenges presented by long-term economic and demographic trends by slowing the pace at which USS pension promises build up in future.

“USS remains one of the relatively few private defined benefit pension schemes in the country still open to new members and still offering valuable guaranteed benefits to its members.”

A Universities UK spokesperson, on behalf of employers, said: “Taking university staff out on strike again will not remove the need to reform USS to ensure it remains affordable for members and employers.

“The package of reforms proposed by employers has now passed the joint negotiating committee and the USS Trustee Board, and will be implemented from April 1, 2022.

“With news of more strikes and yet another ballot, reasonable onlookers will conclude the union has an ideological fixation with strike action and is determined to pursue it, no matter the cost. Since 2019, an average member of staff earning £55,000 per annum taking strike action has forgone over £4,800 in pay deductions, to no avail.

“Recent government announcements underline the wider financial uncertainty universities are facing, and with the 2020 valuation now concluded, it is time to look forward and identify lasting improvements to USS that can be made ahead of the next valuation.”