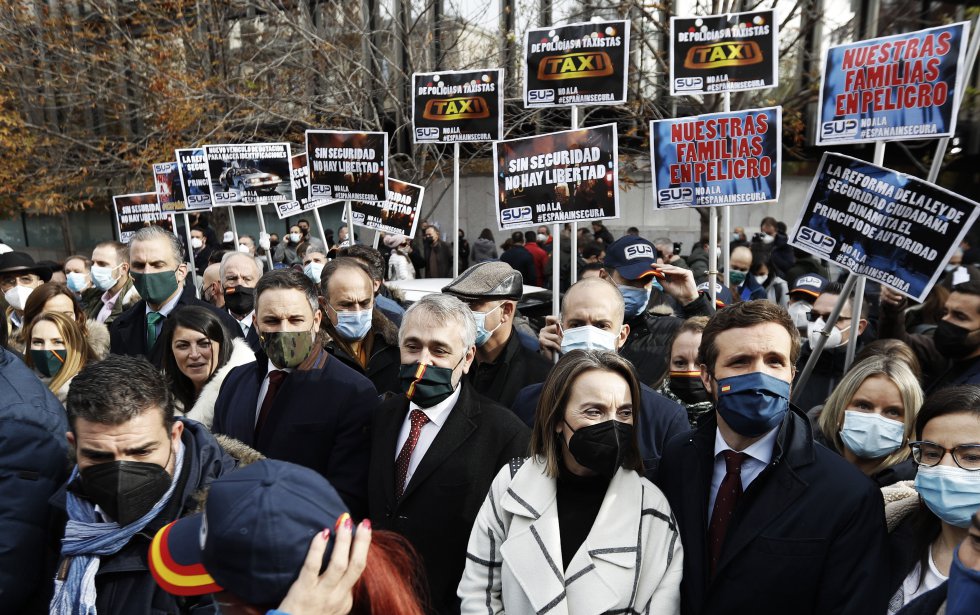 The political row for the reform of the citizen security law, known as gag law, reaches Europe. The parliamentary group of United We Can has asked the Venice Commission – an advisory body of the Council of Europe made up of experts – to show its “deep concern” in the face of the frontal opposition that PP has shown in recent weeks, with a demonstration and public statements , Vox and Ciudadanos, as well as most of the unions and police associations. In a letter signed Pablo Echenique and Enrique Santiago, spokespersons for their parliamentary group, the coalition denounces that the three right-wing parties and the fifty police groups have started a campaign to “confuse Spanish public opinion about the convenience of the reform [de la ley mordaza]”With the“ conscious and demagogic ”dissemination of“ false ”arguments. The document also points to the lack of impartiality of some representatives of the agents when affirming that their conduct and the demonstrations of the last weeks “deviate” from the legal obligation they have to enforce the law and defend “equally and without treatment. of favor ”to all“ people, organizations and political parties ”.

United We can emphasize that the reform of the gag law that Congress is going to address had been repeatedly demanded since 2018 by both the European Commission and the Venice Commission. This last advisory body, made up of independent experts appointed by the 61 member states, raised last March the need for Spain to make an “in-depth” evaluation of the practical operation of the regulations and their impact on human rights, in view of the its “repressive potential.” The European Commission, in its opinion on the rule of law in Spain on July 27, expressed its “concern” and “concern” about certain aspects of the law and, specifically, those referring to “the principles of proportionality, non-discrimination, efficiency and respect for rights and freedoms ”. This body, which made reference to the report of the Venice Commission, also stressed the need to assess “the practical operation of the law.” And he asked Spain to take his opinion into account during the review of the law. The parliamentary group stresses that the changes proposed in the article jointly articulated by United We Can and the PSOE – and which it lists in its writing – seek to follow precisely these recommendations.

For this reason, the document asks the Venice Commission to rule against “the public positioning of certain political formations [en referencia a PP, Vox y Ciudadanos] and professional police organizations ”against the reform of the law, considering that with them“ an interpretation contrary to the consolidated European legal and cultural heritage for the protection of human rights is germinating in Spain ”. As an example of this, the letter reviews the demonstrations made in recent weeks by the leaders of the three parties of the Spanish right -Pablo Casado, Santiago Abascal and Inés Arrimadas-, as well as other leaders of these formations. In this way, he recalls that the leader of the PP described the reform as a “shackle” and predicted that “it will generate that the agents are completely tied up and remain sold to the criminals.”

United We can emphasize that with these messages, the parties of the Spanish right are “spreading in a conscious and demagogic way the false argument that this reform seeks to end public security and deprive the security forces and bodies of the minimum elements and tools. necessary to carry out their work ”. For the coalition, these demonstrations “are expressing conceptions about the use and purpose of the legislation on citizen security that are antagonistic to the recommendations” of both the Venice Commission itself and the European Commission.

The letter is also critical of the position taken by the unions and police associations, which on the 27th of Madrid brought together 20,000 people in a demonstration in the center of Madrid with the reform of the law in which the leaders of the three parties participated. right. Police organizations have already announced concentrations before Congress for the next few weeks, making them coincide with the start of parliamentary work to reform the regulation. United We can emphasize that the modifications to the gag law The ones that the police representatives have been most critical of are precisely those raised by the Venice Commission.

Specifically, those that refer to the elimination of sanctions for the recording and dissemination of police actions when they do not affect the privacy or security of the agents; the reference to the presumption of veracity of the agents respecting the principle of presumption of innocence; the holding of peaceful demonstrations without the need for prior communication in certain cases; and the proposal to formalize and reduce the harmfulness of riot control equipment, in reference to rubber balls. For United We Can, the attitudes and manifestations of the police in their opposition to the reform of the gag law They have included “conduct” that they consider to go against their obligations, as members of the security forces, “not only from the Spanish Constitution but also from the international Treaties to which Spain is a party.”

One of the signatories of the letter, Enrique Santiago, current Secretary of State for the 2030 Agenda, has influenced this Monday in an interview the Ser chain in these criticisms of police organizations. “The police unions are doing politics. The positions of the unions are of loss of neutrality and coordination with the political forces of the right and the extreme right ”, he assured. His words have been answered shortly after, in a statement, by the Police Justice (Jupol), the majority union among the agents of the National Police. Jupol considers them an attempt to “restrict the right of the police to demonstrate to demand the improvement of their working conditions” and insists that the organizations are “completely apolitical and nonpartisan.”

See also  What time does the Ronde start what and riders are racing?