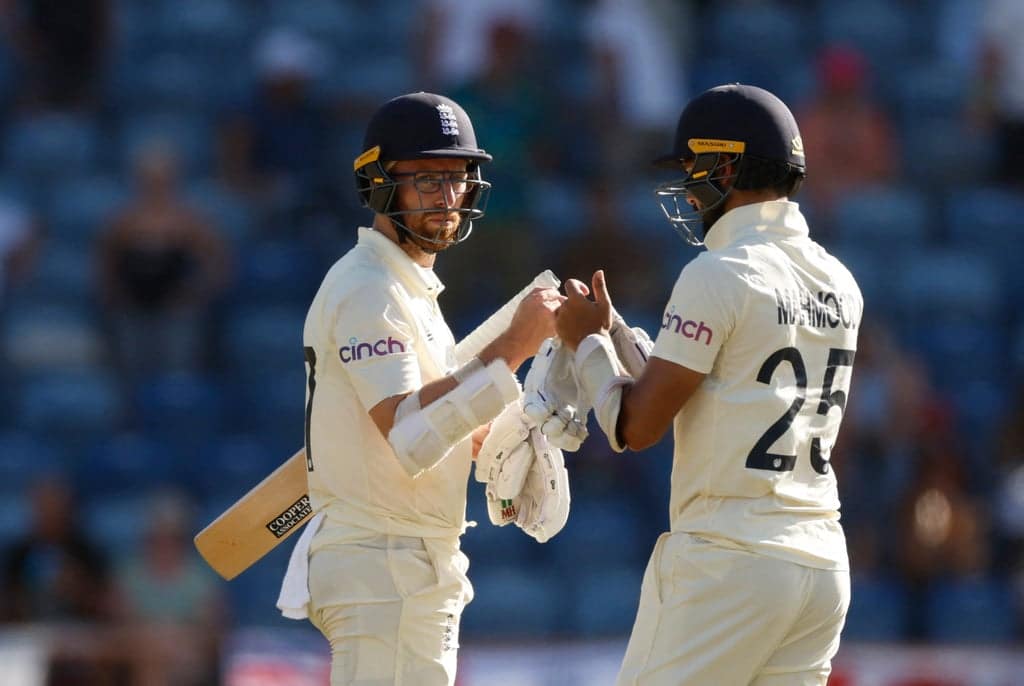 Of all the absurdity the England men’s Test side have served up over the last few years, it is hard to think of many that come close to this. There was, of course, the bad and the ugly: reduced to 67-7 on day one of this third Test in Grenada by West Indies, then circling the drain on 114-9. But thanks to the unexpected good from their two top-scorers, number 10 Jack Leach (41) and number 11 Saqib Mahmood (49), they find themselves in a workable position.

West Indies eventually finished the job, bowling the tourists out for 204 in the final over on Thursday. But by then, they had been stripped of the glee of their earlier brilliance, with a final wicket stand of 90.

For Leach, the side-kick at Headingley ’19, the nightwatchman who strummed 92 against Ireland in that same year, there were the familiarities of staunch defense and a propensity to drive. However at the other end, Mahmood, with a first class average of 12 and a previous best of 34 against the red ball, this was out of the blue. The 25-year old was the last to fall, agonizingly short of a first half-century in all forms of professional cricket.

The 218 balls faced registered as one of the longest stints for an England 10th-wicket stand since Joe Root and James Anderson faced 320 deliveries against India at Trent Bridge, way back in the summer of 2014. Unlike then, this pitch is far from a slag heap. After two dull stalemates, this one will produce a result in this winner-takes-all encounter. And, quietly, England might now fancy their chances after seemingly being dead and buried earlier in the piece.

The procession of wickets was set off by a brace of wickets for Kyle Mayers, the all rounder making his first appearance in this series for his 11th chap. You may remember him from his remarkable knock of him just over a year ago: 210 on Test debut to see West Indies over the line in a chase of 395 away to Bangladesh. Ever since, it has been his bowling that has done the talking, and there was plenty to shout about as he trimmed off the England skipper Joe Root for a nine-ball duck, nine deliveries after removing Zak Crawley in a five over burst in which he did not grant to run. He left the field before lunch with a hamstring complaint, but was not required in the afternoon session where his fellow seamers banded together to take 5-68.

As much as these were testing conditions that vindicated Kraigg Brathwaite’s decision to bowl first upon winning the toss, England’s batters can reflect on a clown car of loose strokes. Crawley (23-1) got us up and running with a tame chip to cover. Dan Lawrence (46-3) fell over to the off side and was pinned in front of all three. Stokes (53-4) was comically late on a pull shot, clothing it back to Alzarri Joseph – the first of three to fall for the addition of zero runs. Alex Lees – the second of that trio – felt for one outside off stump, as did the third, Jonny Bairstow. Ben Foakes (67-7) probably should have got forward to a Jayden Seals delivery that rushed through his gate and disturbed the stumps. Craig Overton (90-8) played down the wrong line, although credit should go to Roach for summoning such extravagant movement to take a ball from out wide and into…stump.

Chris Woakes and Leach stemmed the flow, with the latter unfurling a cover drive to take England to 101-8 to at least ensure this was not another double-figure capitulation. The pair held firm, making it through to tea on 114-8. No great shakes but with scope to add sine necessary runs in the evening.

It was a plan that lasted just two balls: Seals yorking Woakes (25) immediately after the break, ending their partnership of 24 which, dispiritingly, was England’s highest at the time. It was bettered with the final stand between Leach and Mahmood.

Their method was simple, and aided by an older ball and wearying bowlers: occupying the crease, keeping everything out and throwing hands at anything with a hint of width. They grew more assured, gradually eking out runs with more comfort. Particularly Mahmood, who looked as assured as he ever has against a red ball.

Along with that new career best was a first six, swatted high over wide mid on after a bit of a charge. And the Lancashire quick registered the team 200 with a fine off-drive for one of his five boundaries. In the final over, he charged Jermaine Blackwood to hit down the ground for a bullet of a four. Then, on 49, he tried to hit a wide ball too hard to move to a half-century maiden, playing instead onto his own stumps.

The celebrations around him were more relief than anything else, as the innings finally closed in the 90sth and last over the day. The frustration for West Indies was still evident as they were traipsed off, especially given the opportunities they had to see one of these final two off. Leach was dropped at first slip when he had just 10, which would have made it 110-9. Mahmood should have been caught by John Campbell to close out the innings at 149.

The dropper of the first and the bowler for the second was Mayers. A day that started with his exuberant celebration of him ended with plenty for him to rue. Moreover, England will breathe a sigh of relief that, somehow, they finish one day still in this game. Given the lavish movement throughout the day which should be replicated on Friday, they are perhaps about par.