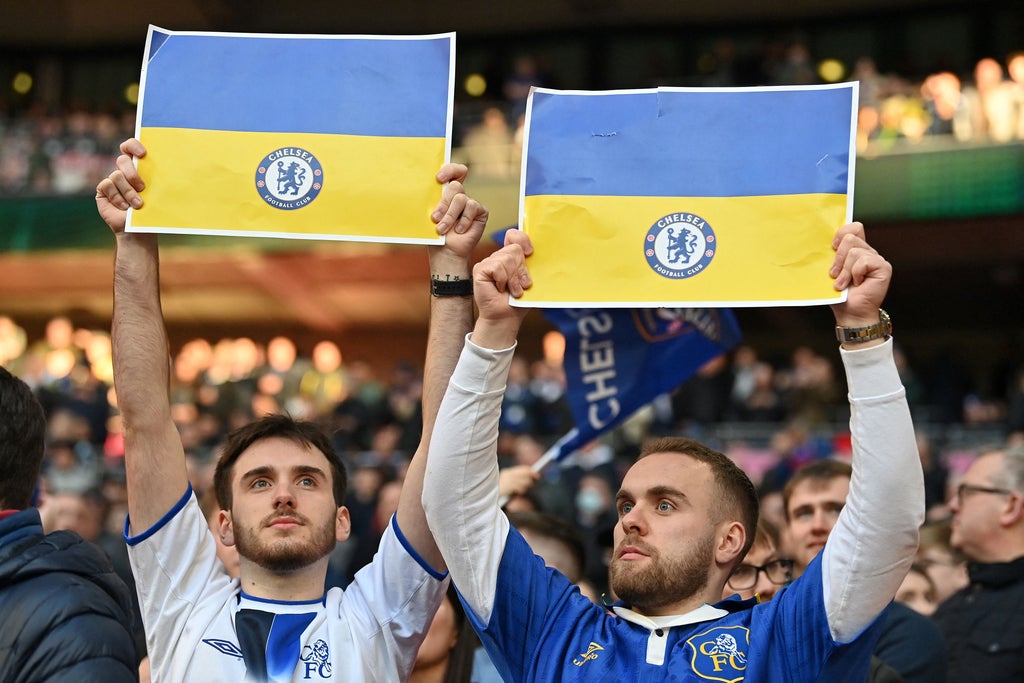 Chelsea had just lost a cup final, but it was nowhere the biggest issue of the day. That was a question put to a disappointed Thomas Tuchel, and it was about the man more responsible than anyone else for putting the club on so many such occasions.

That is what happens now with Roman Abramovich, after the shock announcement on the eve of the game that he was “giving trustees of Chelsea’s charitable Foundation the stewardship and care” of the club.

That wasn’t too long after Tuchel and his players found out, or some members of the trust. It points to the abruptness of the move, although the German insisted things would continue as normal.

“I think it will change nothing for me on a daily basis, that’s how I understand it,” Tuchel said. “I’m in close contact with Marina [Granovskaia] and [Petr] Cech to run the first team. I think our ability will not change with the news.”

The truth there, no matter how much anyone talks now, is that only time will tell. Much will depend on developments in a hugely volatile real world, which is fitting for a takeover that was one of the most important moments in football history. It put the game in a new world, certainly a new world of expenditure, and it’s at least arguable that the takeovers of Manchester City and Newcastle – not to mention a host of other deals involving foreign owners who help swell the immense financial, social and political capital of Premier League clubs – would not have happened without it.

Abramovich has been one of the most influential figures in the game.

Labor MP Chris Bryant, whose initial comments in the House of Commons brought so much of this to the fore, insisted on Sunday he would “continue to call for the UK to sanction him and seize/freeze assets” and that would remain the case “ unless and until he condemns the criminal invasion of Ukraine”.

For now, Tuchel is right. Not too much changes. Abramovich is still the owner of the club. The move didn’t have any legal consequences.

The day-to-day running of Chelsea remains as it was, with Granovskaia in charge, and the only real difference is that long-term strategy decisions will be put to the board of trustees. It is possible, too, they would be the ones to field any offers for potential sales.

That is where it also gets more interesting.

Two of the trustees, chairman Bruce Buck and Sebastian Coe, could be seen at the League Cup final but the game was preceded by reports in the Daily Telegraph that some of them want certain questions answered and are still considering the request.

Among their concerns are whether running a club is compatible with charity law and who they would ultimately be answerable to. There is also the key question about whether it would be – or be seen to be – a “front for Abramovich”.

This is one of the problems all this has raised. The wording of Chelsea’s statement on the Russian invasion also ended up just bringing more criticism.

The whole situation has put the club in danger of suffering reputational damage, while there is even the possibility of difficulty in attracting sponsors. The club are currently trying to work through these discussions.

Perhaps the most significant element is the belief from those within the club that Chelsea would be “insulated” if the Russian-born billionaire was sanctioned, with the club’s assets “ring-fenced”.

That could still have a tangible effect, though, as it could prevent Abramovich investing. If that were the case, it could certainly change the complexion of Chelsea as a club, as well as the landscape of the Premier League.

It could at the very least see them become a club run more akin to Tottenham Hotspur, without the ability to spend so much. That might mean no more big signings, no more place at the absolute top table – perhaps the end of Chelsea as a ‘super club’.

They might well get into a situation where they can’t really afford to leave record signings like Romelu Lukaku on the bench like they did at Wembley.

It could change something else for the club, though. Chelsea insist they are not up for sale, but interested parties – and there are a few – do now feel that the situation plays into their hands, and at least makes the situation more likely.

The ultimate reality is that the future of the club is more uncertain now than at any point since before Abramovich took over.