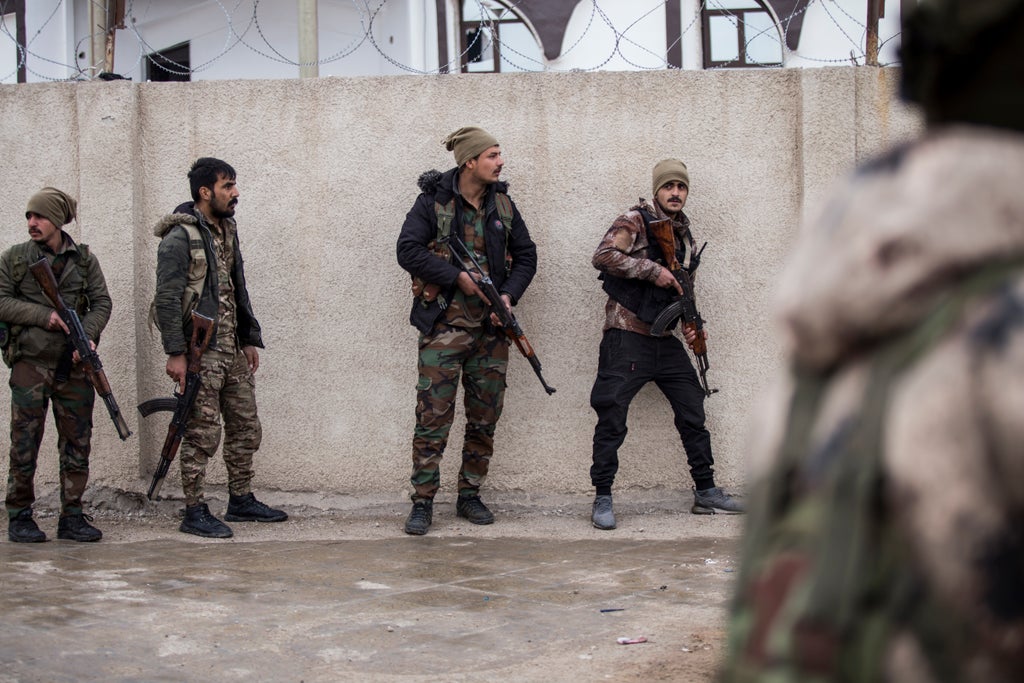 The attack by Islamic State militants on a Syrian prison housing some 3,000 of their fighters and some 700 children is a predictable tragedy that highlights the need for urgent international action to deal with people believed to be linked to the extremist group in prisons. and camps in the northeast of the country. the UN counter-terrorism chief said on Thursday.

Deputy Secretary-General Vladimir Voronkov told the UN Security Council that the Islamic State group “has been highlighting and calling for jailbreaks” and “there have been previous cases in Syria and in other parts of the world.”

Most of the men, women and children with suspected links to the Islamic State who are held in Syrian prisons and camps “have never been charged with any crime, but remain in prolonged detention, not knowing what their fate will be”, said the head of the UN Counter-Strike Office. Terrorism said.

Using the Arabic acronym for the extremist group IS, he said: “It is also a reminder of why Da’esh continues to embed itself in Syria.”

Secretary-General Antonio Guterres warned that Da’esh’s threat is growing, including in Syria, where Voronkov said it is organized in small cells “hidden in the desert and in rural areas, as they cross the Iraqi-Syrian border to avoid their invasion.” capture. .”

The latest incident at Gweiran prison, also known as al-Sinaa, located in the northeastern city of Hassakeh, is the largest by IS militants since the fall of the group’s “caliphate” that once encompassed significant parts of Syria. and neighboring Iraq in 2019. .

Voronkov said the fighting had also affected the civilian population and caused an unknown number of fighters from the Islamic State, also known as ISIL, to flee.

US-backed Kurdish forces said on Wednesday they took control of the last section of the prison controlled by Islamic State militants and freed several child detainees they said had been used as human shields, but Voronkov said the clashes “continue”.

The counterterrorism chief said he was “appalled” by reports that children, who should never have been in military detention, were used as human shields. “Although the barbarism of the group should not be surprising, these children have been victims of being used and abused in this way,” he said.

Voronkov reiterated his call for countries to repatriate suspected Islamic State fighters and their families in prisons and camps in northeastern Syria.

“The repatriation of third-country nationals from Syria and Iraq remains a top priority for the United Nations and we stand ready as a trusted partner for member states to respond to these challenges,” he said. “Daesh’s attempts to free its fighters from prison underscore the need to bring them to justice as soon as possible and ensure accountability to break the cycle of violence.”

UN Special Envoy for Syria Geir Pedersen told the Security Council on Wednesday that the IS prison attack “brings back terrible memories of the prison breaks that fueled ISIL’s original rise in 2014 and 2015.”

“I see this as a clear message to use all the importance of coming together to combat the threat of internationally proscribed terrorist groups and to resolve the larger conflict in which terrorism inevitably thrives,” Pedersen said.

Russia called the briefing on the prison attack and its deputy ambassador, Dmitry Polyansky, accused the United States of saying it complies with international humanitarian law that requires the protection of civilians in armed conflict but uses its air force and armored vehicles to clear the prison. of IS fighters.

He said the US ignored “measures to protect civilians” at the prison and elsewhere, including US airstrikes in Baghouz, Syria, in March 2019 that he said killed at least 80 civilians.

Deputy US Ambassador Richard Mills responded, accusing Russia of turning the council meeting “into a mass of disinformation fueled by rhetoric and, frankly, lies about the US role in Syria.” He said US forces are in the northeast as part of a coalition “for the sole purpose of continuing the fight” against IS extremists.

He said the Baghouz attacks are being investigated by the US Department of Defense in response to media reports, stressing that if there were a similar Russian airstrike tragically killing civilians “there would be no independent press to report.” about it, as there is very little Russian information. opposition available to raise the issue.”

Mills said the prison attack in Hassakeh underscores the threat the Islamic State continues to pose in Syria, as well as the risk of holding Islamic State detainees “in makeshift facilities in the region indefinitely.”

He called on member states to support the coalition’s efforts to ensure detainees “are housed safely and humanely in accordance with international standards.”