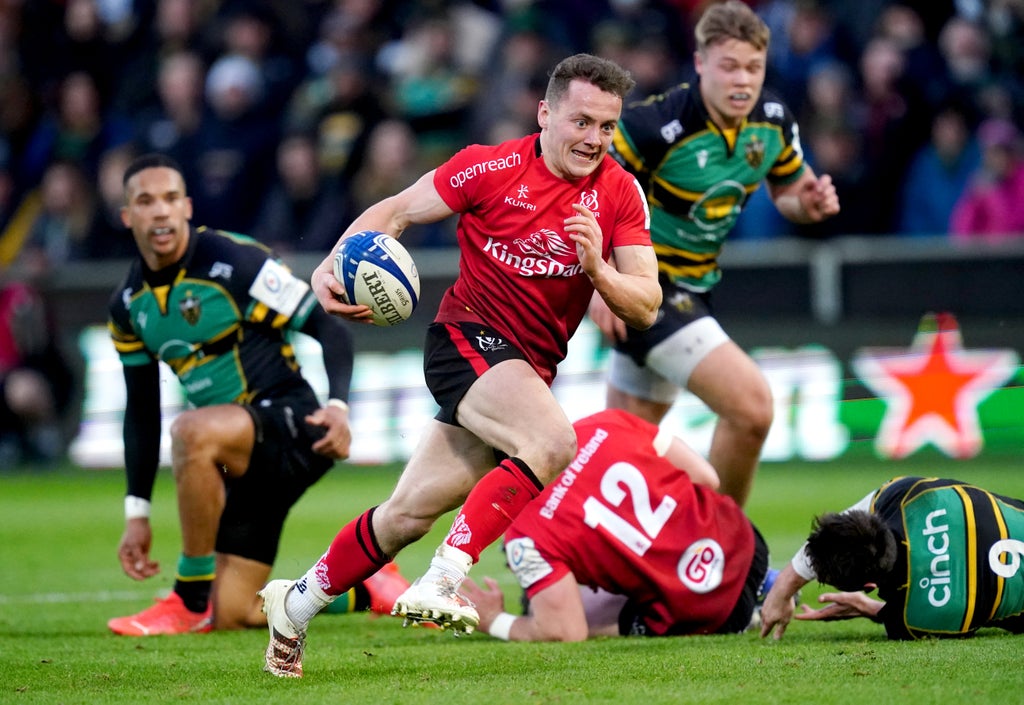 Ulster star Michael Lowry represents a “true beacon” for the smaller players and has been endorsed to shine on the international stage with Ireland.

The capless winger has found his way into Andy Farrell’s 37-man Six Nations squad after a series of electric performances for his province.

The fleet-footed Lowry, who stands at 5-foot-7, was written off by some people early in his career because of his height.

However, Ulster’s chief operating officer, Bryn Cunningham, was ‘impressed’ by the 23-year-old from the start, having first seen him perform for the Royal Belfast Academic Institution in a school cup game a few years ago. six years.

“If you had a checklist of things you would like in an ideal professional rugby player, Mikey pretty much ticks all the boxes,” Cunningham told the PA news agency.

“What he has shown, which is a real beacon for the smaller players, is that you can get to this level if you have the skill level but also the commitment around how you organize yourself defensively and offensively.

“His work rate and mentality around the physical part of the game is absolutely amazing. He hits harder than many guys twice his size.

“And then the most important of all of that is his point of difference, which is his footwork and his acceleration, which is just outstanding and I think that’s what everyone has been excited about.

“We’ve been very aware of that internally for some time, but for the outside world to now start seeing that on a regular basis is brilliant for the game.

“I think the vast majority want to see excitement in rugby and if Mikey is on the pitch there’s a good chance you’ll get it.”

Ireland begin the Six Nations at home to defending champions Wales on Saturday.

Initially, Lowry may have to be patient in pursuit of a Test debut, as Leinster’s Hugo Keenan has excelled in the number 15 Irish jersey.

When asked if he expected the talented man to return to the international stage for many years to come, Cunningham replied: “He has the ability to do it.

“The way he has progressed in the last few years and that X factor that he has, it will be very, very difficult to ignore if he continues to do so on such a regular basis.

“Where a few years ago people were perhaps doubtful whether he, because of his size, would have the ability to mix it up internationally, now we have seen him at the highest level of the Champions Cup against some of the best players in the world. Europe. and around the world he has been able to do that and more.

“So I would certainly have great faith that he would be able to reproduce that at the highest level.”

Belfast-born Lowry was named to the 2020-21 Pro14 Dream Team and trained at camp in Ireland last summer.

Cunningham, who played full-back for Ulster between 1997 and 2010, fondly recalls his initial impression of the player.

“I was immediately blown away by him in so many facets of what he produced that day,” the 43-year-old said.

“You could see something that was quite special and it was interesting because even at the time there were a number of naysayers saying it was too small.

“But any time you see something that special in a kid that age, you just can’t ignore it.

“There’s so much to him from a personal standpoint, he’s just a great person. His family can be incredibly proud of what they have produced because he is such a credit to them.

“Certainly, genetically speaking of what he has, he uses every ounce of that to great effect and I’d love to see him get a chance during the Six Nations at some point.”

Lowry lined up alongside his Ireland and Ulster teammate James Hume during their school days.

He specialized as a fly half back then and has expressed a desire to return to that role as his career progresses.

On that subject, Cunningham said: “He’s playing so well at 15 right now that why would you move him?

“But I have no doubt that certainly over time he could have opportunities, certainly at provincial level, to play some rugby as a 10-year-old as well.

“He has that string on his bow, plus 15, which is going to be really beneficial to him for many years to come.”