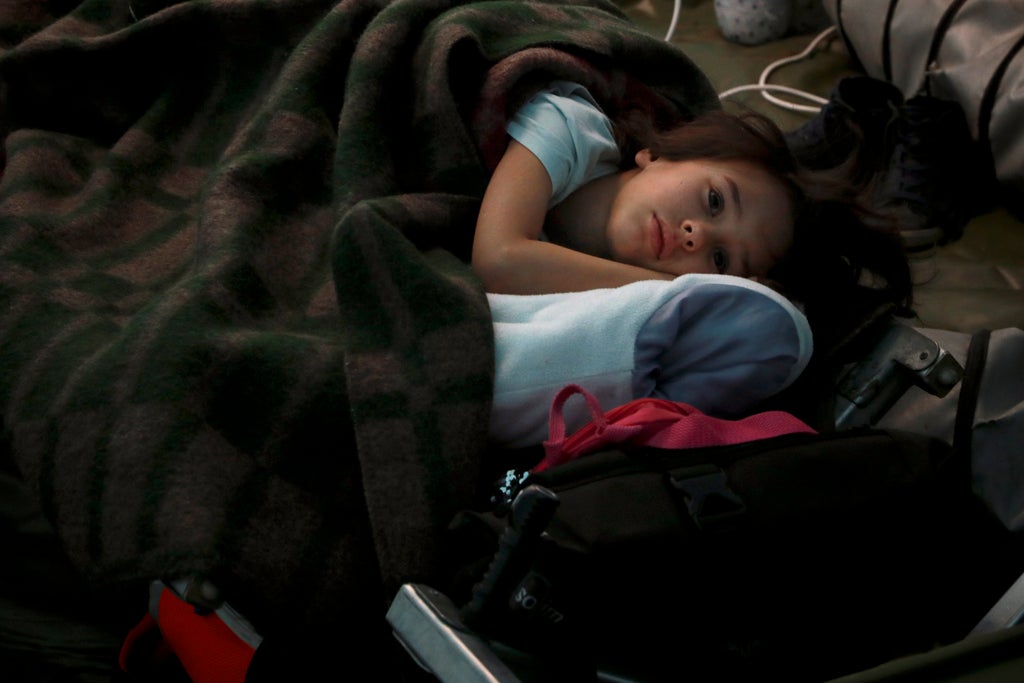 Thousands of Ukrainians are fleeing war at home by crossing the borders into countries to the west in search of safety as Russia pounded their capital and other cities with airstrikes for a second day.

Cars were backed up for several kilometers (miles) at some border crossings as authorities in Poland, Slovakia, Hungary, Romania and Moldova mobilized to receive them, offering them shelter, food and legal help. They also eased their usual border procedures, among them COVID-19 testing requirements.

At a major border crossing, in Medyka, Poland, Ukrainians arrived on foot and by car and train and were greeted by Polish authorities and volunteers offering them food and hot drinks.

Slovak police said that most of the people arriving at its border were women with children after Ukraine banned men ages 18 to 60 from leaving the country, and this appeared to be the case everywhere.

Some sought to join relatives who have already settled in Poland and other EU nations, whose strong economies have for many years attracted Ukrainian workers.

“We had to leave behind everything, our whole life’s work,” Sipon said, describing it as a “terrible feeling” to leave her property.

Erika Barta, arriving from Backi Breg, Ukraine, said she would seek shelter with relatives in Hungary and planned to return when the danger passes.

“It’s not safe at home anymore,” she said.

For many the first stop was a train station in Przemysl, a city near Medyka in southeastern Poland that is a transit point for many. Ukrainians slept on cots and in chairs as they awaited their next moves, relieved to escape the shelling of Kyiv and other places.

Italian Premier Mario Draghi spoke in Parliament on Friday of the “long lines of cars leaving Kyiv and other Ukrainian cities, heading mostly toward EU borders,” and said “it is possible to imagine a huge influx of refugees toward neighboring European countries.”

“The images we are seeing — of unarmed civilians forced to hide in bunkers and subways — are terrible and bring us back to the darkest days of European history,” he said.

The UN refugee agency, UNHCR, estimated that more than 100,000 people were believed to have left their homes in Ukraine and that up to 4 million people may flee to other countries if the situation escalates.

Hungary, which mobilized its military to help, announced in a decree this week that all Ukrainian citizens arriving from Ukraine, and all third-country nationals legally residing there, would be entitled to protection.

The welcome that Poland and Hungary are showing Ukrainians now is very different from the unwelcoming stance they have had to refugees and migrants from the Middle East and Africa in recent years. Hungary built a wall to keep them out when a million people, many Syrians fleeing war, arrived in Europe in 2015.

Poland is now building its own wall with Belarus after thousands of mostly Middle Eastern migrants sought to enter from Belarus in past months. The EU accused Russia-backed Belarus of encouraging that migration to destabilize the EU. Some of those people denied entry into Poland died in forests.

But Ukrainians are a different matter altogether — Europeans who are mostly Christian, and to the Poles, fellow Slavs with similar linguistic and cultural roots.

Transcarpathia, Ukraine’s westernmost region which borders Hungary, is also home to about 150,000 ethnic Hungarians, many of whom are Hungarian citizens. While Russia’s invasion has not yet extended to that area, which is separated from the rest of Ukraine by the Carpathian Mountains, many have decided not to wait for the situation to get worse.