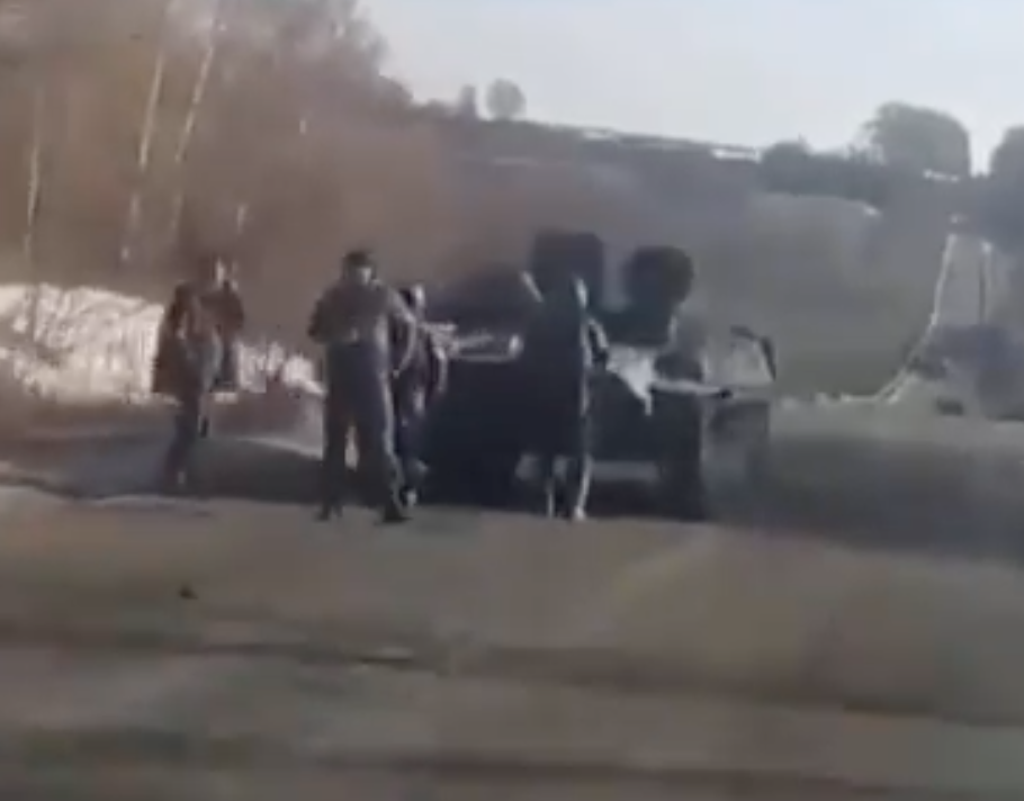 A Ukrainian man has filmed himself offering to tow an enemy tank back to Russia, after spotting the assault vehicle apparently having ground to a halt in the middle of a motorway.

The latest in a series of viral clips of Ukrainians bravely confronting Russian troops shows the driver pulling up alongside the motionless military vehicle, and asking several soldiers from his open window whether they have broken down.

Upon being told that they have run out of fuel, the driver prompts laughter from the soldiers as he asks: “Can I tow you back to Russia?”

According to translations on social media, he then tells the soldiers they are en route to Kyiv after they fail to tell him where they are supposed to be going.

Asked by the soldiers for news on the invasion, he tells them that Ukraine is winning the war while Moscow’s troops are good at surrendering because “they also do not know where they are going”.

As a parting shot, the Ukrainian claims to have asked “the whole column” of Russian vehicles advancing towards the capital but that “no one knows where they are and where they are going”. The footage shows him driving past yet another stationary tank within 30 seconds.

It is not the only report of Moscow tanks running out of fuel as Vladimir Putin’s invasion of Russia’s sovereign neighbor enters its third day, with a UK government minister among those suggesting the Kremlin’s plan “is nowhere near running to schedule” amid strong Ukrainian resistance.

A Ukrainian military Facebook account claimed on Friday that Russian troops stopped near Konotop, north east of Kyiv, had “a problem with fuel and supplies”, alleging that some invading soldiers were walking around with gas canisters “trying to buy fuel” and others were “demanding food from the local population” while businesses had been looted.

See also  Liam Gallagher has launched a £15 fashion collection in a major high street store - and it's not Primark, New Look or H&M

“The main armored columns approaching Kyiv are still some way off. That is a testament to the incredible resistance the Ukrainian armored forces have put up over the last 48 hours or so,” UK armed forces minister James Heappey told Sky News on Saturday.

“I think that will be a great cause of concern for President Putin and rather points to the fact that there was a lot of hubris in the Russian plan and that he may be awfully advised.”

Fighting intensified overnight in the Ukrainian capital, as small Russian raiding groups’ attempts to infiltrate the city saw street skirmishes break out, as Moscow’s forces continue to advance on Kyiv from multiple directions.

But the UK Ministry of Defense said on Saturday that the speed of the Russian advance had “temporarily slowed down likely as a result of acute logistical difficulties and strong Ukrainian resistance”.

“Russian forces are bypassing major Ukrainian population centers while leaving forces to encircle and isolate them,” the ministry said in an intelligence update.