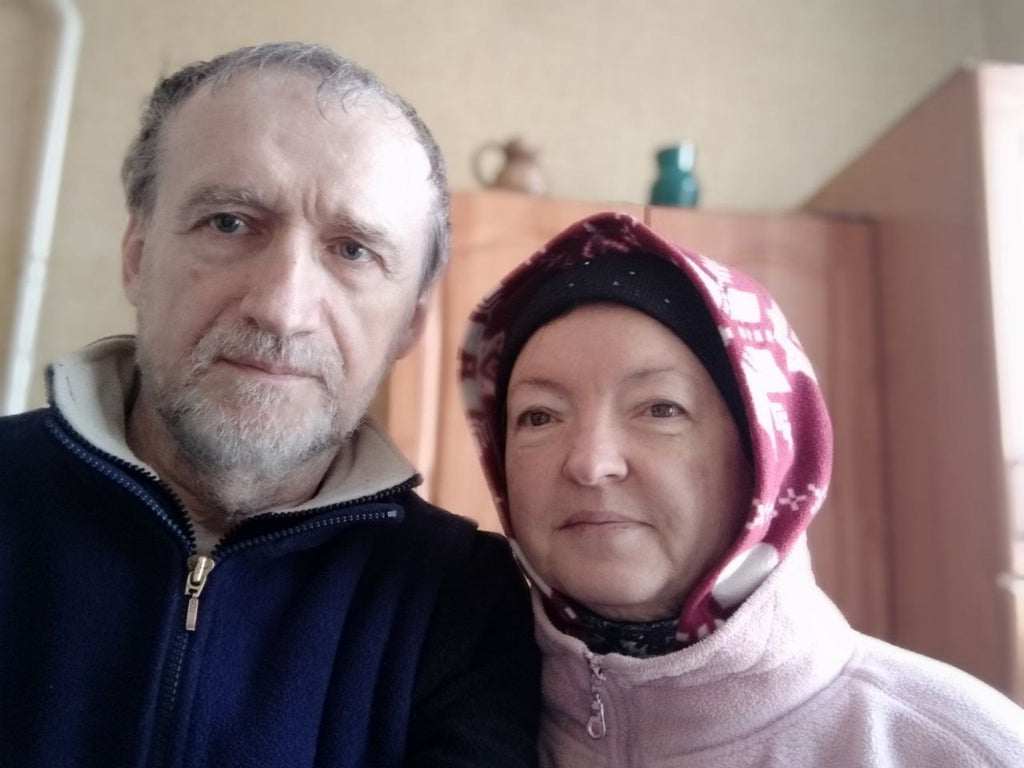 A Ukrainian man who escaped Mariupol has described life in the city as “real hell” after he witnessed blood and body parts covering its streets and Russian bombs destroying his neighbourhood.

Victor Mayevsky, 62, is now safe in Poland with his 63-year-old wife, Valentina, after enduring weeks of “constant” shelling, freezing temperatures and severe food and water shortages in the besieged city in south-eastern Ukraine.

The couple woke up at 5am to the sound of explosions on February 24, the day of the Russian invasion, and the shelling of their home district of Levoberezhny continued for weeks before they fled.

On the morning of the second day, the couple hid in a windowless corridor of their home after watching missiles strike houses and blocks of flats just 300 meters away.

On February 28 a missile landed three meters from their home but failed to explode – later being removed and neutralized by Ukrainian emergency services.

“All these days the shelling did not stop, sometimes there were breaks from 23.00 to 04.00 (and) during this period of time we tried to sleep, but sleep did not come easily,” he said.

“The night was moonless, there was no street lighting, but the sky was red due to the burning boathouse… it was real hell.”

Mr Mayevsky said the strikes had hit an electrical substation on February 27 and by the end of that day he and his wife had no light, water supply or heating.

With temperatures at minus 5C, the couple slept wearing “several shirts, sweaters and a jacket” and used their gas supply to cook food and warm themselves by reheating metal buckets of water.

With his internet access limited to pockets of phone signal in the surrounding area, he was left in an “information vacuum”, using an old battery-powered AM radio for news on the war.

On one of the days, Mr Mayevsky managed to find a signal with his mobile and get through to his daughter, who lives in Odessa, telling her: “We are alive.”

On the morning of March 5, his daughter informed him a ceasefire had been declared and a corridor would be made to allow civilians to evacuate from Mariupol.

“I immediately went to the garage for the car, noticing that the battery was almost empty… how glad I was when she started up!” he said.

He and his wife loaded two bags with clothes, food, money and their passports and drove through shrapnel and past burnt-out vehicles into the city center where an evacuation column was being formed.

But, despite the supposed ceasefire, Russian shelling continued and the evacuation was quickly halted.

Unwilling to return to their “very dangerous” home district, the couple stayed instead in an apartment with Mr Mayevsky’s 86-year-old aunt in the city center – where a bomb struck just days later.

“On one of the days around noon… an explosion of enormous force sounded near us: all the windows opened, from the street we heard the piercing cries of people,” he said.

“Through the window I saw… there was blood all around on the street, there were parts of the bodies of people, along with fragments of the wall of the house… it is hard to say how many people were killed and injured.

“A minute later, a neighbor came who was on the street at that moment and saw what happened… (she) was in shock, it was hard for her to breathe and speak, we tried to calm her down, gave her warm water.

“Later, the municipal service arrived at the site of the explosion and took away the bodies of the dead… in the city, the dead were buried right in the yards.”

On the day the couple arrived in the city center its gas supply was destroyed by Russian shelling, leaving Mr Mayevsky and others staying there to cook food on fires built in the courtyard of the block of flats – but supplies quickly depleted.

“We were lucky that snow fell, we collected it in buckets and stoked it on the fire to get some water,” he added.

“Those who ran out of water went to the spring… it was 20 minutes from our house and could cost their lives.

“It was scary to go there, and near the spring itself there were dead people who had not yet been removed.”

He and his wife spent their remaining days in Mariupol sleeping in a basement with 19 other people in freezing temperatures.

“Every day it became more and more difficult: the food was running out, and humanitarian aid could not reach our city due to the constant shelling of the green corridor,” he said.

“It seems that the Russian occupiers wanted to increase the death rate among civilians in Mariupol… it is terrible to realize that all these terrible things are happening in the 21st century, in Europe, in a country with 42 million citizens, in a city with a population of 500,000 people.”

On one of the days the couple sourced some packets of breadcrumbs, and from then on they would fill them with water for a meal he said was “something similar to semolina” – which they ate twice a day.

“But there was no feeling of hunger, there was no panic either, the thought that life could end at any second did not leave,” he said.

On March 15 Mr Mayevsky went to the Donetsk Regional Drama Theater in the city center – which would be bombed by Russia 24 hours later – to ask for information on how to leave the city.

They were then able to join a convoy out of the city, reaching a friend in Berdyansk who sold them fuel, before driving on to Zaporizhzhia in central Ukraine and later fleeing to Poland.

Russian bombardments have struck many civilian areas in Mariupol, where 100,000 people are still trapped, and Mr Mayevsky added: “My aunt is 86 years old… she often asked the question: ‘Why all these bombings, who needs them? For what?

“’During the Second World War during the occupation of Mariupol, there was no such horror!’

“’Even Hitler did not allow such atrocities as the Russian army (does) now!’”