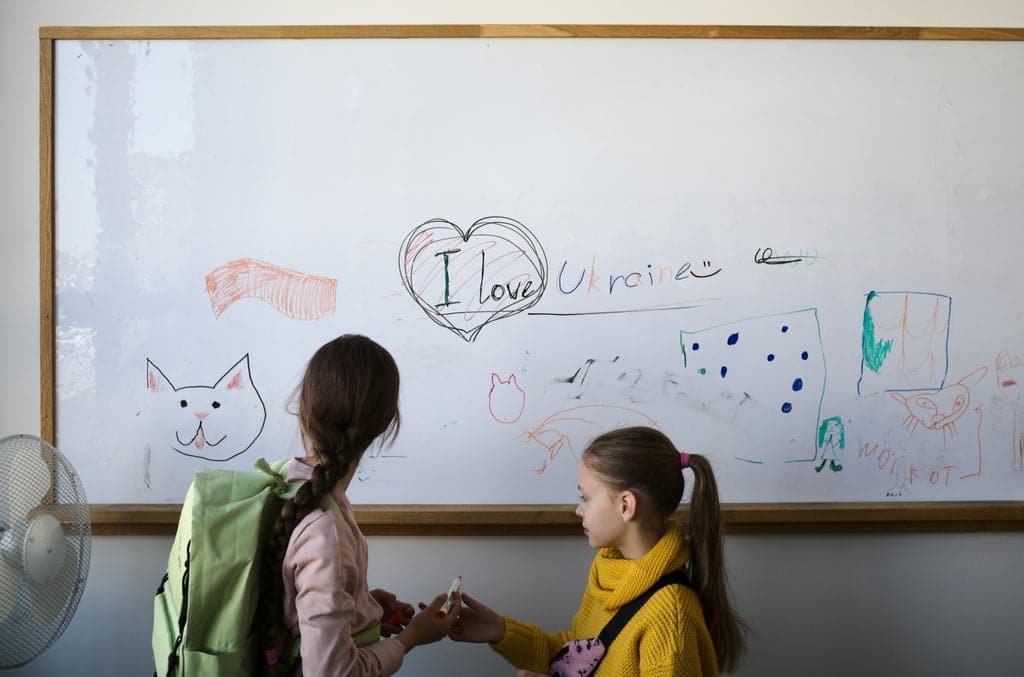 Ukrainian refugee Mariia Kerashchenko tightly clasped the hands of her two children as she walked them through the courtyard of a seedy Berlin building, up a graffiti-covered stairway, and into a modern, sunlit classroom.

Her 7-year-old son, Myroslav, is one of 40 children who started their first day of school Monday, only weeks after joining the millions flooding into Europe to flee the war in Ukraine.

Daughter Zoriana, who is 3, is still too young for the class, which is being taught by two Ukrainians who also fled to the German capital. The lessons, part of a volunteer initiative, will prepare the children for entering Berlin’s regular school system.

“It gets me emotional when I see all the help and solidarity here,” the 30-year-old Kerashchenko, from Vinnytsia in central Ukraine, told The Associated Press, her eyes welling with tears.

“Every day, I hope that we can go back to Ukraine, but it is too dangerous for now, so in the meantime it is wonderful that my son can go to school in Germany,” she added.

The classes for the refugees were put together by Burcak Sevilgen and Faina Karlitski, who in only two weeks raised the funds, organized the rent-free classrooms and advertised their program on the messaging service Telegram.

The children nervously clutched their new exercise books, sharpened pencils and erasers as their new teachers welcomed them in Ukrainian on the third floor of the former factory. They will follow their curriculum from back home and also take German language classes. The three hours of school each weekday will be followed by activities such as playacting, painting or handicrafts.

Natalia Khalil, 33, from Rivne in western Ukraine, is teaching the third and fourth graders, while Tatjana Gubskaya, 56, will be in charge of the first and second graders. Gubskaya fled Ukraine with her daughter de ella and a 7-year-old grandson, who is in her classroom de ella.

“The kids are grateful to have some kind of routine again and meet other children from Ukraine — they and their mothers have all been very stressed lately,” said Gubskaya, who also taught second grade classes before the Feb. 24 Russian invasion.

The teachers will be paid 500 euros per month in donations until they have work permits and can be officially hired.

Sevilgen, 36, one of the two people behind the refugee classes, is a Berlin teacher herself. She and her 31-year-old friend Karlitski, a management consultant, decided to do what they could to get at least some of the refugee children back into school quickly.

“We both have always had an eye for social issues and wanted to help here as well,” Sevilgen said, explaining why they have spent every free minute to organize the classes.

They started raising funds and arranged with the Berlin youth support program Arche — “ark” in English — to take over the sponsorship for the classes. They got an offer from online search engine Ecosia to use the rent-free rooms in Berlin’s immigrant neighborhood of Wedding and quickly connected via Telegram with Ukrainian mothers who had recently arrived in Berlin.

More than 3 million Ukrainians have fled abroad, most of them to Poland. The majority are mothers and their children, with men of military age not allowed to leave Ukraine. Inside the country, over 6 million have been displaced, according to the United Nations.

Germany has registered 225,357 Ukrainian refugees as of Monday, although the real numbers are expected to be much higher, since they don’t need a visa to enter the country, and federal police only keep records of refugees arriving by train or bus. Those Ukrainians entering Germany from Poland by car usually are not registered.

Up to 10,000 refugees have been arriving by train daily in Berlin since the start of the war, and thousands more have come by car. Many are staying at shelters in the city’s convention center and at a former airport, while others are with relatives who immigrated years ago and belong to a 300,000-member Ukrainian diaspora.

The government estimates that about half of the refugees are children and teenagers who will need to attend schools and kindergartens. It has established a task force to coordinate their school attendance in Germany’s 16 states.

Several Berlin schools, including some private institutions, have already taken in a few refugees, and city officials are in the process of establishing up to 50 special welcome classes to bring them up to speed in language skills. The authorities can draw from their experience from 2015-16, when about 1 million people fled conflicts in Syria, Iraq and Afghanistan. Those children eventually entered the school system.

Until the welcome classes are up and running, the two classes organized by Sevilgen and Karlitski will help ease the children’s transition to their new lives, teach them German and enable them to make new friends.

“A new routine and other children — those are the most important things for them right now,” Sevilgen said. “And if we get more donations, we hope that we will be able to keep this project running as long as it takes to get the kids into the regular Berlin schools.”