Skip to content
Home News Ukraine war photojournalist: ‘My picture is terrible to look at but had to be taken’ 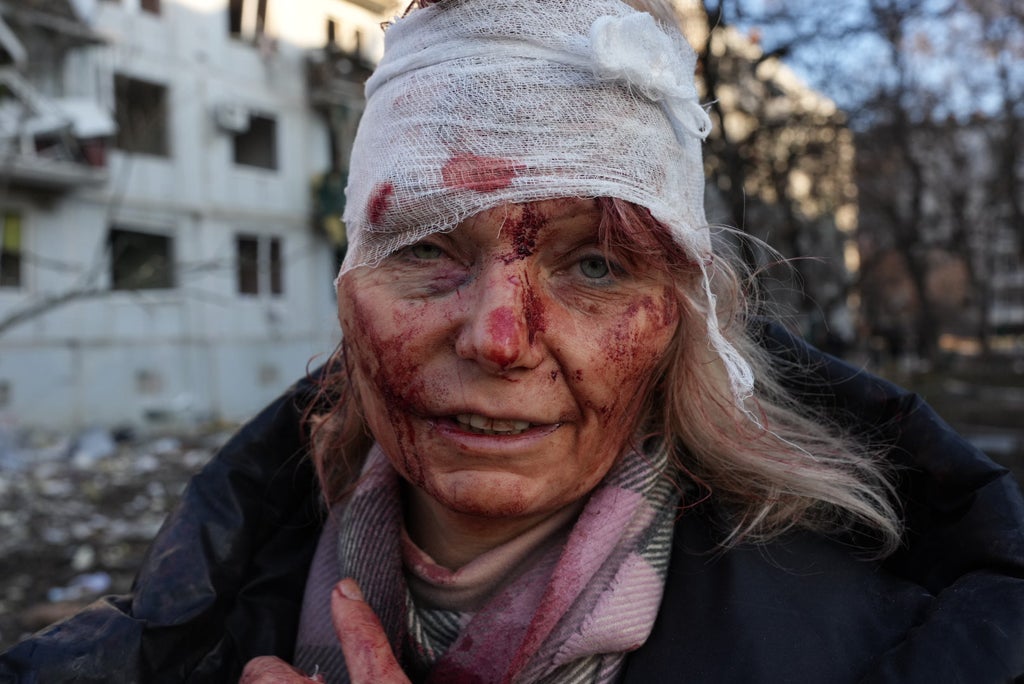 ORn the morning of Friday 25 February, Olena Kurilo’s pale green eyes stared out at the world. Ella’s 52-year-old teacher’s head was wrapped in a tattered bandage, her hair, nose, cheeks and lips encrusted in blood.

The haunting image, which was splashed across the front of newspapers around the globe, was taken on the day Vladimir Putin’s Russian army invaded Ukraine. Kurilo was injured in a Russian airstrike that hit the eastern Ukraine city of Chuhuiv, her home completely destroyed. She was the first person that photographer Wolfgang Schwan saw when he arrived on the scene.

“A missile had left a crater six meters wide,” says the 31-year-old Philadelphian, talking over video call from a rented flat in Kyiv. “We went over to it and that was when we saw Olena. She was walking with her arms out, very disoriented; I’m sure she was convicted. We photographed her while asking her name of her. One colleague was punching in on Google Translate, trying to talk to her.”

Schwan has since been in touch with Olena’s daughter, who told him her mother is now stable after having surgery. She is “laying low” after a huge Russian backlash, with claims spreading online that the photograph is fake and Kurilo an actor.

“Not only is she the face of the atrocities that happen in war to civilians,” says Schwan, “but now she has been thrown into the middle of a propaganda wave and is being hated for being a victim. I’m still processing it all.”

Schwan says he had “no idea” when he took the photograph that it would have such an impact. The first inkling that it was a huge deal came when he posted it on Instagram. Because of the sheer volume of likes and messages rolling in, he’s battery on his phone was plummeting.

See also  Who wants, can not: why obesity is preying on the poorest

The photo has defined the invasion, bringing to mind Nick Ut’s 1972 image of the naked girl running after a napalm attack in Vietnam or Jeff Widener’s 1989 photograph of the man standing in front of the tanks in Tiananmen Square. “I just hope it helps bring attention to the cost of war,” says Schwan. “Civilians are often the ones who suffer the most. This is what happens when someone invades another country. It’s terrible to look at but it has to be taken, because otherwise it’s just going to be photos of guys with guns.”

We speak the day before a Russian airstrike damages the Kyiv TV tower and kills five civilians. Schwan says the mood in the city is “understandably” one of “mild hysteria”. When he sets out each day, he is clad in a ballistic helmet and vest. He is medically trained for gunshot trauma.

Schwan arrived in Ukraine in January, after having monitored the escalating situation for months. He has a fixer – Sergii Solodko – showing him around and helping him communicate, who has become a “very, very good friend”. “In mid-February,” he says, “I was going to dinner here with new folks. If you didn’t watch the news you would have no idea there were 100,000 soldiers on the border. Ukrainians never brought it up in conversation, they were just tired of worrying about it for eight years. You’d seriously have no idea there was a war about to start here by the mood in Kyiv two weeks ago.”

This is Schwan’s first time documenting a war zone – last year, he photographed the siege at the Capitol and migrants seeking asylum at the US-Mexico border – and it is harrowing work. “I ran into one burning building with police officers, taking photos and looking in rooms to try to help people out,” he says. “It was a frantic, chaotic situation. There was a middle-aged woman on the fifth floor of the building, and both her eyes de ella – I’m not sure if they were there – she was bleeding out of both of them. I helped her down and used my med kit to give supplies to one of the emergency services guys.” Schwan will not hesitate to put his camera down and help people in need. “If someone is there who’s way more qualified than me to administer medical aid, obviously I’ll defer that to them, but I’m 100 per cent planning on stepping up to help rather than take photos of the situation.”

How is he coping? “I’m pretty good at pushing things to the back of my head as long as I’ve got work to do,” he says. “And when you have something terrible in front of you, and you have this little device you can put between you and what you’re seeing, that helps. I’ve got a job, I click away. When I get home I’m probably going to be crying in the shower about everything but, for now, as long as I stay busy, I’m good.”

“To keep my mom from having a heart attack,” he adds, “I’m calling her every day.”

Schwan plans to leave Kyiv when it “looks like the city is going to be encircled”. “We’ll head west,” he says. “I rented a car and I’m just going to drive the thing to Warsaw if I need to and leave it there. The car will be safer and I’ll be safer. If there’s any sort of legal issue I’ll figure that out later.” I laugh. “That’s less important than getting me out. Whenever it does happen I’m going to drive the two other photographers I’m with him and Sergii and his wife. We’re all leaving together.”