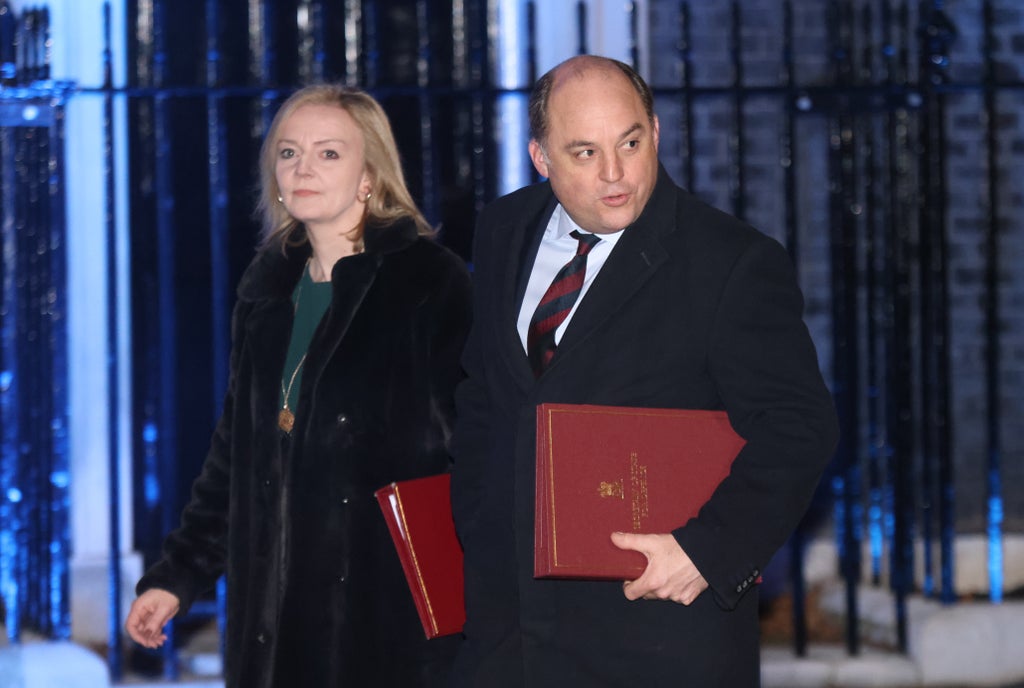 Britain’s defense secretary compared Vladimir Putin to Hitler as he questioned the Russian president’s mindset over his decision to invade Ukraine.

Ben Wallace said he expected Mr Putin to be “held to account” if he committed a war crime during the conflict, which entered day two on Friday.

“If president Putin commits a war crime, then, just as I do if I were to commit a war crime, I should expect to be held to account,” he told Sky News.

“I couldn’t tell you the difference between breaking international law insofar as directing your forces to invade another country, versus a war crime – eg. things like genocide, and indeed, you know, torture, etc.

“I wouldn’t want to speculate the differences. What I would say is he’s clearly broken international law, he’s occupying or trying to occupy a sovereign country who made one mistake in his eyes.

“Their mistake in their eyes was not to choose the Kremlin as a way for their future. And that’s all they have done.”

Mr Wallace’s comments came hours after Russian missiles rained down on targets in capital Kyiv, which came under attack in the morning.

Top Ukrainian military officials said Russian forces would enter areas just outside Kiev by the end of the day but units had already been defending positions on four fronts despite being outnumbered.

Russia’s defense ministry claimed that the radiation levels coming out of the power plant are normal but said it was sending paratroopers to secure the site.

Reports said at least 137 Ukrainians had been killed in the first 24 hours of the war, although that figure was expected to rise as the day progressed.

Volodymyr Zelensky, the Ukrainian president, has said he will not be forced out and believes special forces are already in the capital and will attempt to kidnap him to seize power.

In an early morning video message, I pleaded with western allies for help. “Who is ready to fight alongside us? I don’t see anyone,” he said.

Tens of thousands of Ukrainians are fleeing their homes – many of them west to Poland – with analysts warning that the conflict could create millions of refugees.

Many of those who have chosen to stay are holed up in bomb shelters and taking cover in the city’s metro system.

In a separate interview with the BBC, Mr Wallace said he believes Mr Putin won’t stop after invading Ukraine.

Defending previous comments in which he said there was a “whiff of Munich” about the Ukraine crisis, Mr Wallace suggested Russia’s full-scale invasion had proved him right.

“In Munich in 1938, Adolf Hitler all along had a plan to invade parts of Europe,” he said. “And all the diplomacy was about a straw man attempt by him to buy time.

“Putin has been set on this for many many months and certainly over a year. And I think that’s why – it doesn’t matter how much effort we made, and we all made unbelievable amounts of effort, we saw President Macron go, my Prime Minister regularly spoke to Putin – it didn’t matter.

In a separate interview, Mr Wallace said the decision not to “put British service personnel in direct fighting” was not about “risk”, but to avoid triggering a “war across Europe”.

“It’s about if we were to directly attack Russian aircraft, we would have a war across Europe.”

He added: “I have said continually for a long time, as has Britain, and the Prime Minister has supported this position, that Putin is not rational.