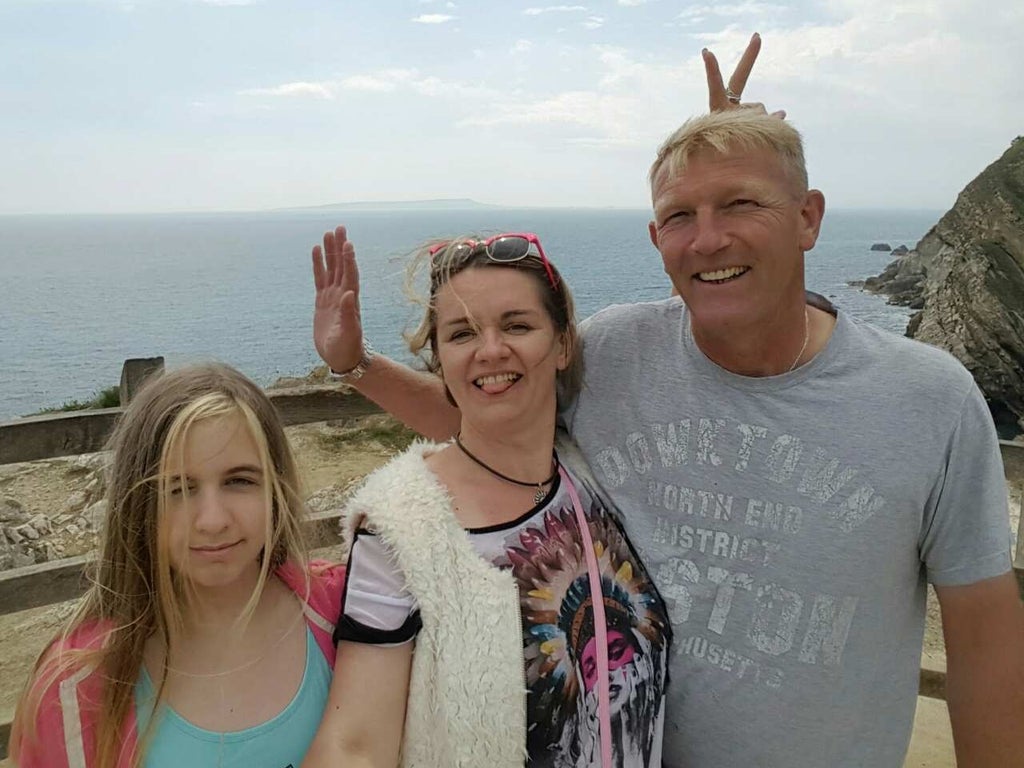 “Do you know where she slept last night? On the underground,” Jason Owen tells The Independent.

This is how his 16-year-old stepdaughter spent the first night of the Russian invasion of Ukraine.

Mr Owen lives hundreds of miles away with his Ukranian wife – Evelyn’s mother – in Southampton. And they desperately want the teenager to flee the warzone to join them.

So do her grandparents, both in their 80s, who were with the teenager in the Kyiv underground on Thursday night.

Mr Owen says: “They’re saying to my wife: ‘You need to get your daughter out. We cannot look after her from her’.

So far, this has not proved easy. The 54-year-old stepfather was hoping to make use of emergency measures for British nationals to get family members out of Ukraine, where the threat of a Russian attack had loomed for weeks before the all-out invasion on Thursday.

But the Owen family do not qualify, as this was for family members of Britons in Ukraine -rather than those living back in the UK.

“What they’re basically saying, if I was in Kyiv getting bombed, I can bring her. But because she’s been bombed on our own, I can’t,” Mr Owen says.

Now, his teenage stepdaughter is making her away across Ukraine – where Russia stepped up its offensive and moved into Kyiv on Friday – in the hope of making it to Poland.

“A child running from bombs,” he says.

It has been estimated the invasion could drive up to 5 million people to flee abroad, with reports that at least 100,000 people are already uprooted in the country where fuel, cash and medical supplies are running low.

As fears rose about a Russian invasion, the UK told British nationals in Ukraine to leave the country.

The UK government said it would also waive visa application fees for family members of its citizens who usually live in Ukraine.

Mr Owen says this waiver would have sped things up for his stepdaughter. But their rejection came through on Friday and the family was told to apply through the normal route – which he feared would take several months to sort out.

He says he cannot risk waiting that long to get his stepdaughter to safety.

“I don’t care what the government says. I’ll be driving to Poland to get my daughter,” Mr Owen says.

It was unclear what would happen after that – but he hoped she could come to the UK as a refugee fleeing a warzone. “Maybe what I’ll do is take her to France and put her in a dinghy. You just become desperate.”

He feels the emergency measures have only looked at one side of the equation: families of Britons living in Ukraine. “What about people who’ve got kids that are there?”

Others worry for their parents living in Ukraine, such as Natasha Kucherova from Cambridgeshire.

she told The Independenther Ukranian mother and father spent Thursday night in a bomb shelter in Kviv, where her mother had been for radiotherapy treatment. They are now trying to flee back to their hometown further west.

“It’s scary. No one imagined this type of war could happen in the 21st century. I am feeling terrible that I am unable to help my parents. I admire them for their bravery. I admire people of Ukraine,” she says.

Meanwhile Helen Ross Revutsky, who lives in London but has been in Ukraine for several months to care for her mother, says she feels stuck in Cherkassy, ​​in central Ukraine.

“I can’t find how I can leave this town. I have the information the roads are closed and there is no petrol at gas stations. And what should I do if I have an elderly mother with me who can hardly walk,” she tells The Independent.

She had to stay in Ukraine despite the government’s plea for British citizens to return to the UK because of her mother’s treatment.

“I’m worrying very much because Cherkassy is not too far from Kyiv,” she says.

Thousands of Ukrainians have crossed into neighboring countries to the west in search of safety. But it emerged on Thursday night the UK had not set up a route for Ukrainian refugees hoping to seek asylum in the country.

Ukraine says more than 100 people have been killed and hundreds more wounded since Russia launched its attack by land, air and sea on Thursday.