Skip to content
Home News Ukraine Take Shelter is giving hundreds of new homes to refugees. It was built by a 19-year-old Harvard student 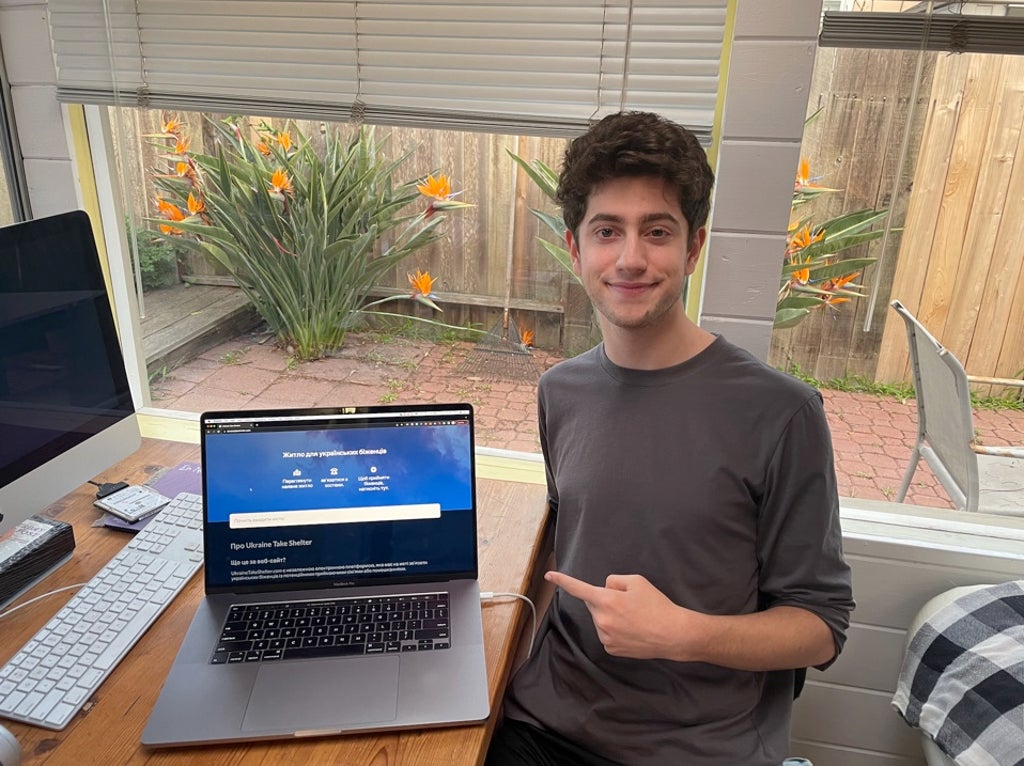 TO Harvard University student is matching Ukrainian refugees fleeing their homes in the war-torn nation with people offering spare rooms or a couch to sleep on in their homes all around the world.

Avi Schiffmann, a 19-year-old neurophilosophy student, told The Independent that he launched the website Ukraine Take Shelter to help the more than two million Ukrainians who have so far escaped from Russia’s attack as they desperately try to find temporary places to stay.

“I realized that the tools out there to help refugees find places to stay were really sub-par,” he said.

“Many of these refugees are escaping on foot amid explosions and shelling. They are stressed and confused and scared and they are in new countries where they don’t understand the language.

“And then they are just expected to go onto a government website that is full of jargon and nonsense and wait to be matched with somewhere to stay.”

In the two weeks since Russia declared war, people from countries across the world have rallyed in support of the Ukrainian people, donating items and sending funds.

Many have offered to take refugees into their homes but accounts on social media have revealed frustrations with their abilities to turn these offers into realities.

In the week since Ukraine Take Shelter launched, thousands of people from “almost every country on the planet” have now posted listings offering entire homes, annexes, rooms and even couches in their houses for Ukrainian refugees to stay.

As of Friday morning, there were 5,000 active listings on the website – not including an estimated 300 that hosts have taken down after their spaces have been filled, Mr Schiffmann said.

See also  My own Almudena | Opinion

“For example, there were dozens of places in Hungary last night but by this morning there was almost none left,” he said.

Many of the listings are in European countries close to Ukraine but offers have also come from hosts as far away as Israel, Canada and the US – as some refugees try to travel to countries where they have close ties.

“People are offering everything from a couch in their apartment for one person to an entire farm that can fit five families,” he said.

“If you have an extra couch in your home in a small village in Hungary, you can hop on the website and post a listing and then refugees can contact you.”

A quick search on the website on Friday morning revealed the likes of a long-term listing offering a three-bedroom home in downtown Ottawa for a family with children and a room for two people in Poland.

For people who don’t have space to take in fleeing refugees, Mr Schiffmann said there are other offers flooding in such as help with transportation or offers to take in refugees’ pets.

One listing from a host in Kraków, Poland, online on Friday said they were willing to pay for an Airbnb for a refugee.

Meanwhile, a host in Prague was offering temporary foster care for up to two cats including vet bills and pet food costs.

“It’s kind of a Craigslist for refugees,” said Mr Schiffmann.

“The thing about the site is that it puts the power back into the hands of refugees – they can see the listings and pick from them rather than waiting around to be matched by a nonprofit or a government.

“They already feel powerless – now they can use their own initiative and go to the site and find a listing for themselves.”

Since its launch, Mr Schiffmann said he has heard from both refugees and hosts who have connected through the website.

One heartwrenching message he shared with The Independent read: “Once again thank you for making that website, if it weren’t for your website. He was losing hope to return alive.”

He said: “A lot of people don’t want to leave Ukraine if they don’t know that they can get stable housing over the border.

“People are afraid for their lives but they are also afraid of what will happen if they don’t have any plans in place.”

The teenager said that he came up with the idea a few days into the war when he began thinking of ways he could help Ukrainians from where he lives in the US.

He said he attended a protest against Russia’s attack with a friend in San Diego and felt like it “wasn’t really helping”.

“I went with a friend to protest in solidarity with Ukraine in Balboa Park where people were holding up signs reading ‘Stop Putin’ and Ukrainian flags,” he said.

“And I thought that’s great for the few hundred people there in San Diego but I thought ‘it’s not really doing anything’.

“It’s just a bit of a show really that looks great on Instagram but isn’t really helping the people in Ukraine.”

The teenager decided that there had to be something more practical that he could do to help.

That night – 28 February – he started researching and noticed that there was a challenge that could easily be solved.

He sent a tweet to his 54,000 followers: “A cool idea would be to set up a website to match Ukrainian refugees to hosts in neighboring countries.”

He got into bed and noticed his tweet gaining more and more traction.

“I thought ‘yeh okay, I’m the perfect person to do it’. And so I jumped out of bed and got started,” he said.

He contacted his friend and Harvard University computer sciences student Marco Burstein and they spent the next three days working around the clock until the website went live.

“We didn’t sleep for three days, we just got it up as fast as possible,” he said.

The 19-year-old already had a large public platform after he hit headlines for launching a website during the pandemic that tracked Covid-19 cases.

So I have sought the help of this online community for expertise in the likes of cyber security and language translation.

“Anything I needed help with such as translations into Romanian I would tweet out and within moments, people reached out to help,” he said.

The result is a user-friendly website that is entirely created by volunteers and is currently accessible in 12 different languages ​​including Ukrainian, Russian and Polish.

People with space to welcome a refugee into their home can simply post a listing on the website.

A refugee then uses the simple search function to search for shelter in a specific area and the website shows them all the places nearby and what the hosts are offering.

Amid concerns for the safety of Ukrainian refugees as well as for hosts who are taking a stand against Russian aggression, it was important to make the website as secure as possible.

Neither the host nor the refugee share their exact locations on the site and refugees don’t even need to make an account.

Email addresses are not shared on the website as people often use their first name and last name so they can be more easily identified, Mr Schiffmann explained.

The student said that he was surprised that Western governments hadn’t already set up something like his website for the millions fleeing from Ukraine.

“Lots of governments are trying to do what they can but – like with the Covid website – I don’t understand how a 19-year-old with no design experience can be faster and create a more accessible website than the government of the most powerful country in the whole world,” he said.

“And not just governments but also NGOs and nonprofits.”

Mr Schiffmann said the site is now also being used by humanitarian aid groups on the ground with Ukrainian refugees and he is now working closely with some groups around improving the site further.