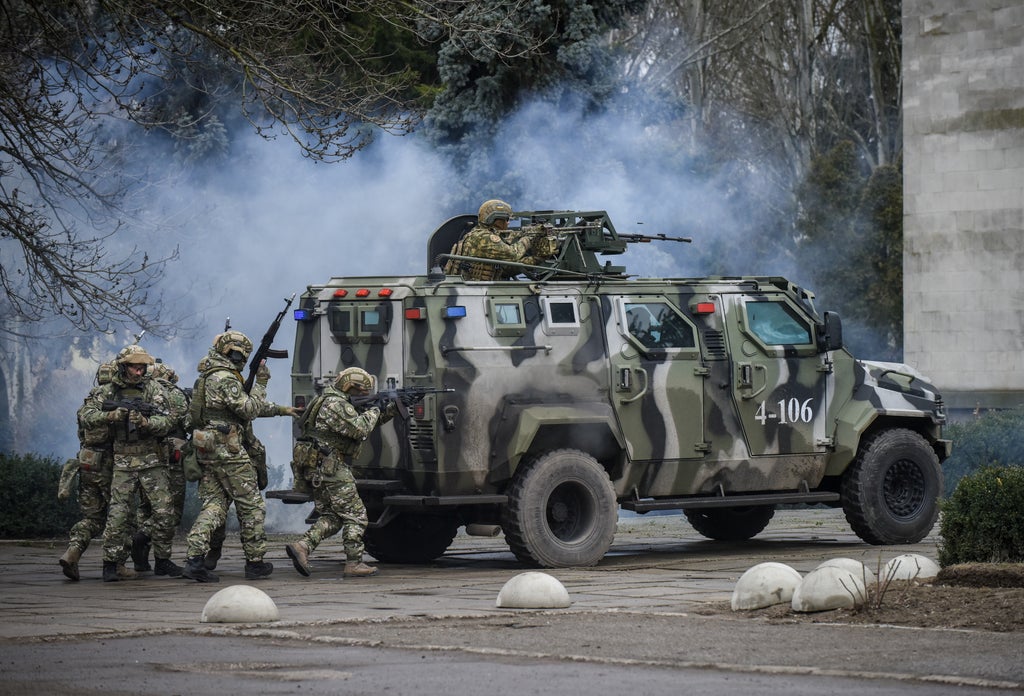 With UK nationals told to flee Ukraine, what is behind the tensions with Russia?

Vladimir Putin is planning multiple attacks on Ukraine’s borders as well as a capture of Kiev, according to Western officials.

At least 60 percent of Russia’s ground troops, half of its air force, and a significant proportion of its special forces will take part in an invasion on a massive scale, with a Kremlin-backed regime installed if successful in occupying the capital city, they claimed.

The US State Department has announced that it is relocating its embassy from Kiev to Lviv, in western Ukraine.

It comes as Boris Johnson and Joe Biden warned Russia faces a “protracted crisis” if Ukraine is invaded after a call between the two leaders on Monday night.

The Kremlin has said Russia’s security concerns would be significantly eased if Ukraine renounced its intention to join Nato – Mr Putin’s main demand in his current dispute with Ukraine and Western allies.

Ukrainian foreign minister Dmytro Kuleba said Ukraine’s bid to join Nato “remains unchanged” and that “it’s only up to Ukraine and thirty Nato allies to decide on the issue of membership.”

Vladimir Putin has been photographed several times giving a wide berth to people he holds individual in-person meetings with.

Earlier this month, he was pictured sitting at least four meters away from his French counterpart Emmanuel Macron after the latter reportedly refused to hand over his DNA via a Covid test.

Now, Mr Putin has been snapped sitting at another absurdly-long conference table for individual meetings with his own ministers over Russia’s escalating tensions with Ukraine and Nato allies.

Read here for the details:

Canada has pledged to offer a loan of about £300 million (500 million CAD) to support Ukraine in the face of a possible Russian invasion.

He told reporters: “The goal of this support from Canada and our other partners is to dissuade Russia from pursuing its aggression towards Ukraine.”

Russian invasion could begin at any time, White House says

A Russian invasion of Ukraine could begin at any time, including this week, the White House said on Monday as it reiterated that the path to diplomacy remains open to resolving the standoff.

Deputy press secretary Karine Jean-Pierre told reporters that the United States is “clear-eyed” about the situation on the ground with tens of thousands of Russian troops massed along the Ukraine border.

US embassy staff ‘destroy computers’ before move to Lviv

The US is relocating its remaining embassy staff in Ukraine from Kyiv to Lviv in western Ukraine.

This was announced by Secretary of State Antony Blinken today, who cited the “dramatic acceleration in the buildup of Russian forces” as the reason for the move.

The Wall Street Journal has reported that embassy staff were destroying computer equipment before leaving the building.

Russia plans ‘attacks on Ukraine border and capture of Kiev’

Vladimir Putin is planning multiple attacks on Ukraine’s borders as well as a capture of Kiev, according to Western officials.

At least 60 percent of Russia’s ground troops, half of its air force, and a significant proportion of its special forces will take part in an invasion on a massive scale, with a Kremlin-backed regime installed if successful in occupying the capital city, they claimed.

Full story here by Kim Senguptawho is reporting from Kiev:

PM Boris Johnson and US president Joe Biden have spoken this evening about the Ukraine-Russia crisis.

The pair agreed that there “remained a crucial window for diplomacy and for Russia to step back from its threats towards Ukraine,” a Downing Street spokesperson said.

The call followed discussions they each had with other world leaders, as Russia appears to be ramping up tensions with reported plans for “multiple attacks” on the Ukraine border, according to Western officials.

The spokesperson added: “The leaders emphasized that any further incursion into Ukraine would result in a protracted crisis for Russia, with far reaching damage for both Russia and the world.

“They agreed that western allies must remain united in the face of Russian threats, including imposing a significant package of sanctions should Russian aggression escalate.

“They also reiterated the need for European countries to reduce their dependence on Russian gas, a move which, more than any other, would strike at the heart of Russia’s strategic interests.

“The Prime Minister and President Biden agreed to remain in close contact as the situation evolves.”

US and EU discuss efforts to urge Russia to de-escalate

US and EU officials have discussed diplomatic efforts to urge Russia to de-escalate tensions with Ukraine, it has been reported.

The pair reiterated that further escalation by the Kremlin would be met with massive, coordinated consequences and severe costs for Russia, the State Department said in a statement.

Tobias Ellwood MP has warned that Western allies have taken “the wrong approach” in dealing with Russia’s aggression towards Ukraine.

I have added that Russian president Vladimir Putin is “smelling weakness” and is “exploiting it”.

In an interview with LBC radio, Mr Ellwood accused Western allies of “completely missing” the “bigger picture” and for lacking “a strategy”.

The chairman of the defense select committee also said that any sanctions imposed on the Kremlin are likely to result in “retaliatory sanctions” that would “play into [Mr Putin’s] own strategy”.

But the talks were tense and ended in an awkward press conference in which Mr Lavrov appeared to question her understanding of the Ukraine-Russia crisis.

Today, Ms Truss said “of course, the Russians didn’t like what I had to say” but she “nevertheless” had to deliver a message to Vladimir Putin’s government.