Skip to content
Home News Ukraine-Russia latest news: PM to call Putin as US warns invasion would be ‘horrific’ 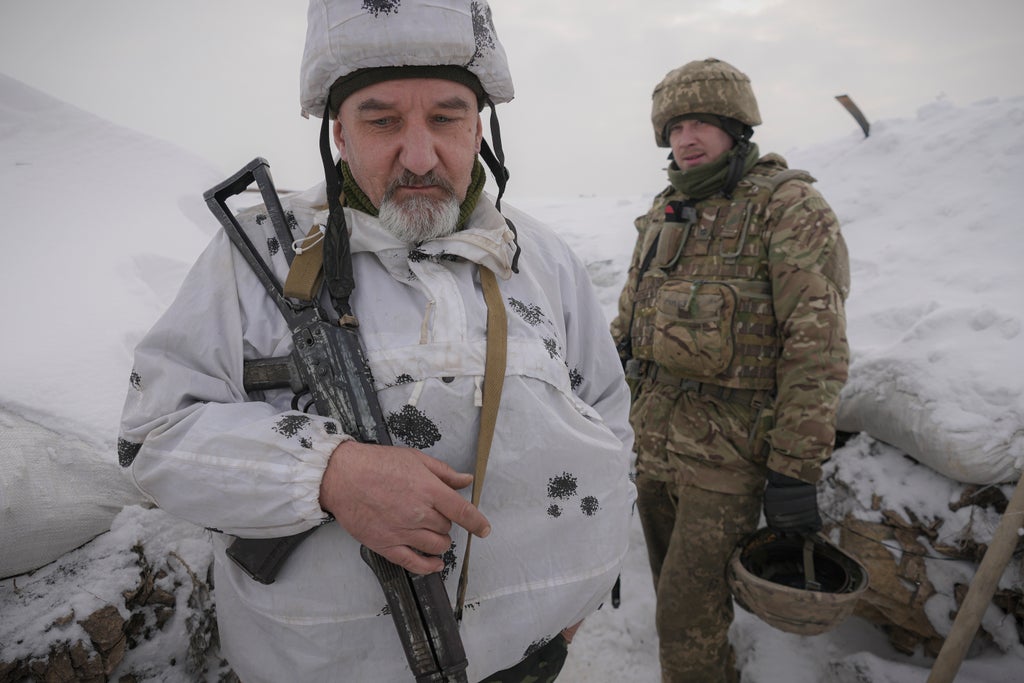 Boris Johnson will seek to “ramp up deterrence to avoid bloodshed” between Moscow and Ukraine with a visit to the region next week and a phone call to President Vladimir Putin, in which he will “reiterate the need for Russia to step back and engage diplomatically ”.

With US sources claiming Russia has amassed blood supplies – alongside more than 100,000 troops – near Ukraine’s border, top US general Mark Milley said Moscow’s deployment was larger than anything in scale and scope since the Cold War.

While Mr Milley warned a Russian invasion would have “horrific” consequences and would result in “a significant amount of casualties”, Ukraine’s president Volodymyr Zelensky has criticized the West’s “panic”, claiming it is destabilizing the economy.

Echoing his comments to Joe Biden, in which he questioned how “imminent” an attack might actually be, Mr Zelensky told foreign reporters: “I’m the president of Ukraine, I’m based here and I think I know the details deeper than any other president.”

Outcome of Russian invasion would be ‘horrific’, US warns

Russia’s deployment of troops is larger than anything in scale and scope since the Cold War, top US general Mark Milley has said.

The chairman of the Joint Chiefs of Staff warned that, if Russia invades, the outcome would be “horrific”, saying: “If that was unleashed on Ukraine, it would be significant, very significant, and it would result in a significant amount of casualties.”

But US defense secretary Lloyd Austin said: “Conflict is not inevitable. There is still time and space for diplomacy.”

Washington remains focused on countering Russian disinformation, including anything that could be used as a pretext for attacks on Ukraine, Mr Austin said, adding: “While we don’t believe that President Putin has made a final decision to use these forces against Ukraine, he clearly now has that capability.”

I have suggested there were “multiple options available to [Vladimir Putin] including the seizure of cities and significant territories, but also coercive acts and provocative political acts like the recognition of breakaway territories”.

Putin ‘not warming up Russian population to a war’, Tory MP suggests

Russia’s Vladimir Putin likely “wants to threaten in such a way that he gets what he wants without fighting”, an influential Tory MP has suggested, indicating that he believes a war in Ukraine is unlikely.

Tom Tugendhat, who chairs the Commons foreign affairs committee told The Times: “My own suspicion is he’s not warming up the Russian population to a war in Ukraine.

“I think he’s aware very clearly, having remembered the last time he did this in 2014, that protests of the mothers of dead soldiers can be pretty undermining at home.

“So I suspect he wants to threaten in such a way that he gets what he wants without fighting. Whether he’s prepared to actually fight, well I’m afraid only he knows that.”

Biden says he will move troops ‘in the near term’

US president Joe Biden said yesterday that he will be moving troops to Eastern European and Nato countries “in the near term” – but “not a lot”.

The Pentagon has placed about 8,500 US troops on stand-by for possible deployment to Europe, but no American forces have yet been deployed or moved around Europe, according to the Associated Press.

Earlier this week, Mr Biden said he might move troops in the nearer term, “just because it takes time”.

The Biden administration plans to spare everyday Russians from the brunt of US export controls if Russia invades Ukraine, and will focus on targeting industrial sectors, a White House official has said.

“We can’t preview every action, but the intent there really is to have measures that we think will degrade Russia’s industrial capabilities and industrial production capacity over time, not to go after individual, everyday Russian consumers,” national security official Peter Harrell told the Massachusetts Export Center.

Mr Harrell said the US was prepared, immediately after an invasion of Ukraine, to impose “crippling financial costs on major Russian financial institutions as well as to impose a range of quite sweeping export controls that will degrade Russian industrial capacity over the mid- and long end”.

Addressing the same trade event yesterday, US Commerce Department official Thea Kendler said: “We are contemplating massive sanctions targeting key people and industries that were not on the table in 2014” – the year that Russia invaded and annexed Crimea from Ukraine.

Liz Truss ‘to visit Russia within next two weeks’

Foreign Secretary Liz Truss has “agreed a date” to visit Moscow for talks within the next two weeks, her counterpart in Russia has claimed.

“We have already agreed on the date – it’ll happen in the next two weeks” Moscow foreign minister Sergei Lavrov said on Friday, according to Russian news agency Tass.

The foreign secretary’s visit would be the first to Russia since 2017, when Boris Johnson met with Mr Lavrov.

This weekend, Boris Johnson will consider a range of options to alleviate Russian aggression in the region, including fresh deployments and bolstering Nato’s defences, following a Ministry of Defense meeting.

The Foreign Office is also expected to announce tougher sanctions on Monday, meaning the UK can target Russia’s strategic and financial interests.

Hello, I’ll be picking up the blog this morning to give you live updates on the situation in Ukraine, as Downing Street announces that Boris Johnson will “ramp up deterrence to avoid bloodshed” between Russia and Kyiv.

The prime minister is determined to “accelerate diplomatic efforts” during a trip to the region in the coming days and plans to hold a phone call with Russian president Vladimir Putin.

A No 10 spokeswoman said: “The prime minister is determined to accelerate diplomatic efforts and ramp up deterrence to avoid bloodshed in Europe.

“He will reiterate the need for Russia to step back and engage diplomatically when he speaks to President Putin this week.”

Russia has range of military options, says US defense secretary

The US defense secretary said that Russia now has a complete range of military options after building up an estimated 100,000 troops on the Ukraine border.

At a Pentagon press conference on Friday, Lloyd Austin said: “While we don’t believe that President Putin has made a final decision to use these forces against Ukraine, he clearly now has the capability.

He said the troops could be used to seize Ukrainian cities and “significant territories” or to launch “coercive acts or provocative political acts” like the recognition of breakaway territories inside Ukraine.

He urged Putin to de-escalate tensions, and appeared to warn Moscow against what the White House recently said was Russia’s attempt to paint Ukraine as the aggressor using a “false-flag operation” to justify an attack.

He said: “We remain focused on Russian disinformation, including the potential creation of a pretext for further invasion or strikes on Donbas.

“This is straight out of the Russian playbook. They’re not fooling us.”

Earlier on Friday, the Kremlin said Mr Putin told French president Emmanuel Macron that the West had failed to consider Russia’s key conditions of halting further Nato expansion, stopping the deployment of alliance weapons near Russian borders, and rolling back its forces from Eastern Europe.

Washington said it had refused to compromise on Russia’s security demands in a letter to the Kremlin delivered on Wednesday.

What is Nord Stream 2 and how might the Ukraine crisis impact it?

Nord Stream 2 is a 745-mile pipeline stretching between Ust-Luga near western Russia’s border with Estonia and Greifswald in northeastern Germany, intended for the delivery of natural gas to central Europe via the Baltic Sea (Joe Somerland writes).

Construction on the project was completed in September 2021 at a cost of £8.3bn but it has yet to receive the necessary European regulatory approval to permit its operator, Russian state-owned gas giant Gazprom, to turn on the taps.

The original Nord Stream pipeline was completed in 2012 and runs parallel with its new companion and likewise terminates at Greifswald but has a different point of origin – Vyborg, on the northern coast of the Gulf of Finland.

Nord Stream 2 will enable Russia to pump an estimated additional 55 billion cubic meters of gas to Germany each year, doubling its present capacity and increasing its regional energy dominance.

Perhaps most significantly given the present diplomatic crisis – which has been seen over 100,000 Russian soldiers and armored vehicles assemble along the Ukrainian border, seemingly primed for invasion – the twin Nord Stream pipelines allow Russia to send gas west by means other than directly through its neighbour’s territory , which it previously relied upon and for which Kyiv received lucrative transit fees.

No signs yet that Russia de-escalating, says White House

The White House has said that it has not seen “tangible signs” that Russia is working to de-escalate the situation with Ukraine.

The Kremlin has said that it does not want a war. It said Vladimir Putin told French president Emmanuel Macron in a phone call today that he did not want the situation to intensify.

Karine Jean-Pierre, deputy White House press secretary, was asked at a press conference if Joe Biden would take Mr Putin at his word on that.

She said: “We have been very clear that we want diplomacy to work, because diplomacy is the only reasonable way to resolve this crisis that Russia has needlessly instigated by Russia’s military buildup on Ukraine’s border.

“We have also been consistent in saying that in order for diplomacy to work, it needs to take place in the context of de-escalation.

“So, we have not — you know, we have not seen tangible signs just yet that the Russians are in the process of de-escalation. That remains a decision for President Putin.”

She referred to the written response to Russia’s demands that the US delivered to the Kremlin on Wednesday, saying it contained “effective, constructive” ideas that addressed mutual concerns.

The letter said the US would not compromise to meet Russia’s demand that Ukraine be barred from joining Nato.

Vladimir Putin has not publicly responded to the letter but Sergei Lavrov, Russian foreign minister, said: “While they say they won’t change their positions, we won’t change ours.

“I don’t see any room for compromise here.”