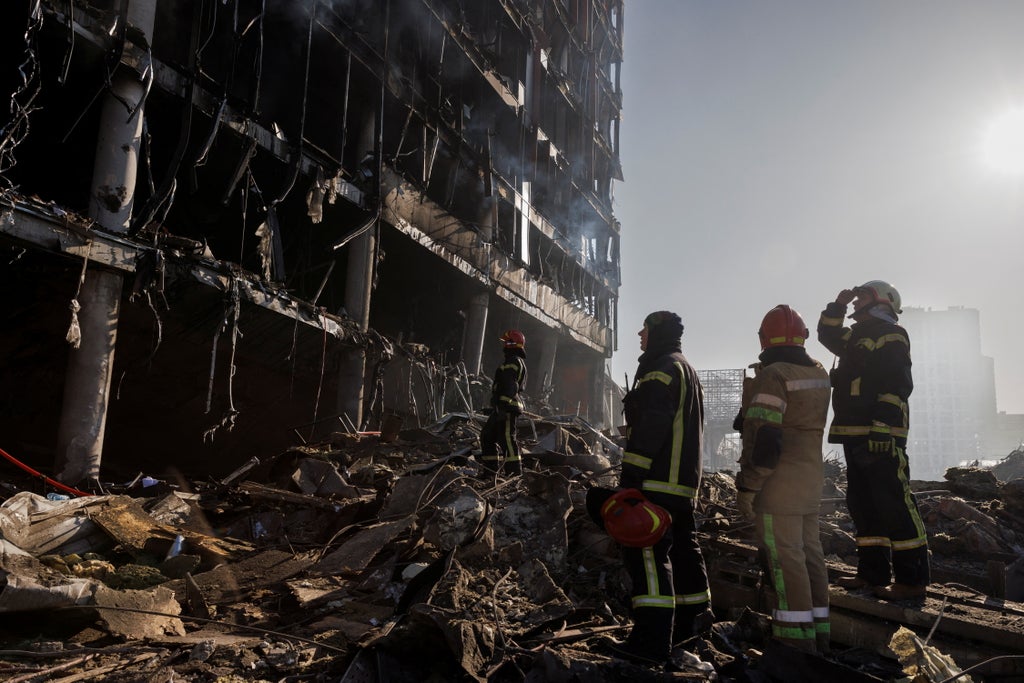 Russian president Vladimir Putin is contemplating the use of biological and chemical weapons in Ukraine, Joe Biden has said in response to Moscow’s claims that Kyiv has the lethal weapons.

“They are also suggesting that Ukraine has biological and chemical weapons in Ukraine. That’s a clear sign he’s considering using both of those,” Mr Biden said, adding that Mr Putin’s “back is against the wall”.

In a video address late on Monday, Ukrainian president Volodymyr Zelensky suggested Ukraine was willing to shelve any plans to join Nato.

He said he was prepared to discuss a commitment from Ukraine not to seek membership in exchange for a cease-fire, the withdrawal of Russian troops and a guarantee of Ukraine’s security.

“It’s a compromise for everyone: for the West, which doesn’t know what to do with us with regard to Nato, for Ukraine, which wants security guarantees, and for Russia, which doesn’t want further Nato expansion,” Mr Zelensky said.

Ukrainian President Volodymyr Zelensky has spoken to Pope Francis and that he would welcome the Holy See’s mediating role with Russia.

Pope Francis has implicitly criticized Russia and called the conflict in Ukraine an unjustified “senseless massacre”.

“Told His Holiness about the difficult humanitarian situation and the blocking of rescue corridors by Russian troops,” Mr Zelensky said in a tweet.

‘The mediating role of the Holy See in ending human suffering would be appreciated.”

North Korea last month blamed the Ukraine crisis on the “hegemonic policy” and “high-handedness” of the United States and the West.

The UN refugee agency says more than 3.5 million people have now fled Ukraine, in what is Europe’s worst refugee crisis since the Second World War.

UNHCR reported Tuesday that 3.53 million people have left Ukraine, with Poland taking in the lion’s share – more than 2.1 million – followed by Romania with more than 540,000 and Moldova with more than 367,000.

The International Organization for Migration estimates that nearly 6.5 million people are internally displaced within Ukraine, suggesting that some if not most of them might flee abroad if the war continues.

Russia says 78 of its aircraft have been seized abroad while almost 800 have been transferred to the Russian registry in order to keep them in the sky, the Ifax news agency reports.

Russia is facing a major problem with its commercial aircraft fleet as access to parts for the primarily Boeing and Airbus plans has been blocked.

Moscow has said it will be guided by Iran’s experience of resolving the situation with servicing aircraft, though it is unclear exactly how this will unfold.

Tehran, which has itself faced Western sanctions, has had to ground around half the national fleet and has struggled to procure parts, resorting to cannibalizing older aircraft in order to keep others flying,

Use of chemical weapons would ‘undoubtedly’ be a war crime, says UK minister

Any use of chemical or biological weapons by Russian forces in Ukraine would “undoubtedly” be a war crime, a UK minister has said.

US president Joe Biden has issued a fresh warning that Putin’s “back is against the wall” and that he may resort to using his chemical or biological arsenal.

Asked if their use would be a war crime, business minister Paul Scully told Sky News: “Undoubtedly. I think president Biden and the prime minister have been really resolute in making sure that we can take every action with the international community to address those crimes of Vladimir Putin.”

More handout satellite images made available by Maxar Technologies show damage and burning buildings in Irpin, near Kyiv, on Monday.

The area has seen intense fighting since almost the start of Russia’s invasion, nearly a month ago.

This satellite image shows Antonov airport and nearby Irpin.

Ukraine’s information agency has warned that seven wildfires allegedly caused by artillery fire or arson near the Chernobyl nuclear plant have been left “burning unchecked, raising worries that the radiation smoke could spread”.

The Center for Strategic Communications and Information Security tweeted that the fires are in areas now controlled by Russian forces.

Russia attempting to take Kyiv would be ‘suicide’

One of Russian’s main priorities is to take control of the Ukrainian capital Kyiv but trying to do so is “suicide”, Ukrainian presidential adviser Oleksiy Arestovych said in a televised interview on Tuesday.

He also said active hostilities between Ukraine and Russia could end within two to three weeks.

Boris Johnson is “desperate” to visit Ukraine to “experience what is happening there” during the devastating invasion by Russian forces, a minister has said.

Tory party chairman Oliver Dowden argued the risky visit would be important to enable the prime minister to “see what’s going on, on the ground”.

Reports have suggested that UK security officials are nervous about Mr Johnson’s apparent desire to visit Kyiv for talks with president Volodymyr Zelensky.