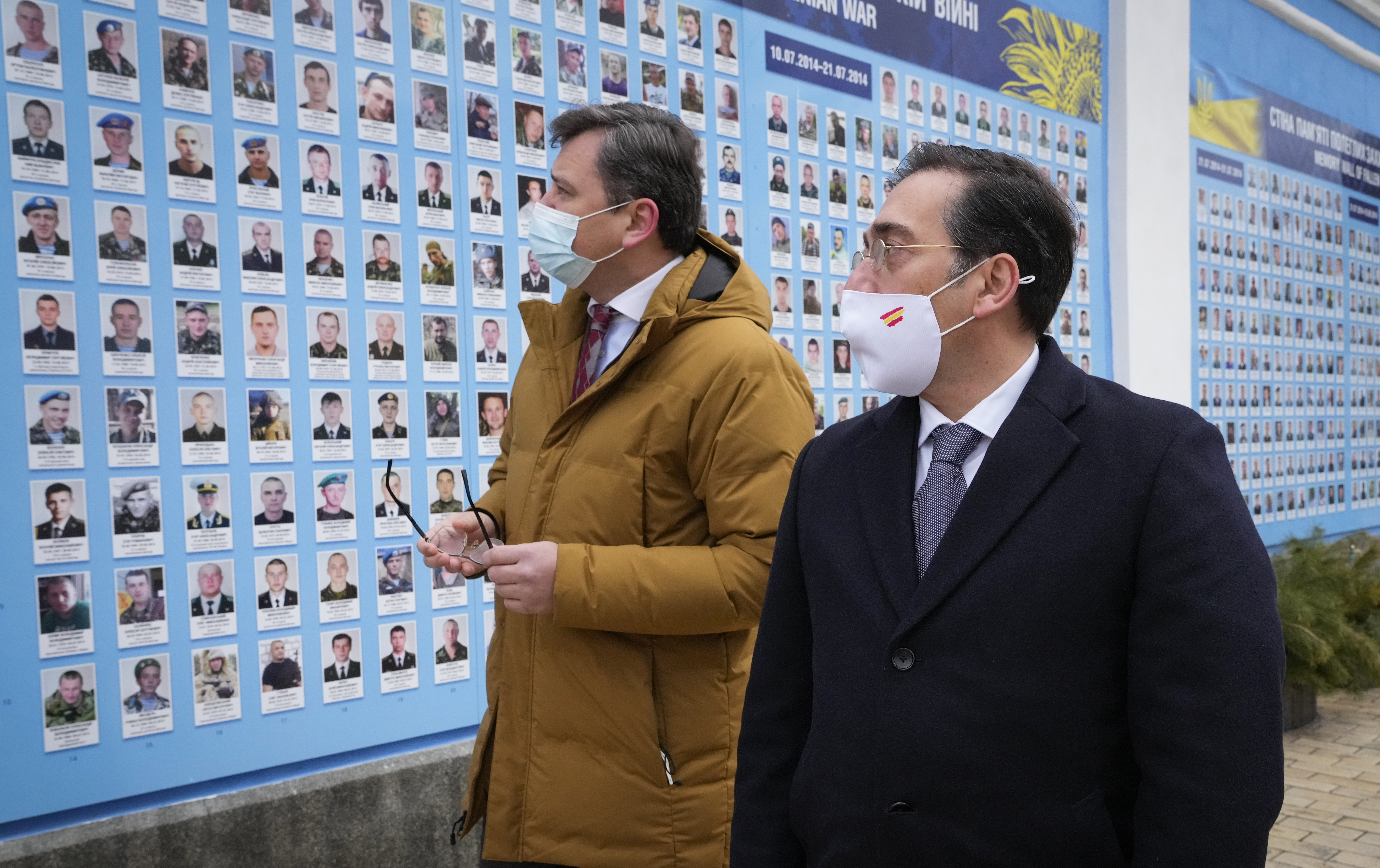 While its Western allies talk and negotiate to finalize a forceful package of sanctions against Russia, in the event of a new aggression against Ukraine, the Kiev government reproaches the European Union and the United States for not having imposed new reprisals against Moscow. Sanctions, the Ukrainian Foreign Minister, Dmytro Kuleba, has said, that they would not be preventive due to the current threat, but for having “violated international legislation” and contravened the spirit of the 2015 and 2014 Minsk peace agreements by applying measures to try to annex de facto the Ukrainian regions of Donetsk and Luganks (Donbas area), where the separatists who receive political and military support from the Kremlin have been fighting for almost eight years against the Kiev Army. “Certain measures could have been adopted earlier to demonstrate the determination to carry out severe actions,” Kuleba stressed this Wednesday at a press conference with his Spanish counterpart, José Manuel Albares, visiting the Ukrainian capital. . Albares has stated that Spain has no plans to send weapons to Ukraine.

With the background scenario of new concentrations of Russian troops along the borders with Ukraine, ships in the Black Sea and the starting signal, this Thursday, for the second phase of joint maneuvers by forces from Moscow and Minsk in Belarus, The Spanish Foreign Minister has insisted on the diplomatic path for de-escalation, which is still possible, he said. “All efforts must go to channel the detente through the path of dialogue so that Ukraine can live in peace with respect to its borders and guaranteeing its sovereignty”, declared Albares, who has insisted that his trip to Kiev, in The one who, in addition, has met with the president, Volodímir Zelenski, and with the prime minister, Denys Shmyhal, is part of this “high intensity” diplomatic activity in order to dissuade Russia.

Albares’s visit to Ukraine joins intense political-diplomatic activity around Kiev in recent weeks, with visits by various leaders and senior officials from the EU and NATO countries, who have tried to give visibility to the support for Ukraine in the face of the Russian threat. An intense agenda that Foreign Minister Kuleba has thanked and defined as one of the most important pillars against the escalation of the Kremlin. The Ukrainian government has also insisted this Wednesday again, in addition, that nothing indicates that the worst scenario, that of a new military aggression, is going to materialize for now. “No one on this side of Europe is preparing for a war,” Albares has also insisted. “And so we don’t have to give the impression that it’s an inevitable scenario because it’s not. And today the diplomatic route is being privileged, ”said the Spaniard.

Despite the fact that Russia insists on recognizing the United States as the only interlocutor in this security crisis in Europe, as the Kremlin demonstrated again on Tuesday after the meeting between French President Emmanuel Macron and Russian President Vladimir Putin, whom he ignored By saying that he does not contemplate agreements with him, but only with Washington, Albares has assured that there is unity around the partners and that issues that affect the old continent without the EU will not be discussed. That unity, the Spanish minister has said, is also a deterrent towards Russia.

For Kuleba, the package of sanctions that its Western allies are preparing to launch at the moment Russia begins a new military aggression is also already being an “effective deterrent measure.” However, Ukraine believes that the West could have done more and done it sooner, against measures such as the delivery of thousands of Russian passports to Ukrainian citizens of the Donetsk and Luhansks regions (about a million, according to official Russian estimates). Brussels and Washington have already imposed sanctions on Moscow for annexing the Ukrainian peninsula of Crimea in 2014 after a referendum deemed illegal by the international community.

According to Ukraine, the granting of citizenship to thousands of citizens of these Donbas regions, together with the decrees facilitating trade between these areas and Russia and other similar measures, violate the essence of the Minsk treaties, and shows how Russia is integrating these two territories in its political-economic and cultural space, while demanding in international forums that the agreements signed in the Ukrainian capital seven years ago by Moscow, Kiev and the separatist leaders under the mediation of France and Germany be fulfilled and under the aegis of the OSCE (Organization for Security and Cooperation in Europe), and that none of the parties transits at the moment.

Faced with the potential of the Russian Army, which is showing more openly these days in Belarus, where this Wednesday, in addition, senior officials from the Russian Army have arrived, Kiev continues to ask its Western allies to provide aid in the form of defense material, which has already received from the United States or the United Kingdom, for example. Spain, Albares said this Wednesday, does not plan to send weapons to Kiev. “We believe that this is the time for diplomacy, not to open scenarios and hypotheses that are not there,” said the Spanish foreign minister.

Kuleba, meanwhile, has insisted that the alert for the Russian escalation does not concern only Kiev. “It is important to note that [esta crisis] It is not just a threat to Ukraine, but to the whole of Europe”, he stressed. “Without a doubt, Russia is trying to take revenge for having lost the USSR and the Cold War, so this is about defending Europe’s security architecture. The future of Europe and all European countries depends on how the entire European community overcomes this crisis”, added the Ukrainian minister.