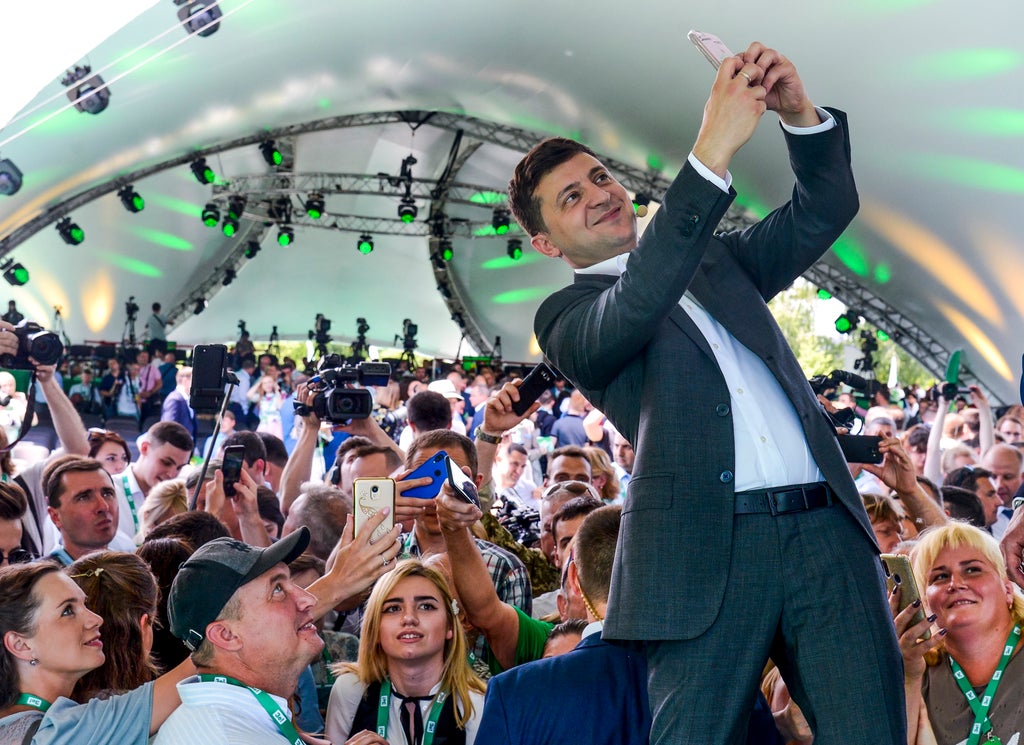 As a political novice making an unlikely run to be Ukraine’s president, Volodymyr Zelenskyy vowed to reach out to Russia-backed rebels in the east who were fighting Ukrainian forces and made strides toward resolving the conflict. The assurances contributed to his landslide victory in 2019.

But after 2½ years in office, Zelenskyy is watching his once-enormous support dissolve as Ukraine stands on what many fear is the verge of a Russian invasion that would not only take the rebel regions but possibly the rest of the country.

To make matters worse, the incumbent whom Zelenskyy defeated in 2019 has boldly returned to the country to face charges of treason and stir up opposition to him. Analysts, meanwhile, suggest that Moscow is seeking to bolster support among pro-Russia politicians in Ukraine and that the buildup of Russian forces near Ukraine’s border is partly aimed at destabilizing the country’s politics.

Britain’s intelligence services claimed last month that Russia was seeking to overthrow Zelenskyy’s government and replace him with the leader of a small party that opposes Ukraine’s ambitions to join NATO and the European Union.

Zelenskyy tried to calm the political turbulence Sunday by downplaying the stepped-up warnings from the US about the imminent possibility of a Russian invasion.

“We understand all the risks,” Zelenskyy said, adding that if anyone has any “information regarding a 100% certain invasion, beginning on the 16th,” they need to come forward.

The maneuverings and the dismay among ordinary Ukrainians present a significant challenge for a country where democracy has been shambolic for decades. In the past 20 years, Ukraine has endured two significant uprisings — one that forced the rerun of a fraud-ridden presidential election and the mass, bloody protests that drove the Kremlin-friendly president to flee the country in 2014. Fistfights have broken out in Parliament. Political alliances often shift and parties transmute into new entities.

But Ukrainians have little confidence that Zelenskyy can ensure that stability. According to a January poll by the Kyiv International Institute of Sociology, only 30% of the country’s people want Zelenskyy to run for a second term and even fewer — 23% — would vote for him.

The continuing conflict in the rebel east and the prospect of a full-scale war aren’t the only factors in his declining support.

“Zelenskyy promised to end the war and defeat corruption, but this did not happen,” said Anatoly Rudenko, a 48-year-old driver in Kyiv. “Prices are rising, corruption has not gone away and we have begun to live even poorer.”

“The miracle did not happen. The situation is only getting worse,” said Tatyana Shmeleva, a 54-year-old economist.

Zelenskyy initially made his name in Ukraine as a comic actor portraying on television a teacher who inadvertently becomes president after railing against corruption. In one analyst’s view, he erred as president by taking a similar path.

“Zelenskyy made a mistake by starting a confrontation with all the oligarchs of Ukraine at once, who control the main political forces, parties, TV channels. This is a very dangerous, very risky game,” said Vladimir Fesenko, head of the Penta analytical center.

Among the oligarchs Fesenko mentioned are Petro Poroshenko, the confectionary tycoon who preceded Zelenskyy as president and now faces treason charges for allegedly facilitating coal sales that financed the eastern rebels; industrialist Rinat Akhmetov, from Ukraine’s east who controls an opposition faction; and Viktor Medvedchuk, the country’s most prominent pro-Russia politician, whose three TV stations have been blocked for allegedly spreading misinformation and who is close to Russian President Vladimir Putin the godfather of one of his daughters.

These oligarchs are not unified — Medvedchuk and Akhmetov are affiliated with rival opposition factions, while Poroshenko’s presidency was marked by strong antipathy toward Russia. But many observers believe Moscow is trying to exploit any opposition to Zelenskyy.

“There are no open pro-Russia forces that are able to legally come to power in elections, which means that the Kremlin must look for hidden allies and conduct secret negotiations with several Ukrainian players at once,” Fesenko said. Russia “is pulling economic, energy, political strings, trying to find ‘flexible’ political forces.”

“What does Putin want? His task is very simple — it is the destabilization of our state. Can he do it militarily? No, I cannot. To do this, he needs internal destabilization,” Ukrainian Security Council head Oleksiy Danilov said.

However, analyst Volodymyr Sidenko of the Razumkov Center said “the scenario of collusion between one of the Ukrainian oligarchs and the Kremlin looks unlikely, since there are no conditions for the formation of stable Russian-Ukrainian business chains.”

Ukraine’s next parliamentary election will be held in 2023 and all opinion polls show that the ruling pro-presidential Servant of the People party may lose control of parliament. This would complicate Zelenskyy’s ambitions for another term in 2024, so the political landscape could change drastically.

But the current tensions may even work in his favor in the long term.

“Threats from Russia can paradoxically help Zelenskyy — he is just trying to unite everyone who stands for an independent and European Ukraine,” said Grigory Khoronenko, a programmer in Kyiv. “There may not be a war but Zelenskyy has already received military and financial assistance from the West, which will go to support morale.”

The British intelligence report that claimed Russia could seek to install politician Yevheniy Murayev as Ukraine’s president gave no scenario about how that plan might work. Murayev once was part of Medvedchuk’s opposition party, but split and formed a party of his own that has no seats in parliament.

The UK report sparked wide speculation about Russia’s possible nefarious intent, but many Ukrainians brushed it off as far-fetched.

“I perceive the British version about Murayev with skepticism; this may be something Russia deliberately threw in… to create a fake smokescreen and hide the real players that the Kremlin is oriented toward,” Fesenko said.

Jim Heintz in Moscow contributed to this story.

Follow all AP stories on tensions over Ukraine at https://apnews.com/hub/russia-ukraine