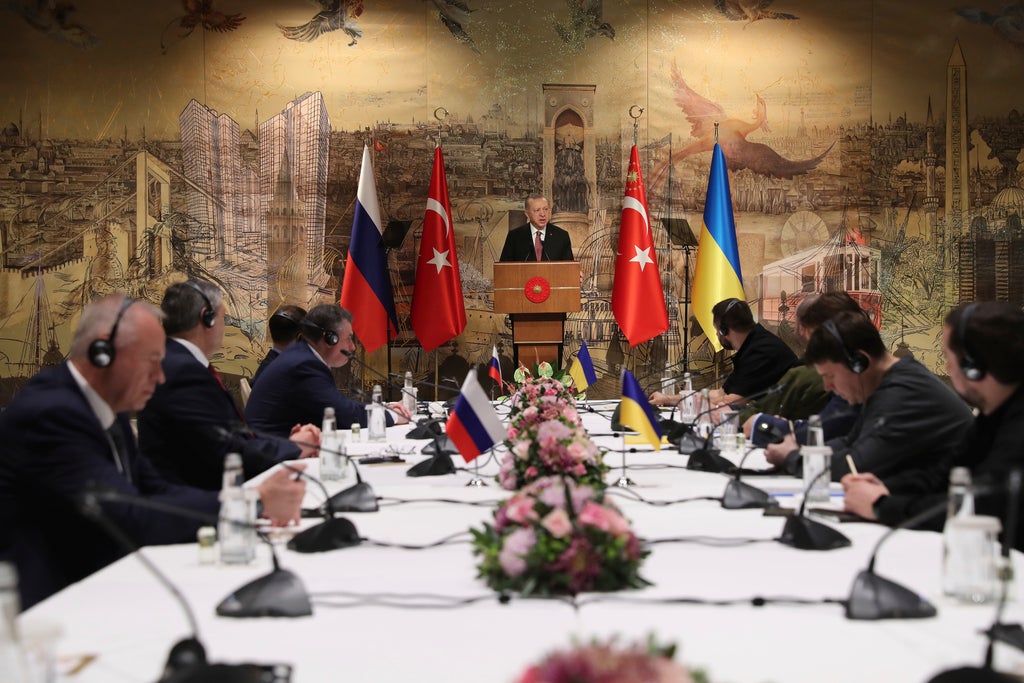 Ukraine’s foreign minister has warned peace negotiators not to eat or drink while participating in talks with Russian counterparts today.

The warning comes after it was revealed by sources that Chelsea FC owner Roman Abramovich and Ukraine peace negotiators suffered symptoms of poisoning including red eyes, constant and painful tearing and peeling skin on their hands and faces during meetings at the beginning of March.

The Independent understands that the Chelsea FC owner suffered temporary blindness for several hours following the poisoning, but quickly recovered.

“I advise anyone going for negotiations with the Russian federation not to eat or drink anything and preferably, to avoid touching any surface,” foreign minister Dmytro Kuleba said in an interview on national television.

Ukrainian negotiator Mykhailo Podolyak took a similar line saying “there is a lot of speculation, various conspiracy theories,” while Rustem Umerov, another member of the negotiating team, urged people not to trust “unverified information”.

Mr Abramovich accepted a request by Ukraine at the end of February to help negotiate an end to Vladimir Putin’s invasion just days after it started, and is said to still be interested in mediating despite the incident.

An adviser to Ukraine’s president Volodymyr Zelensky has confirmed that Mr Abramovich was involved in talks with Russia.

Cambridge University professor Alexander Rodnyansky told Times Radio: “He has been playing a role, he’s certainly been talking to the Russian leader. And that’s where the value is potentially.”

A government minister called the alleged poisoning of Mr Abramovich and Ukrainian negotiators a “worrying development.”

Tory MP Will Quince told Sky News the UK would be looking to “establish the facts” around the claims.

Asked if that was advice Britain would echo, Mr Quince said: “As much as there is skepticism globally about whether these peace talks will be successful, I desperately hope that they are.”

Mr Kuleba said of the talks in Turkey: “We are not trading people, land or sovereignty.”

“The minimum program will be humanitarian questions, and the maximum program is reaching an agreement on a ceasefire,” he said on national television.

A spokesperson for the foreign office said: “The allegations are very concerning. The UK will continue to assist by implementing tough sanctions on Putin’s regime, and by providing defensive and humanitarian support to help put Ukraine in the strongest possible negotiating position.”