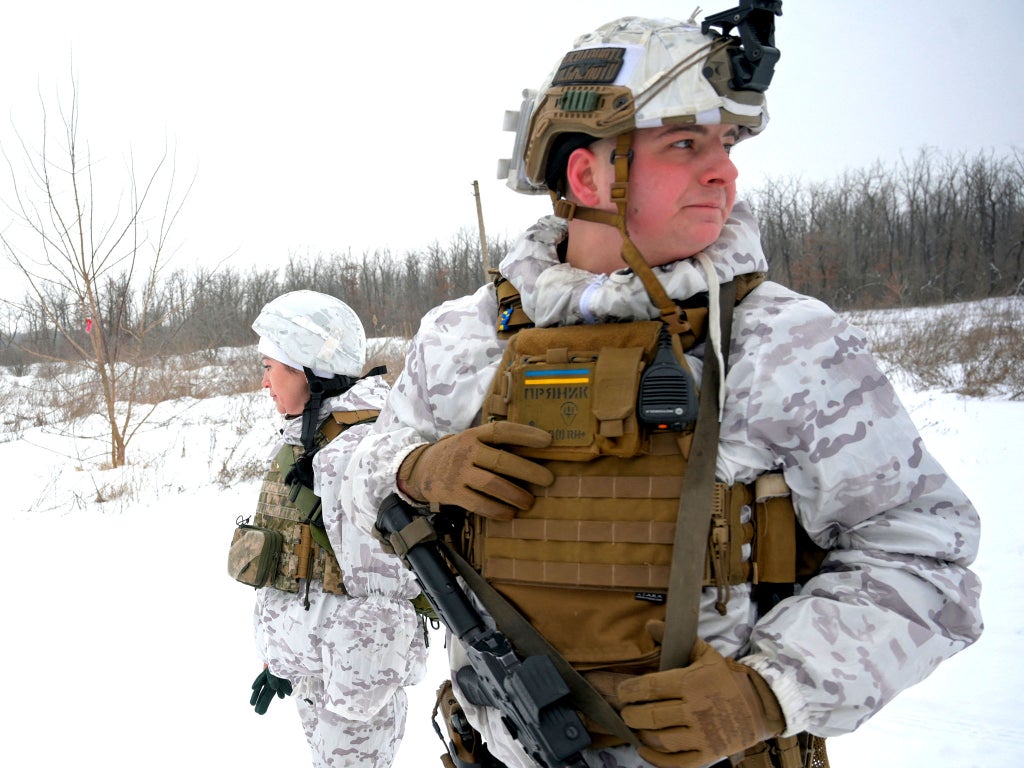 Joe Biden has said there would be “enormous consequences” globally if Russia invaded Ukraine.

It is estimated that some 100,000 Russian troops are massing on the border with Ukraine. Biden said that if Vladimir Putin ordered them to move “it would be the biggest invasion since World War II, it would change the world.”

sources said the independent that the United States was preparing economic sanctions with the aim of “maximizing the pain in the Kremlin” if Russia invades.

The plans, which were being discussed with partners and allies, could include export controls and financial sanctions, the sources said.

They will be designed to “maximize pain in the Kremlin while minimizing spillover” elsewhere, the source said.

In the UK, Boris Johnson said he “would not hesitate” to tighten economic sanctions against Russia in the event of an invasion.

Joe Biden will discuss global energy security with Qatar’s leader next week, the White House said amid concerns Russia could cut off gas supplies to Europe.

Sheikh Tamim bin Hamad al-Thani will meet with the president at the White House as the United States begins talks with states and energy companies about a possible diversion of supplies to Europe if Russia invades Ukraine.

Antony Blinken, the US secretary of state, discussed the matter with the foreign minister of Qatar, one of the main producers of liquefied natural gas, in a phone call on Monday, according to a source familiar with the matter who requested the anonymity.

Tamim’s meeting with Biden at the White House will provide the leaders with an opportunity to discuss “ensuring stability in global energy supplies,” White House press secretary Jen Psaki said in a statement.

Washington is concerned that Russia, which has massed more than 100,000 troops on Ukraine’s borders, could invade its neighbor, triggering US and European sanctions that would prompt the Kremlin to halt Russian gas deliveries to Europe.

UK and US discuss Russia’s ban on global payment platform

Boris Johnson said he was discussing Russia’s ban on the Swift global payments system with the United States.

Asked about the Swift payment system and whether Britain would ban Russia, Johnson said: “There’s no doubt it would be a very powerful weapon.”

“However, I am afraid that it can only be really implemented with the help of the United States. We are in talks about that.”

The United States is preparing a broad tranche of economic sanctions to “maximize the pain in the Kremlin” if Russia invades Ukraine. the independent has been told by a US government source.

“If there is an attack, there will be retaliation and the price [for Russia] it will be very high,” Macron said. He added that the recent talks were “a God thing” but that they still did not show clear results.

His comments came on another day of heated diplomatic discussions with British Prime Minister Boris Johnson, who also warned against any military action by Russia, saying it would be “tragic and futile”.

He told the House of Commons: “If Russia goes this way, many children of Russian mothers will not come home.”

Ukraine situation “has not de-escalated” yet, US State Department says

The situation with Russian troops on the border with Ukraine is considered not to be moving in the right direction, the US State Department said.

Ned Price, the US State Department spokesman, told a news conference: “I don’t think we’ve seen any concrete evidence of de-escalation yet.”

“We have not seen the necessary de-escalation for diplomacy and dialogue to be successful.

Joe Biden has said there would be “enormous consequences” globally if Russia invaded Ukraine.

Russia is believed to have amassed more than 100,000 troops on its neighbor’s border and there are fears it is planning an invasion. Western leaders are anticipating Russia’s next move.

Speaking to reporters about the US approach to the situation on a visit to a DC gift shop, Biden said: “There would be huge consequences if he went in and invaded, however he could, the whole country… Russia, not just in terms of economic and political consequences, but also of enormous consequences throughout the world.”

“If it moved in with all those forces, it would be the biggest invasion since World War II. It would change the world.”

13:00: Boris Johnson warns that Putin’s invasion of Ukraine would be “tragic and useless” [post]

17:00: French President Macron will call Putin on Friday to “clarify” the situation in Ukraine [post]

18:00: Ukraine’s president urges the public not to panic [post]

19:00: The United States prepares sanctions to ‘maximize the pain’ for Russia if it invades Ukraine [post]

An escalation of the conflict between Russia and Ukraine would likely drive up energy prices for many countries, keeping inflation rates high, a senior International Monetary Fund (IMF) official said.

“This time … if this conflict were to happen, you would see a rise in energy prices,” Gopinath told Reuters, noting that the current crisis was playing out in winter and that natural gas reserves were much lower in Europe.

Prices of other commodities exported by Russia were also rising and could trigger a “larger and more widespread increase” in commodity prices if the conflict escalated, he told Reuters after the release of the IMF’s Updated World Economic Outlook. .

Russia’s economy shrank by 3.7% in 2015 due to falling oil prices and international sanctions imposed after the annexation of Crimea.

The IMF currently estimates that Russia’s economy will grow 2.8 percent in 2022, but that forecast does not include concerns about the conflict, Gopinath said.

Mitch McConnell, the Republican leader in the US Senate, is a frequent critic of Joe Biden.

However, he said Tuesday that the US president’s administration is “moving in the right direction” in its response to the crisis in Ukraine.

Last week, McConnell said Biden had “wired passivity and weakness” to the Kremlin, which has amassed more than 100,000 troops on the Ukrainian border.

But this view seems to have changed. “What I’ve been hearing since then is encouraging, that they’re prepared to take action before a raid, not after,” he said in Kentucky.

The United States has delivered more military equipment to Ukraine amid the threat of a Russian incursion.

“Javelins in Kiev! A new shipment of security aid – launchers and missiles – with a total weight of about 80 tons. We look forward to the arrival of the fourth of the great flock of birds soon,” he tweeted.