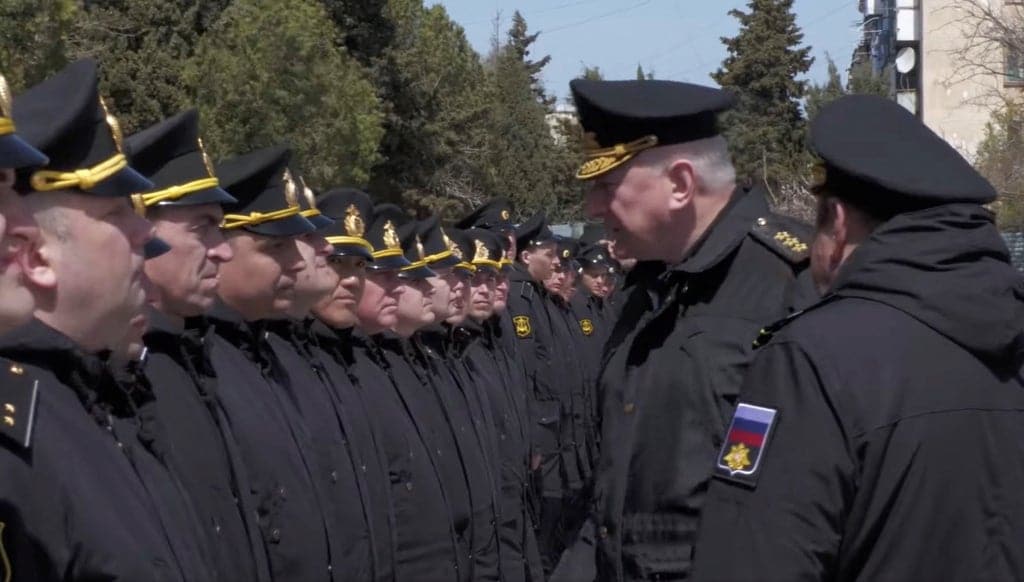 Russia admitted to destroying an ammunition factory in the Kyiv province of Ukraine in an overnight missile attack.

Earlier, we reported that a missile attack in the early hours of the morning damaged infrastructure near the Ukrainian capital, but there were no details at that time. Since then, no information has been released about the extent of the destruction and potential casualties.

Meanwhile, Russia has released the first images of the surviving sailors from its sunken Black Sea flagship, the Moskva.

The pictures were released as the crew members met with the head of the Russian navy in Crimea.

The Moskva sunk on Thursday after sustaining heavy damage. Ukraine claims its forces hit the vessel with missiles, while Russia claimed a fire had detonated ammunition on board before the ship sunk during a storm.

Russia has lost an eighth military general in Vladimir Putin’s invasion of Ukraine.

Alexander Beglov, governor of St Petersburg, confirmed the death in a statement that said Frolov fought in the Donbas region of eastern Ukraine.

Read all the details here by aisha rimi

Pope Francis pleaded for peace in Ukraine during his Easter mass speech, asking world leader to “stop flexing muscles” while people are suffering.

He also said Ukraine was dragged into a “cruel and senseless war” and described the horrors children and refugees had to suffer.

Finland and Sweden, which are both considering joining the Western military alliance, conducted combined Nato military drills in March.

“The recent increase in Nato’s activity in the Arctic is a cause for concern. Another large-scale military exercise of the alliance was recently held in northern Norway. In our view, this does not contribute to the security of the region” Korchunov said.

On Thursday, one of Vladimir Putin’s closest allies warned Nato that if Sweden and Finland joined the alliance then Russia would deploy nuclear weapons and hypersonic missiles in a European exclave.

Survivors of the Russian warship Moskva that sunk earlier this week allegedly appear in a video published today by the Russia’s defense ministry.

The released image purports to show crew members meeting the head of the Russian navy in Crimea.

The Moskva sunk on Thursday after sustaining heavy damage. Ukraine claims its forces hit the vessel with missiles, while Russia claimed a fire had detonated ammunition on board before the ship sunk during a storm.

No evacuations today as Ukraine and Russia ‘cannot agree on ceasefires’

Ukraine and Russia have failed to strike a ceasefire agreement to allow humanitarian convoys to evacuate civilians from war-affected areas today.

Iryna Vereshchuk, the deputy PM of Ukraine, said: “We have not been able to agree … about ceasefires on evacuation routes. That is why, unfortunately, we are not opening humanitarian corridors today.”

Ukrainian authorities have asked for humanitarian corridors for the evacuation of civilians and wounded Ukrainian troops from the besieged port city of Mariupol, she said.

He said: “Overnight, high-precision air-launched missiles destroyed an ammunition factory near the town of Brovary in Kyiv region.”

No information about the extent of the damage or any number of casualties has been given yet.

The Prince of Wales has dedicated his Easter message to the millions of refugees who are “wounded by the past, fearful of the future”.

Prince Charles’ words come as thousands of Ukrainians continue to seek sanctuary from fighting in their homeland, following in the footsteps of millions of refugees who have already fled the Russian invasion.

He said meeting the “innocent victims of conflict” over the years, he had found it “profoundly moving” to see the numbers of people ready to invite those in need into their homes.

More than 200,000 people in the UK have registered an interest in opening their homes to Ukrainian refugees under the government’s Homes for Ukraine sponsorship scheme.

No sign of Ukraine surrender in Mariupol six hours after deadline

It’s now six hours since Russia gave holdout Ukrainian soldiers an ultimatum to lay down arms in the pulverized southeastern port of Mariupol.

But several hours after the 3am GMT deadline there was no sign of compliance by Ukrainian fighters holed up in the vast Azovstal steelworks overlooking the Sea of ​​Azov.

Having failed to overcome Ukrainian resistance in the north since President Vladimir Putin’s February 24 invasion, the Russian military has refocused on the eastern Donbas region where Mariupol is the main port.

The Russian Defense Ministry said its troops had cleared the urban area of ​​Mariupol, which has seen some of the fiercest fighting and worst civilian suffering with bodies littering streets and thousands hunkered down in atrocious underground conditions.

The steelworks, one of Europe’s biggest metallurgical plants with a maze of rail tracks and blast furnaces, have become a last stand for the outnumbered defenders.

“The Russian Armed Forces offer the militants of nationalist battalions and foreign mercenaries from 06:00 (Moscow time) on April 17, 2022, to stop any hostilities and lay down their arms,” the defense ministry said in a statement.

“All who lay down their arms are guaranteed that their lives will be spared,” it said, offering the defending “remnants” a four-hour window to leave the plant without arms or ammunition.

There was no immediate response from Kyiv to the ultimatum, though Ukraine’s military said Russian air strikes on Mariupol continued along with assault operations near the port.

Ukrainian President Volodymyr Zelenskiy accused Russia on Saturday of “deliberately trying to destroy everyone” in Mariupol and said his government was in touch with the defenders. But he did not address Moscow’s claim that Ukrainian forces were no longer in urban districts.

He said killing his troops would put paid to peace efforts.

One prisoner recalls how a man was beaten to death next to him. Another recounts being stripped, stabbed and subjected to electric shocks.

Austria’s chancellor Karl Nehammer — the only EU leader to meet Vladimir Putin since the invasion of Ukraine — has said that the Russian president believes that he is winning the war.

In an interview, Mr Nehammer said that the conversation with the Russian president in Moscow last week was not friendly, describing it as “frank and tough”.

Moscow, Mr Nehammer said that he made it clear to the president that “his attitude, his view is not shared by anybody”.

The Austrian chancellor said that Mr Putin sees it as a “kind of self-defence operation of the Russian Federation. He calls it special military operations. I call it the war.”