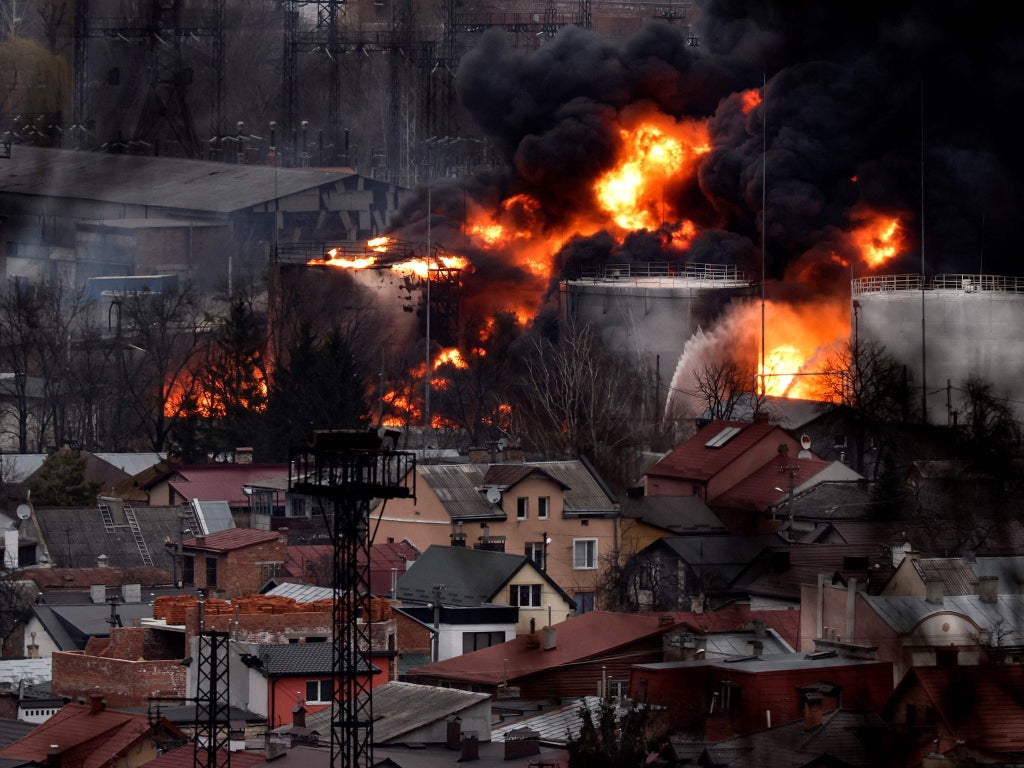 It comes days after Vladimir Putin’s regime claimed its invasion was going to plan and hinted that it would focus on its limited goal of “liberating” the separatist-controlled Donbas region of eastern Ukraine.

Reports from the West suggest the Kremlin’s perceived shift of focus is an attempt to save face after Russia had failed to seize several Ukrainian cities.

Mr Denysenko also said in a televised address that Russia has started destroying Ukrainian fuel and food storage depots, meaning the government will have to move the stock in the near future.

Meanwhile, Putin’s regime is trying to “create a North and South Korea in Ukraine” after failing to takeover the whole country – according to Kyrylo Budanov, head of the Ukrainian millitary intelligence.

He added that Ukraine would soon launch guerrilla warfare in Russian-occupied territory.

Putin ‘like guy in prison eyeing people up, with shank in sock’

Vladimir Putin will “keep on escalating” the conflict in Ukraine until he’s taken down by force, a campaigner said.

Bill Browder, of the Global Magnitsky Justice Campaign, liked Putin to “a guy in the prison yard” who has “his shank in his sock ready to pull it out and eviscerate anyone who disrespects him.”

He adds: “That’s what he’s all about… he’s a guy that needs to be defeated.”

When he was speaking on LBC, he also said he disagreed with the suggestion that Putin could be “topped” by Russians. Instead, he said, the West should “squeeze him economically” as it would be “the least we could do”.

Mr Browder, when asked about the idea of ​​appeasement, said: “Putin is not a guy that ever backs down. If he loses, he comes back harder next time.

“This is not a guy you can negotiate with, he’s like Hitler… he’s an unappealing man that will keep on escalating every possible moment. He will lie, he will cheat, he will agree things and then betray those agreements.”

He told the Qatari TV channel that war in Ukraine was not justified but channels of communication with Russia must be kept open.

“Turkey is trying to end the war in Ukraine through dialogue with Moscow and Kyiv,” Mr Kalin also said.

Referendums in occupied Ukraine ‘would have no legal basis’

Russian-backed referendums held in occupied Ukrainian territory would have no legal basis and would face a strong response from the international community, Ukraine said.

Earlier today, Leonid Pasechnik said that a referendum on joining Russia could soon be held in the self-proclaimed Luhansk People’s Republic (LPR) in eastern Ukraine.

“All fake referendums in the temporarily occupied territories are null and void and will have no legal validity,” Ukraine’s foreign ministry spokesperson Oleg Nikolenko said in a statement to Reuters.

“Instead, Russia will face an even stronger response from the international community, further deepening its global isolation.”

Pope Francis steps up his pleas for negotiations to end the fighting in Ukraine.

Pope Francis told the public in St. Peter’s Square on Sunday that “this cruel and senseless war” continues after more than a month, representing “a defeat for all.”

He lamented that parents are burying their children, and “the powerful decides and the poor die.”

Referring to reports that about one-half of all the children in Ukraine have been displaced by the conflict, Francis said that “war doesn’t just devastate the present but also the future of society.”

The pontiff reiterated his condemnation of war as barbarous and sacrilegious. He said that “humanity must understand that the moment has come to abolish war, to cancel war from the history of man before it cancels man from history.”

The CEO of French grocery chain Auchan said exiting Russia would result in job losses and not peace, Bloomberg has reported.

“If Auchan leaves, we’ll deprive 30,000 of their job” in Russia, CEO Yves Claude said. An exit would also expose local managers to criminal proceedings for fraudulent bankruptcy, I added.

ICYMI: Russian general who told troops war would be over ‘in hours’ killed in Ukraine

Another Russian general has been killed in combat, according to Ukraine’s defense ministry, Liam James reports.

Lieutenant General Yakov Rezantsev is the seventh general Ukraine claims to have killed since Russia invaded.

Oleksiy Arestovych said Rezantsev died amid intense fighting at Chornobaivka airfield, a site near Kherson which Russian forces have been using as a command post. Days after the invasion began, Rezantsev was confident the Russian campaign would be successful within a matter of hours, according to a conversation intercepted by the Ukrainian army.

Read the full story below:

The leader of a separatist region in eastern Ukraine says he wants to hold a referendum on joining Russia. Leonid Pasechnik, head of the self-proclaimed Luhansk People’s Republic, said on Sunday that it could hold a vote “in the nearest time”, asking voters whether they support making the region part of Russia.

Russia has supported the separatist rebels in Luhansk and the neighboring Donetsk regions since an insurgency erupted there in 2014 shortly after Moscow’s annexation of the Crimean Peninsula.

And just before the invasion of Ukraine on February 24, Moscow recognized their independence.

Read the full story below:

Volodymyr Zelensky has accused the West of lacking courage in helping Ukraine defend itself against Russia.

The Ukrainian president made a plea for fighter jets and tanks to maintain the Ukrainian defense efforts.

He criticized the West’s “ping-pong about who and how should hand over jets and other defensive weapons to us”.

In a video address earlier today, Mr Zelensky said: “I’ve talked to the defenders of Mariupol today. I’m in constant contact with them. Their determination, heroism and firmness are astonishing.”

He added, in a jab to the West: “If only those who have been thinking for 31 days on how to hand over dozens of jets and tanks had 1 per cent of their courage.”

People in Lebanon and South Korea have been protesting today against Russia’s invasion of Ukraine.

In Seoul, near the Russian embassy, ​​people – largely Ukrainians – rallied while holding boards such as one that depicts Vladimir Putin as a Grim Reaper-like skeleton with the words: “You reap what you sow.”

Another placard says “stop trading with Russia” and one has a picture of a children’s playground with the words “does this look like a military base?”

Lebanese and Ukrainian people gathered in Beirut to wave Ukraine’s flag during their protest.

Roskomnadzor, at the request of the prosecutor general’s office, also blocked the website of Alexander Nevzorov – a journalist and former member of the Russian parliament.