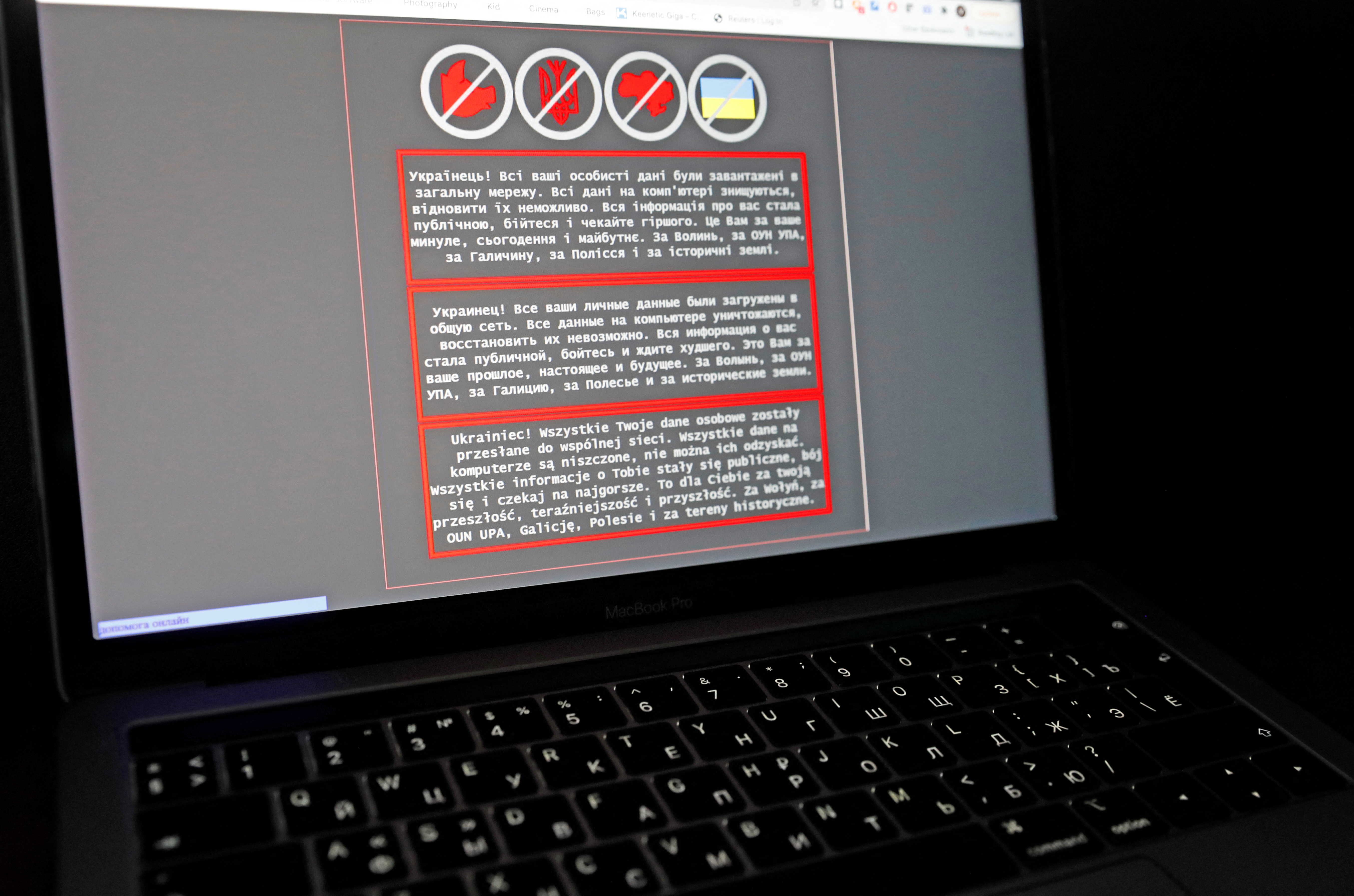 Ukraine has denounced this Friday a massive cyberattack against several websites of the country’s government, which managed to include threatening messages against Ukrainians on those pages. “Be afraid and expect the worst,” they said. The computer attack that has left several state pages out of service for hours occurs at a time of high tension accumulated by the concentration of Russian troops near the Ukrainian borders, and follows the failed end of diplomatic talks between Moscow, the United States , NATO and the Western allies to try to de-escalate the situation and dissuade Russian President Vladimir Putin from initiating a new military aggression against Kiev. After the abrupt outcome of the negotiations, the Russian Foreign Minister, Sergey Lavrov, has stressed that Moscow has “run out of patience” and is seeking written guarantees that NATO will not expand towards Russian borders. “The West has been driven by arrogance and has exacerbated tensions in violation of its obligations and common sense,” Lavrov insisted.

No group has claimed responsibility for the cyberattack that has affected various agencies, such as the Cabinet of Ministers, the Foreign Ministry, the Ministry of Education or the Department of Emergency Services, and the Ukrainian Government has not directly pointed to Russia, although has recalled the history of similar attacks in the past coming from Russia. For weeks, experts, senior Ukrainian and Western officials have warned of the possibility of cyber attacks against Ukraine as a formula to destabilize the country as a prelude to further military action.

The hackers managed to post on the targeted web pages an intimidating message addressed to Ukrainians and written in three languages: Ukrainian, Russian and Polish: “Ukrainians! All your personal data has been posted on the network. Be afraid and expect the worst. All data on the computer is destroyed and cannot be recovered. All information about you has been made public (…) This is for your past, present and future”, stated the text, which appeared next to several threatening symbols, including a crossed out Ukrainian flag, and which raised a series of historical grievances between Poland and Ukraine.

The Ukrainian state security service (SBU) speaks of “provocative messages” and has assured that it has information that the Russian special services are preparing actions and then blaming Kiev. The attack that has brought down dozens of websites has lasted several hours, although the Ukrainian government assures that there has been no security hole that would expose data of its citizens, despite the fact that some of the attacked sites, such as the service platform Diia public that collects vaccination certificates, store sensitive information.

The high representative of foreign policy of the European Union, Josep Borrell, has expressed his “strongest condemnation” of the cyber attack. “Sadly, we knew this could happen. Of course I can’t point the finger at anyone because I have no evidence, but we can imagine”, he said upon arriving at a meeting in Brest (France) with the EU foreign ministers.

Ukraine has suffered a series of cyberattacks since 2014, which, in previous episodes, managed to cut off electricity or disable supermarket checkouts, and forced the government to adopt additional security measures around the national currency, the hryvnia, after that the computer systems of the banks collapsed. The Kiev authorities believe that these attacks are part of what they define as a “hybrid war” by Russia against Ukraine.

In 2017, a virus called NotPetya by some experts affected the former Soviet republic and spread throughout the world, paralyzing thousands of computers while proliferating in dozens of countries. The Kremlin denied any involvement and called these accusations baseless.

The United States ambassador to NATO, Julianne Smith, pointed out this Friday to the Financial Times that it is analyzing the situation and that Washington awaits more data on the cyberattack. If the hack is proven to be Russian, he said, “certainly” it could be considered an example of aggression against Kiev and could lead to new sanctions against Moscow.

Russia, in full talks with Washington and the Atlantic Alliance – in which Ukraine aspires to enter but for which there is still no prospect on the table – has begun new military maneuvers near the neighboring former Soviet republic and on the Ukrainian peninsula of Crimea, which was annexed in a referendum deemed illegal by the international community. Exercises that add to the already electric atmosphere due to the accumulation of some 100,000 Russian soldiers next to Ukraine, which has made US intelligence fear that Moscow is preparing a new military aggression.

Minister Lavrov has insisted this Friday that Moscow will not wait “tirelessly” for a security agreement with NATO for which he blamed the United States. “We are sure that with good will, a willingness to compromise, it is always possible to find a mutually acceptable solution,” Lavrov said at his annual press conference, in which he assured that Washington has slipped that it could respond to these proposals in one week. “At the same time, we continue to prepare for any possible course of events,” added the minister, who pointed out, without specifying, that the failure of the negotiations could involve the “deployment” of military material. The Atlantic Alliance has already stressed that it does not grant Moscow the right of veto in accession to NATO and that Russia has no voice in the expansion process of the military Alliance or in matters that concern the sovereignty of other countries.

The idea that Ukraine is getting closer to the West and moving away from Russia’s orbit is one of the main concerns of Russian President Vladimir Putin, who in recent times has deepened his thesis that Russians and Ukrainians are “ one people” and that Ukraine is on its way to becoming a NATO “aircraft carrier”. As he demonstrated in 2014, by annexing the Crimean peninsula and by politically and militarily supporting the pro-Russian separatists in Donetsk and Lugansk who are fighting the Kiev Army, for the Kremlin leader, keeping Ukraine under his thumb is one of the main workhorses of Russian foreign policy.

Farming: Scientific study shows fertilizer use could be cut