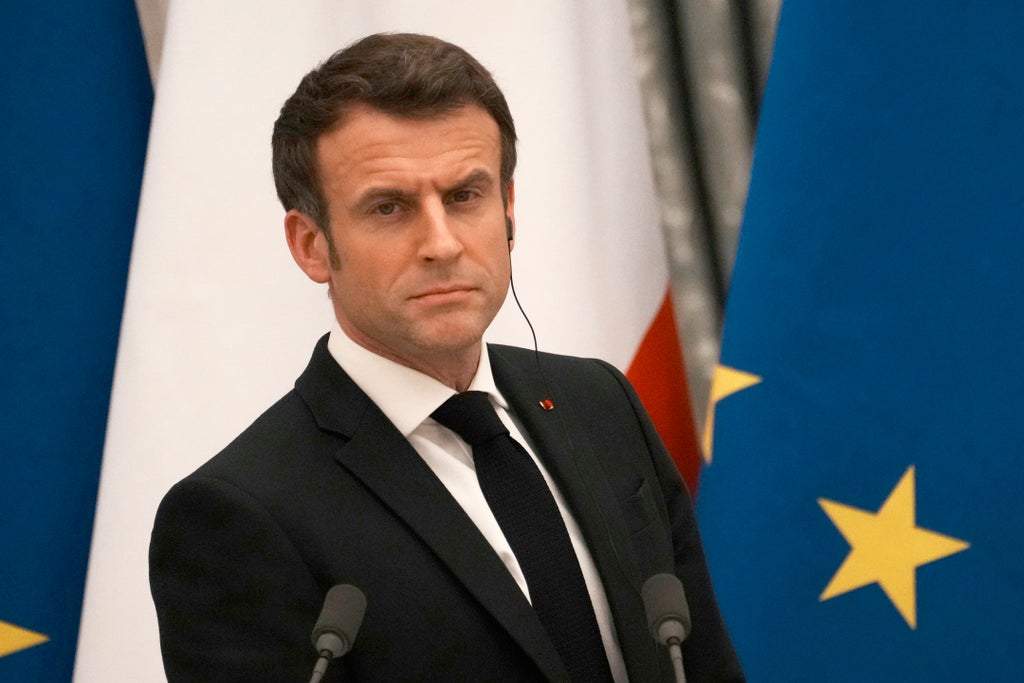 Mr Macron is set to meet with Ukrainian president Volodymyr Zelenskyy as fears of a possible Russian invasion mount. Moscow has massed over 100,000 troops near Ukraine’s borders, but insists it has no plans to attack Ukraine.

The Kremlin has demanded guarantees from the West that Nato will not accept Ukraine and other former Soviet nations as members, halt weapon deployments there and roll back its forces from Eastern Europe — demands the US and Nato reject as nonstarters.

While Vladimir Putin told Mr Macron that Moscow would “do everything to find compromises that suit everyone”, raising the prospect of a path to de-escalating the volatile situation, disagreements between the two leaders were apparent.

Progress on Ukraine’s desire to join Nato remain in deadlock as Mr Putin remained staunchly against the idea, insisting that the US and the alliance have ignored Moscow’s demands.

He also warned that Ukraine’s accession to Nato could trigger a war between Russia and European countries. “If Ukraine becomes a Nato member and moves to reclaim Crimea, European countries will automatically be drawn into a military conflict with Russia,” Mr Putin said, noting that “there will be no winners”.

“Do you want France to go to war with Russia?” Mr Putin added.

In the first direct meeting between Russia and a major western leader during the crisis, Mr Putin said several proposals put forward by Mr Macron at the talks could form a basis for moving forward on the crisis over Ukraine but added that more conversations were needed.

“President Putin assured me of his readiness to engage in this sense and his desire to maintain stability and the territorial integrity of Ukraine,” Mr Macron said.

In a potential sign of easing tensions in the region, Putin has agreed to not carry out new military initiatives near Ukraine, according to a French official.

According to the official, the Russian leader also agreed that troops taking part in a military exercise on Belarusian territory near Ukraine’s border would be pulled back once the drills were over.

Mr Putin did not mention the concession when speaking to media after the meeting but agreed he would have a call with Mr Macron following his meeting in Kiev.

Meanwhile in Washington, German chancellor Olaf Scholz met with the US president on Monday where Mr Biden vowed that the Nord Stream 2 Russia-to-Germany gas pipeline, which has been completed but is not yet operating, will be blocked “if Russia invades, that means tanks and troops crossing the border of Ukraine again”. Such a move would hurt Russia economically but also cause supply problems for Germany.

Mr Scholz warned Moscow that “a lot more could happen than they’ve perhaps calculated with themselves” in case of an invasion.