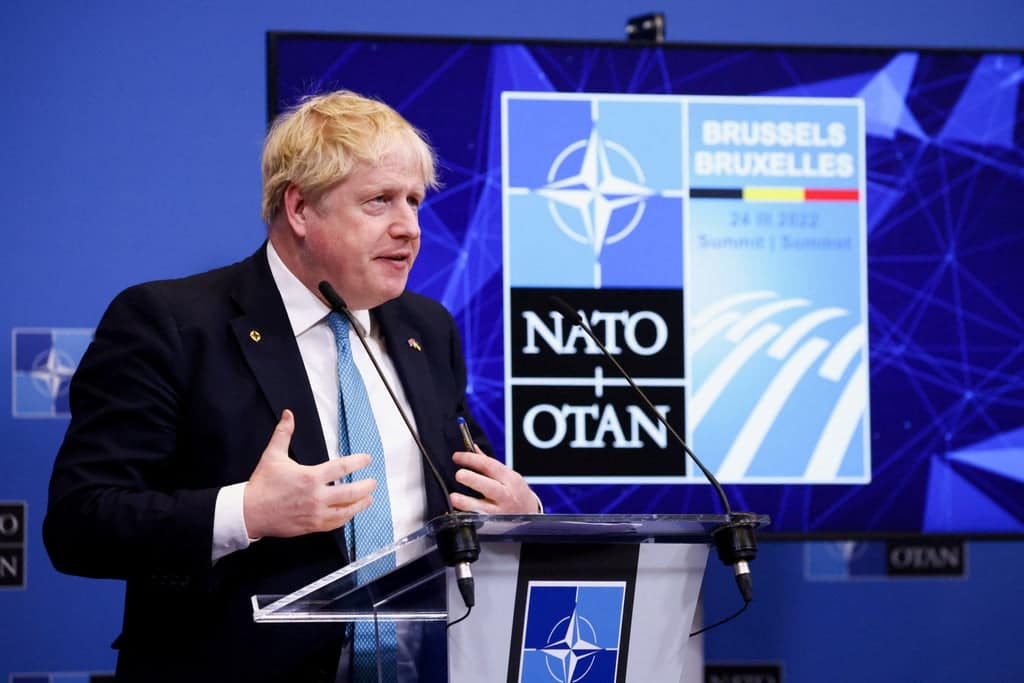 Ukrainian forces are driving back the Russians from around Kyiv, British military intelligence has said, as Prime Minister Boris Johnson said they can “certainly win” against the invaders.

The latest assessment from the Ministry of Defense said the Ukrainians were expected to continue to try to push the Russians away from the capital.

“Ukrainian counter-attacks, and Russian forces falling back on overextended supply lines, has allowed Ukraine to reoccupy towns and defensive positions up to 35 kilometers (22 miles) east of Kyiv,” it said.

In the south of the country, it said the Russian advance on the key Black Sea port city of Odesa was being slowed down by “logistic issues and Ukrainian resistance”.

Following a day of talks on Thursday with Nato and G7 allies in Brussels, Mr Johnson acknowledged the situation for the Ukrainian people was “grim, miserable”.

But in an interview with BBC2’s Newsnight, he praised their “Churchillian” leader Volodymyr Zelensky and said: “I think Ukraine can certainly win.”

“There’s a sense in which Putin has already failed or lost because I think that he had literally no idea that the Ukrainians were going to mount the resistance that they are, and he totally misunderstood what Ukraine is,” he said.

“And far from extinguishing Ukraine as a nation, he is solidifying it.”

However, Mr Johnson conceded it would be a challenge to give Mr Zelensky the tanks he has demanded to fight the Russian invaders.

The Prime Minister said it would “logistically” be “very difficult” to supply the Ukrainian president with the tanks and jets he asked for during the Nato summit on Thursday.

He pledged more missiles and a new deployment of UK troops to Bulgaria, while doubling personnel in Poland and Estonia to boost Nato on the eastern flanks.

Western allies have previously been hesitant about providing jets out of concerns it could further provoke Russian president Vladimir Putin.

Mr Johnson accepted Mr Zelensky wanted more from Nato, saying allies felt “agony” about their “inability to do more given the constraints we face”.

Nato leaders agreed on Thursday that Russia using chemical weapons would mark a “fundamental change” in the Ukrainian conflict that would be met with a “very severe response”.

However, a Western official declined to outline what the response would be, saying “we need to keep Putin guessing.”

Later, at a press conference, US president Joe Biden said there would be a “response in kind” but declined to spell out what that would involve.

Mr Johnson warned against allowing the threats over chemical, biological and nuclear weapons to become a “distraction”.

He said: “It’s intended to be a distraction from what is really going on and that is a savage attack with conventional means on innocent people in urban centers in Ukraine, absolutely barbaric use of artillery and mortars and rockets as I’ve described, thermobaric bombs included it now seems, that is what is going on.”

However, Nato secretary general Jens Stoltenberg announced an agreement to provide equipment to protect against biological, chemical and nuclear threats and assistance in the cyber-security sphere.

It came as the Foreign, Commonwealth and Development Office (FCDO) said Russian intelligence services had targeted national infrastructure including UK energy companies and the engineering and industrial sectors in a “calculated and dangerous” hacking campaign spanning nearly a decade.

The UK and western allies have linked Russia’s Federal Security Service (FSB), the successor agency to the KGB, to “a historic global campaign targeting critical national infrastructure”, the FCDO said on Thursday.

The department said the National Cyber ​​Security Center (NCSC) was “almost certain” that the FSB’s Center 16, which it said was also known by its hacker group pseudonyms of Energetic Bear, Berserk Bear and Crouching Yeti, had targeted critical IT systems and national infrastructure in Europe, the Americas and Asia.

“It shows (Vladimir) Putin is prepared to risk lives to sow division and confusion among allies.”