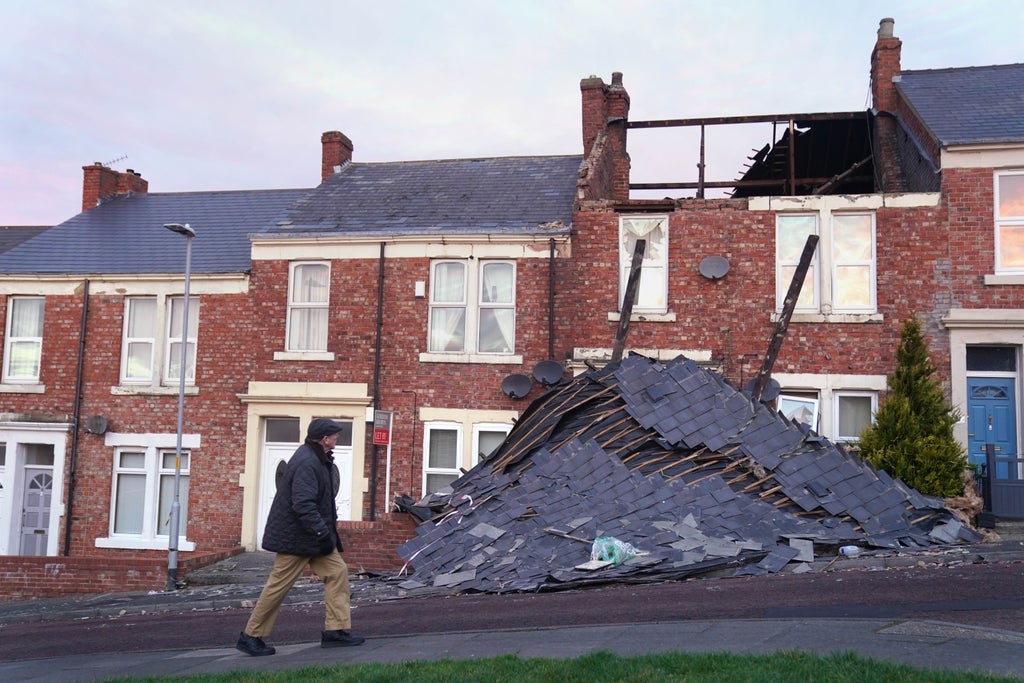 Residents are being warned to prepare for the possibility of flooding in areas covered by the alerts.

Storm Dudley is expected to hit northern parts of the UK on Wednesday and Thursday before Storm Eunice arrives on Friday.

Amber and yellow wind warnings are in place for northern England, Scotland and Northern Ireland from 3pm on Wednesday until 9am on Thursday.

A yellow warning will also cover the southern part of Scotland, northern England and Northern Ireland on Friday until 9pm.

Met Office meteorologist Tom Morgan, said: “This whole week is going to see quite a disturbed weather pattern developing across the UK”.

He said western parts of Scotland will “bear the brunt” of the strongest winds which could cause “widespread disruption.”

Strong winds of up to 90mph brought by Storm Dudley could put lives at risk, forecasters have warned.

The Met Office has issued an amber warning for “very strong” winds on Wednesday which could cause widespread chaos, including a “good chance” of power cuts and disruption to transport services.

The warning says: “Injuries and danger to life is likely from large waves and beach material being thrown onto coastal roads, sea fronts and properties.”

The warning is in place from 4pm until midnight and covers a large belt across the middle of the UK, including regions north of Hull in the East Riding of Yorkshire and south of Perthshire in Scotland.

Forecasters have said residents in this region can also expect heavy showers throughout the afternoon and snow on high ground.

“It’s going to be a windy day throughout with those winds continuing to pick up through the afternoon and the evening,” he said.

“There will be some snow on the hills across Scotland, but it’s the rain and more particularly the wind we’re concerned about in this storm system on Wednesday.

“It’s likely to cause transport disruption and dangerous conditions by the sea.”

Some ferry services in Scotland are being canceled as Storm Dudley threatens to bring huge waves.

Ferry operator CalMac is anticipating waves of up to 12 meters (39ft) around the Hebrides – the height of three-storey buildings.

Manging director Robbie Drummond told the BBC there would be no sailings later tomorrow, adding the company is adjusting its timetable.

He said: “Our team will be working closely with local communities to understand their priorities and also ensure essential goods and services are moved where possible.”

Clouds, rain and winds as Storm Dudley sets in

There will be clouds, rain, and winds tomorrow as Storm Dudley moves in from the north west, according to the Met Office.

Despite Wales, temperatures will be mild for this time of year, the forecaster said.

It will be very windy with severe gales for central and northern parts of the UK tomorrow.

Train services in Scotland will end at 4pm tomorrow as the country braces for the first of two storms.

ScotRail made the announcement ahead of Storm Dudley.

Gusts could rise as high as 90 miles per hour in coastal areas, and the Met Office has issued an amber weather warning for the central belt and south of Scotland, as well as the north of England.

The warning is set to come into force at 4pm tomorrow.

Storm Eunice: Where are weather warnings in place?

Storm Eunice is set to bring strong winds and the chance of snow for parts of the country on Friday.

The storm will move across central areas of the UK and there could be heavy rain – as well as snowfall in the Midlands and further north, according to the Met Office.

The graphic below shows where a yellow warning for gale force winds is in place.

Ice alerts could be issued later in the week, on top of warnings over snow, wind and rain, the Met Office says.

Storm Dudley is expected to hit northern parts of the UK on Wednesday and Thursday before Storm Eunice arrives on Friday.

Storm Dudley: Where are weather warnings in place?

Storm Dudley will be the first of the two tempests.

It will hit the northern half of the UK from tomorrow afternoon through Thursday.

The graphic below shows where the Met Office has issued a yellow warning for wind – and were an amber warning for stronger and more disruptive tastes is in place.

This Met Office graphic shows how the two storms will develop this week.

It says they are beige driven by a powerful jet stream which if fueling areas of low pressure.

“This will bring #strong winds and #gales across parts of the country this week,” the service says.