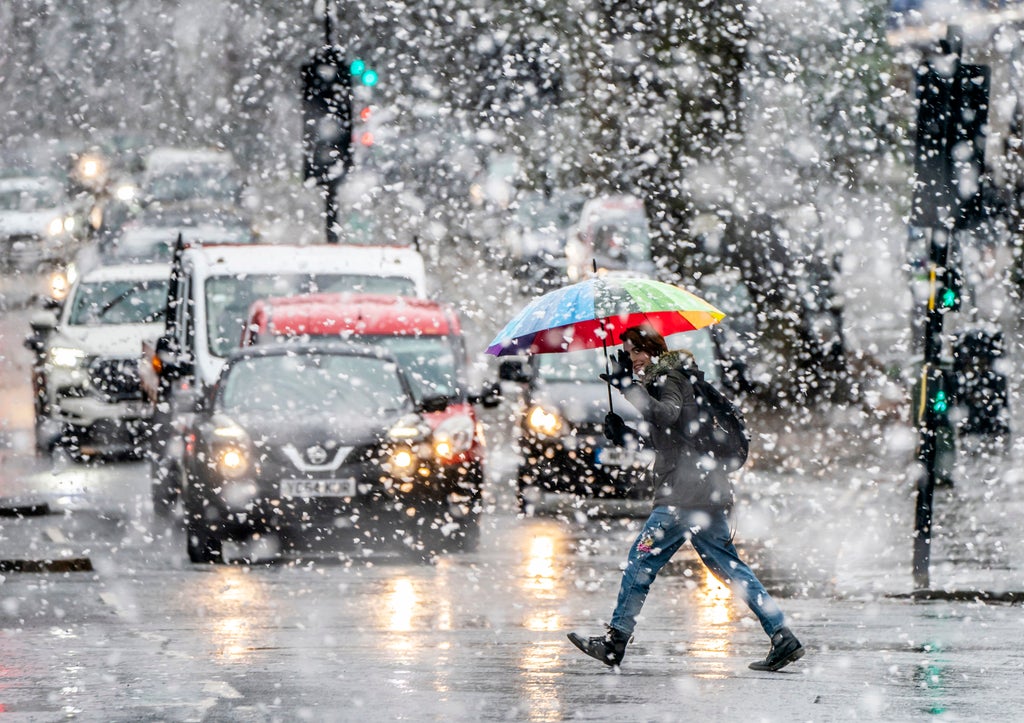 A heavy blanket of snow has fallen in parts of northern England and Scotland in the aftermath of fatal destruction caused by Storm Eunice.

The Met Office had put a yellow warning in place for snow in areas including Greater Manchester, Isle of Man, Lancashire, Staffordshire, and Yorkshire from 11am until 3pm on Saturday.

Up to eight inches of snow will have fallen in some areas, according to weather mappers WX Charts, after Storm Eunice caused severe damage across the UK and Ireland on Friday – less than 48 hours after Storm Dudley took hold.

In Lancashire, people on the Big Dipper ride at Blackpool Pleasure Beach were evacuated after it reportedly “stalled” amid the heavy snow. Blackburn Rovers’ home match against Millwall was also cancelled.

Some “temporary disruption” to road and rail travel is expected as a result of the “short especially across higher ground, the Met Office had said.

The forecasters added: “Rain may turn to heavy snow in a few places later this morning and early this afternoon.

“This is most likely on roads above 200 meters elevation, such as across the Peak District, but also a lower likelihood to some lower elevations in Yorkshire.

“Some places could see 2-4 cm of slushy snow which could build up quite quickly, before conditions ease from the west this afternoon.”

In York, the city center was also impacted by flooding, after the Ouse River burst its banks after heavy rain during Storm Eunice.

In Scotland on Friday, heavy snow in Aberdeen hindered paramedics’ mission to take a poorly 10-month-old baby and her mother to hospital.

Melissa Macleod said it took two hours for the ambulance to get her daughter Jessica Louise to the Royal Aberdeen Children’s Hospital, as the vehicle became stuck on a hill in heavy snow at about 11am – according to the daily-record.

Passers-by helped push the ambulance up Tyrebagger Hill so that the baby, who was born with a congenital heart defect, could make it to hospital to be treated for a respiratory infection.

Also on Friday, severe damage caused by Storm Eunice killed three people in the UK and one in Ireland.

Hundreds of thousands of households have been without power following the storm that has been one of the worst since the ‘Great Storm’ of 1987.

“Changeable” weather is forecast to continue this weekend.

On Sunday, some areas in the northwest will have “persistent rain”, before the heavy rain with strong wind “sweeps southeast” – according to the Met Office.

“This followed by brighter weather and showers – winter in northwest,” the Met Office added.

Monday to Wednesday is forecast to be “changeable and often windy”, the forecasters said, with “wintry at times in the north” and “colder nights with occasional frost.”