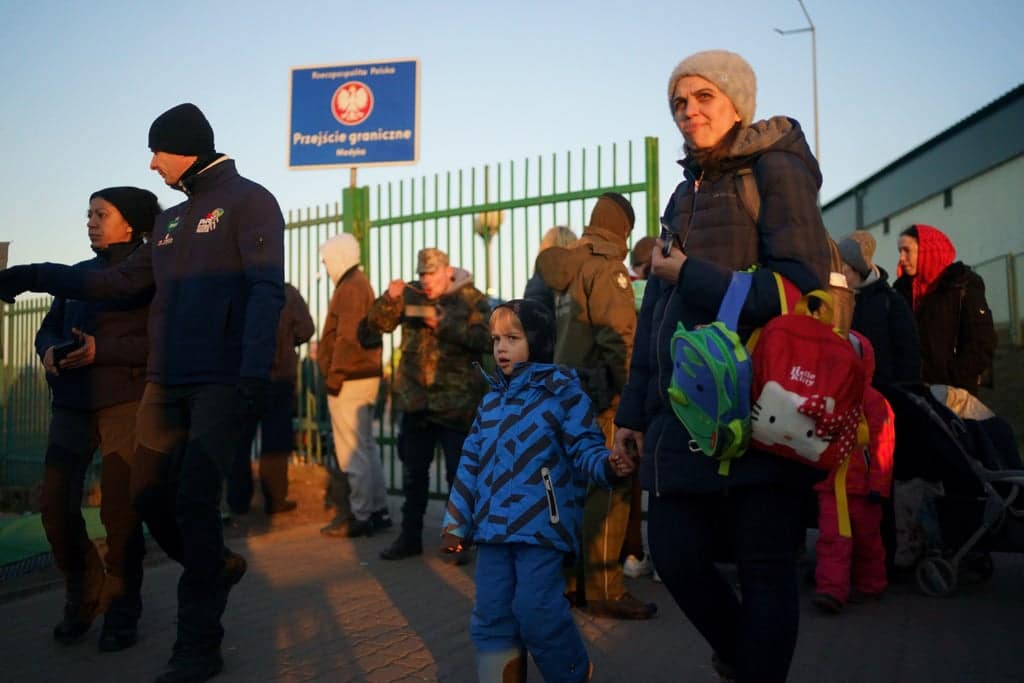 The UK’s Ukrainian refugee visa scheme is “taking so long” while families wait in conditions where an hour “feels like a week”, a couple offering up their home said.

Chris Tattersall, 63, and his wife Anne, 62, said they have been communicating with a family stuck in Poland for two weeks but no progress has been made in getting them to the UK.

The couple, from Torrington, Devon, registered to take part in the Homes for Ukraine scheme and posted an online advert offering two spare bedrooms vacated by their sons.

Two weeks ago, they were connected with Alana, a mother stuck in Poland after fleeing Ukraine with her nine-year-old child, grandparents and a pet cat.

“Every hour somebody is sat there with a child and with a bag is like a week, a day is like a year and almost a month is like a lifetime,” Mr Tattersall told the PA news agency.

“Everything is taking so long when you’ve got people with nothing.

“We can offer shelter and love… I’m sure the majority of people like myself, they’ll do anything just to make it work.”

Mrs Tattersall, who is originally from Ireland and has lived in Devon for 37 years, said there was “no help at all” for Alana and her family when they were trying to cross the Ukrainian-Polish border.

“I mean, it’s a war, why can’t they just let them in? And then we can process them the same way in which Ireland did,” she said.

“Every other country has pulled out all the stops, but not the UK.”

There are two UK schemes for Ukrainian refugees: the Homes for Ukraine sponsorship scheme, for which anybody with space to house a refugee can apply; and the Ukraine family scheme, for those who already have relatives in the UK.

Some 10,200 visas had been issued under the Ukraine family scheme as of 4pm on Sunday, and a total of 31,500 applications had been submitted, according to provisional data published on the Home Office’s website.

Data for the Homes for Ukraine scheme has not yet been released, but Health Secretary Sajid Javid said 150,000 people had expressed an interest in hosting refugees through the programme.

UK-born volunteers who have traveled to Europe to assist in the refugee crisis have also criticized the Government for leaving women at risk of trafficking because of delays with their visa applications.

Ruth McMenamin, who normally works in marketing but is currently volunteering at Poland’s Warsaw train station, said thousands of Ukrainian refugees are arriving every day for basic health care, toiletries and hot food.

The 34-year-old, from Bristol, has been volunteering at the station for the past week after arriving in Poland on March 11.

She told the PA news agency: “When I rang the Home Office the other day, they said… once they’ve received a match, it would take one week to get the piece of paper that they need to then book a flight.

“That causes quite a lot of problems because they’ve got someone who needs to stay for a week in temporary accommodation and they’ve just traveled for three, four days.

“It’s usually a woman by themselves with a couple of young kids and they’re just exhausted.

“Then there’s obviously all the other dangers around that; there are safeguarding issues.

Ms McMenamin said the process needs to be more “dignified” and the UK Government needs to “throw more resources at this” to process people quicker or allow them into the country, give them a safe place to stay and then allocate them to a household post-arrival.

A Department of Housing, Leveling Up and Community spokesman said: “We are moving as quickly as possible to ensure that those fleeing horrific persecution in Ukraine can find safety in the UK, and our Homes for Ukraine scheme now allows those without family connections to come to the UK.

“We have streamlined the visa application process so valid passport holders no longer have to attend in-person appointments before arriving, allowing us to welcome people faster while still maintaining vital security checks, which ensure those who could pose a threat to our safety are prevented. from getting here.”

A Home Office spokesman added: “The Government is committed to tackling the heinous crime of human trafficking.

“We will continue to clamp down on those who continue to exploit vulnerable people, while providing tailored support for victims to help their recovery.

“We are keeping the situation in Ukraine under review and remain in close contact with the Ukrainian government.”