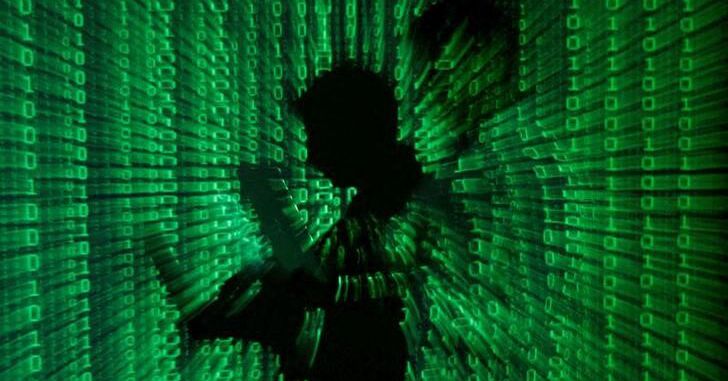 An illustration picture shows a projection of binary code on a man holding a laptop computer, in an office in Warsaw June 24, 2013. REUTERS/Kacper Pempel/File Photo

LONDON, Dec 14 (Reuters) – Google, Facebook and other online services should be held legally accountable for advertisements on their platforms in order to prevent fraudsters scamming millions of consumers, a cross-party group of British lawmakers has said.

Britain has proposed a landmark online safety law to punish abuses such as child pornography, racism and violence against women, but a joint committee of lawmakers drawn from both houses of parliament said on Tuesday it should go a step further to cover paid-for adverts.

The Financial Conduct Authority also wants adverts on social media and search engines, currently excluded from the draft law, to be included after 754 million pounds ($999.65 million) was stolen from consumers in the first six months of this year.

The report also backed a Law Commission recommendation to make cyberflashing, or the unsolicited sending of obscene images or video recordings, which are often a feature of sexual harassment, illegal.

The draft law is due to be approved in 2022 and government has two months to say if it will back the recommendation, along with several others which lawmakers say are needed to “call time on the Wild West online”.

“The era of self-regulation for big tech has come to an end. The companies are clearly responsible for services they have designed and profit from, and need to be held to account for the decisions they make,” said Damian Collins, who chairs the joint committee.

Britain’s communications regulator Ofcom should draw up mandatory codes of practice for the internet service providers, the report said. There must, however, be “robust protections” for freedom of expression, including an automatic exemption for recognised news publishers, it added.

The FCA spent 600,000 pounds on Google to warn about scam adverts, though the online giant has since said it will only take adverts from firms regulated by the FCA, and offered a $3 million credit to the regulator.

“Without a decisive response from the government and the tech giants, many more individuals will sadly fall victim to these scammers,” said Mel Stride, chair of parliament’s treasury committee, which backs the recommendation to help remove fraudulent online adverts.