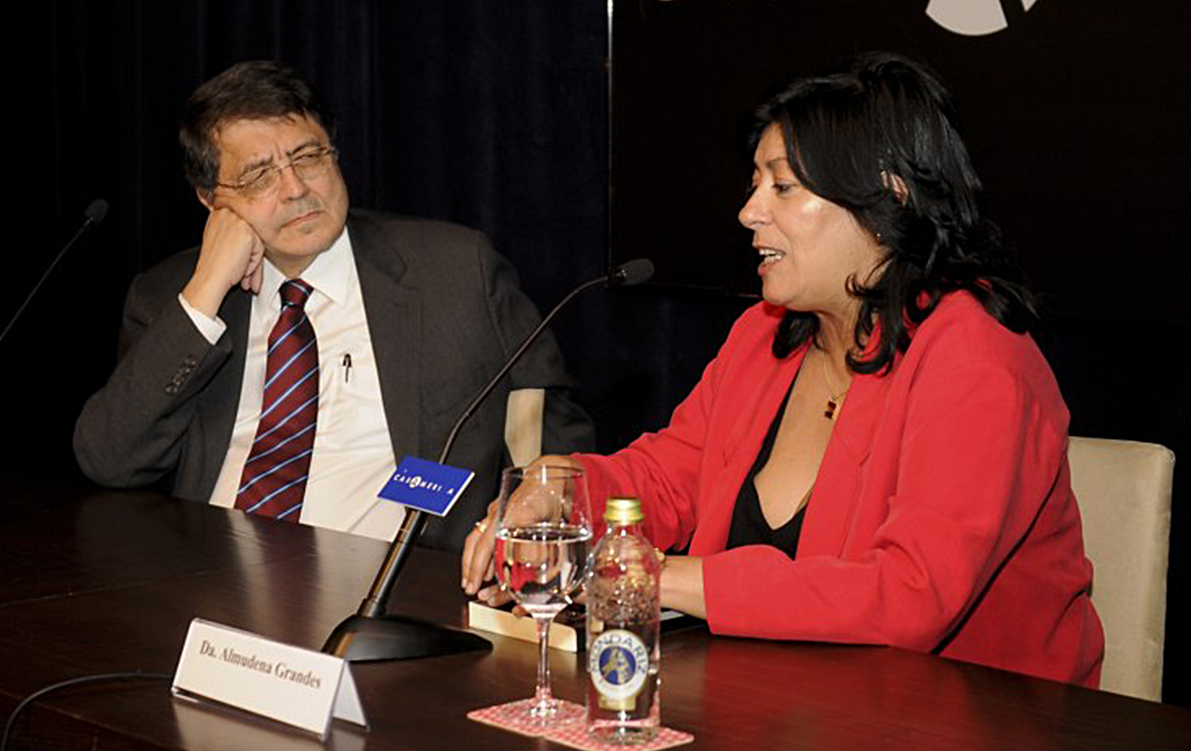 The news of the death of Almudena Grandes – the text message from a journalist friend – surprised me in Guadalajara. I was in the Juan Rulfo auditorium of the International Book Fair, about to take my place among five hundred ill-counted people who would attend the opening of the meeting this year that has taken so much, and the coup forced me to make a great effort to attend to what was happening. And there I was then, hearing without really understanding the words of the first speech, thinking of Almudena and Luis García Montero and his friends who in recent times have also become my friends, when the first speaker broke the news, and never I will forget the sound that then ran through the Juan Rulfo auditorium: the sound of five hundred people taking air at the same time, or, to put it better, the unrepeatable sound of five hundred people who at the same time, briefly, have run out of air.

Since my first years of residence in Spain, around the turn of the century, I had understood well that Almudena Grandes did not have readers, but fans. There was a special intensity in the relationship that her novels had with her audience, or her audience with her, and one of her keys was also the trait that defined Almudena, according to the thousand tributes paid to her after her death: the generosity. I think I remember examples of that generosity – as a woman, as a reader or as a novelist, everything was a bit the same – in Latin America as well as in Spain, but it is true that Almudena’s relationship with Madrid, that city she loved and knew, it was particularly vivid, and it also passed through the place assigned to it by its readers in Madrid, or the way in which the people of Madrid understood the city through their books. That is why it seemed so regrettable to me that certain political groups – blue, resentful, or simply childish – denied her the very simple distinction of Madrid’s favorite daughter. He didn’t need it to be, of course: the distinction had been given to him by his readers a long time ago.

When I learned of that embarrassing incident, I remembered another of the speeches that were delivered that Mexican morning in the Juan Rulfo auditorium. The Nicaraguan writer Sergio Ramírez was speaking, the protagonist despite this uncertain year due to the persecution that the ridiculous autocrats Daniel Ortega and Rosario Murillo have mounted against him. Ramírez mourned Almudena’s death and then gave his speech, one of the most moving that I have heard recently. In a few minutes he spoke of his library, the thousands of volumes patiently accumulated throughout a life as a reader, obtained with effort and lovingly preserved, because the library of a dedicated reader is turning over the years into a kind of autobiography, almost a place of your experience or your emotions.

Ramírez told how he had bought Balzac’s Human Comedy from a bookseller in Clermont Ferrand, an older man who sold it cheaply because too many books took up too much space on his shelves, and how he had to ask his friends for help to carry the collection to Nicaragua. He recounted how he had found the two volumes of Chekhov’s stories, to which he returned frequently, and recounted where his autographed books were, and recounted his joy when he realized, with his copy of The Metamorphosis in Hand, that he was achieving understand Kafka in German. He recounted how he had once hired a librarian to organize the chaos of his books, and recounted how, after receiving his perfectly organized and cataloged library, he became so disoriented in it that he immediately began to mess it up again: to return it to its anarchic order preceding. Finally, he recounted how he had had a wooden lectern built to have on it a special copy of Don Quixote, and said that the lectern had just arrived when the persecution of the laughable couple – the news of the fabricated charges that were brought against him and the repressors’ intention to arrest him – forced him to close down his house in Managua and flee into exile, leaving behind his library: the library of a life.

And I have thought, now that the year is over and we see with a certain perspective what has happened in it, in that curious way that writers have, by their presence or their books, of portraying our lamentable politicians: portraying their smallness or their pettiness. , and also his mendacity and his intolerance. They are exposed, undressed without meaning to, sometimes while talking about something else, sometimes even after they have disappeared: they are put in their place so that we can see them well. We can also be grateful for that.

Juan Gabriel Vasquez is a writer. His latest novel is Look back.