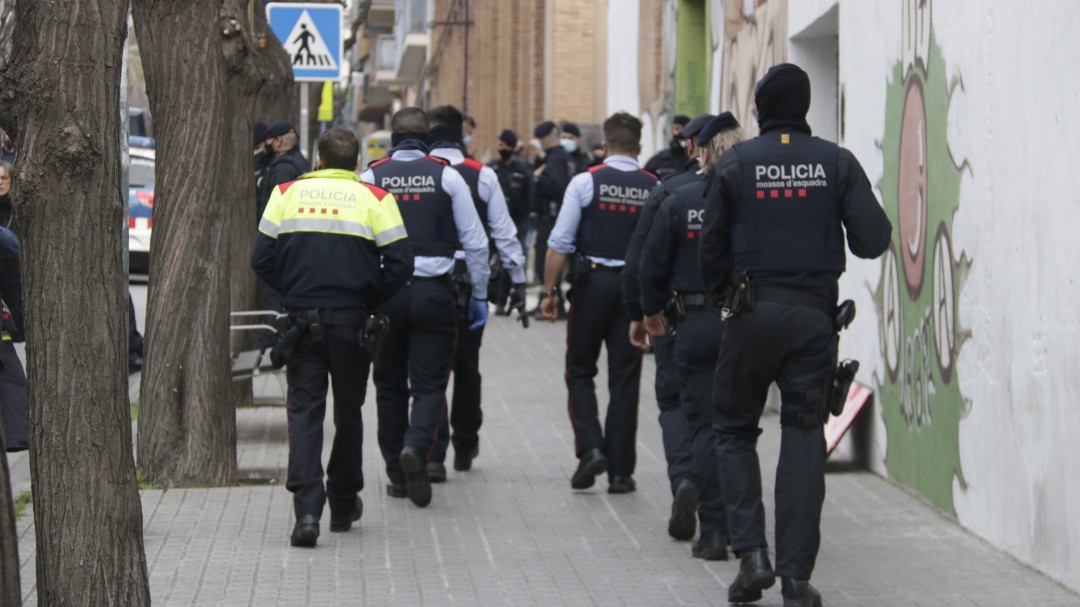 Researchers, investigated. And victim and accused, united against the police. The Yakir operation, of extortion, arms trafficking and money laundering, has ended in a judicial soap opera that could put an end to an investigation of almost three years. A Barcelona judge has charged two sub-inspectors of the national police and a sub-inspector and a corporal from the Mossos d’Esquadra after a complaint of denial of judicial assistance, falsification of documents, omission of the duty to prosecute crimes and disclosure of secrets, according to the documentation to which the Cadena SER has had access. They are accused by Aleksejs Dircenko, president of a shipping company, LUMAR, accused in the National Court of directing a plot of arms trafficking and money laundering. It was he who turned to the Mossos when they began to extort money from him. When they began to investigate, instead of finding the extortionist, they discovered an alleged organization led by who, in principle, was the victim. Then, according to the complaint, the Mossos and the National Police launched a parallel investigation together with the Anticorruption Prosecutor’s Office, without informing the judge, who in principle supervised the investigation.

For this reason, on January 25, the agents of the Eastern Europe Section of the specialized Central Crime Unit and the Economic and Fiscal Crime Unit (UDEF) of Barcelona, ​​both of the National Police, must declare as being investigated; in addition to the Central Organized Crime Area and the Central Laundering Unit, these two, of the Mossos d’Esquadra. “The fact that an investigation against the Mossos and the National Police has been initiated, causes a very serious nullity, since the entire investigation stems from a crime committed by the investigators,” they assure from Direcenko’s defense, exercised by the Matilla & Blay Law Firm .

To understand the mess, we must go back to October 2017. Aleksejs Dircenko, born in Latvia but a Barcelona resident since the 1990s, filed a complaint with the Mossos. They had contacted him in Barcelona, ​​threatening to harm his family, and then he had been summoned by extortionists in Russia. They asked him for up to 6 million euros, and threatened to send the authorities of Spain, Switzerland, Russia or Ukraine false documents with his signature that implicated him in maritime accidents and money laundering activities. Dircenko already identified his former partner in the Ukrainian delegation of the LUMAR shipping company, Vyktor Murenko, as the perpetrator of the extortion. A month later, the judge closed the case. It issued the provisional dismissal of the case as the author had not been found: “the complexity of the facts and the criminal modus operandi require not rushing,” the judge wrote, in a ruling that adds that the filing “does not in any way imply abandonment of investigations by the police, which remain active. “

The investigation had not stopped, although neither the court nor the manager knew it. He asked the Mossos up to four times how the investigations were progressing. The policemen responded to the court two of them. The first, on March 22, asking for time to analyze the data of the complaint. They were investigating. The second was three years later, just days before Dircenko and eight other people, some from his family, were arrested as a result of a parallel investigation. “When the Mossos said they needed time to analyze the data, they had actually already done so. A few days before (specifically, a week) they had presented a report of more than 50 pages in the Anticorruption Prosecutor’s Office with all that analysis,” he regrets the defense of the employer. “They said that they were acting under the tutelage of the Barcelona court, which has already said that it is not true,” he says.

Two years later, investigators ask to meet with the judge to show surprising progress: the victim had become a defendant, in command of a large-scale arms laundering and trafficking scheme. The prosecution had known for a long time. In fact, he had even filed a complaint in the National Court against Dircenko and his collaborators, thanks to the report from the Mossos and the National Police. The investigators had informed them of the “existence of a transnational criminal organization that had settled” in Catalonia and Valencia, specifically, in Barcelona and Calpe. “Dircenko directs and controls, from Spain since before 2000 a network of international companies as owner of merchant ships involved in arms trafficking,” the prosecutor later wrote.

Dircenko, according to them, was involved in the ransom of 3.2 million euros that was paid in 2008 to the Ukrainian ship Faina, captured by Somali pirates while transporting heavy weapons to Kenya from Odessa, the main port of the Russian mafia. Inside: 33 armored cars and weapons. The ship was managed by a shipping company in the hands of the Ukrainian businessman Aleandrovich Alperin, known as “the king of smuggling.” Five years later, another ship with 20,000 rifles bound for Syria is intercepted in Greece, a ship that, according to the United States, had previously been used for drug trafficking. In 2017, also in Greek waters, a third ship stopped: the Mekong Spirit. The latter is managed directly by LUMAR, the company run by Dircenko. Inside, 52 containers, loaded in Santander, and 29 containers from Turkey, all full of weapons and explosives headed for Sudan. In September 2020, however, a Greek court acquitted him. It established that the cargo from the Mekong was legal and that the consignee was a company of the Government of Sudan destined for mining. The weapons inside had been destroyed to avoid an accident like the one in Beirut.

The Prosecutor’s Office also reported a complex corporate network, allegedly dedicated to bringing out benefits, according to the prosecutor, from arms trafficking. “Apparently they do not have financial availabilities in Spain, nor significant investments, which contrasts sharply with their high standard of living in Spanish territory, the high salaries they have enjoyed and the real estate they have in Spain (…) in Several companies have a single employee who is employed and, in others, they do not declare employees for several years, “the prosecutor pointed out about Dircenko’s businesses. Dircenko and his alleged extortionist, Murenko, in addition to 7 other people and 6 commercial companies, were charged with the crimes of money laundering from a crime of arms trafficking and the crime of criminal organization. All of them were arrested just over a year ago and the National High Court sent three of them to preventive detention, including Dircenko and Murenko, alleged victim and extortionist, now united against the police investigation. The defense of the businessman criticizes that the investigators ignored the alleged crime of extortion that Dircenko had denounced. “It is logical to think that the investigation of a crime of money laundering does not constitute an impediment to the investigation of a crime of extortion,” they criticize from the firm, also recriminating that the Prosecutor’s Office, “knowing that there was a Court investigating these facts, began a parallel investigation “.