The fifth prizes of the Christmas Lottery 2021 have distributed luck in Hego Euskal Herria. Barakaldo and Azkoitia have been the most graceful, but they have not been the only ones. This year’s draw has also left the odd pinch in Bilbao, San Sebastián or Berriz.

The first of the fifth prizes of the 2021 Christmas Lottery was sung at 09:24 and went to the number 92052. Endowed with 60,000 euros to the series, among the towns in which this number has been distributed is the municipality of Barakaldo.

Administration lottery number 12, which is closed today due to the strike, has sold 80 series of 92052 and 60 of them have gone to the AMPA of the Arteagabeitia College, that will sweeten Christmas to more than 400 families. Son 3.6 million euros. 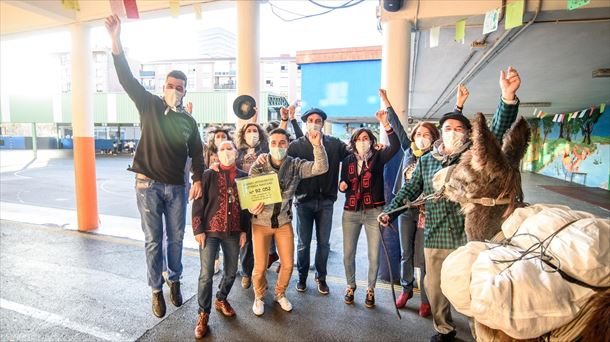 After 10:00 hours a second fifth prize has come out, 70316, also endowed with 60,000 euros of the series. However, this award has not distributed luck in Hego Euskal Herria. It has been sold in Madrid or Barcelona, ​​among other locations.

At 11:13 hours the third fifth prize has come out: 26711. Although it is distributed, a series (endowed with 60,000 euros) has been sold in the lottery administration El Tambor de Oro de Saint Sebastian (Narrica street).

The number 24198, which was sung at 11:46, has been awarded the fourth of the eight fifth prizes of the Extraordinary Christmas Lottery Draw. This award went mainly to Alciante, with 130 series in administration number 1 in Benidorm, and 18 in number 6 in Elche; and also in San Sebastián de los Reyes (Madrid), with 15 series.

69457 and 89053, two fifth prizes sung practically in a row after 12:30, have not left any pellico in Euskadi. The fifth fifth prize of the Christmas Lottery has fallen in full in San Pedro Alcantara, while the sixth fifth prize went to Balearic Islands.

34345, the seventh-fifth prize widely distributed, has fallen in Bilbao Y Again. Specifically, in Bilbao it has fallen into the popular Azcarreta Lottery Administration, located in the Old Town, which has already distributed part of a fourth prize. In Berriz, he has played at the office on Calle Estación, number 9. In both cases, they are pinches. In total, two series that add up to 120,000 euros.

The last fifth prize, the number 89109, awarded 60,000 euros to each series, has fallen in Azkoitia Y Bilbao. The Azkoitia administration located at Kale Nagusi, 37, had assigned 60 series of 89109, while the State Betting and Lottery store located at Calle Alameda Urquijo, 52, in Bilbao, had a series assigned.