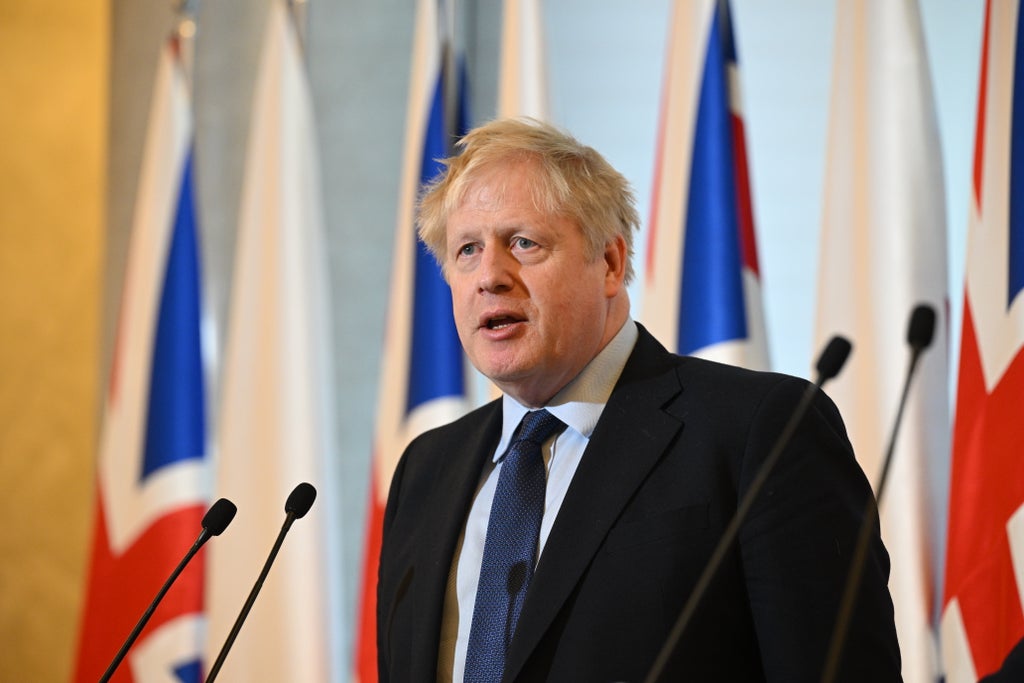 The only way out of the “morass” in Ukraine is for Vladimir Putin to turn his tanks around and send his troops home, Boris Johnson has said.

The Prime Minister sent a direct message to the Russian leader in a speech in Warsaw, where he insisted tough sanctions against the Kremlin were not meant to hit the Russian people.

Speaking at the British Embassy, ​​Mr Johnson said that if Mr Putin was allowed to win in his invasion of Ukraine, he would “overthrow the post-Cold War order and destroy the vision of a Europe whole and free”.

“The outcome will be a world where aggression is triumph, where might is right, and extreme violence pays off, and no nation would be safe,” the Prime Minister said.

He underlined the UK’s support for Ukraine and praised the bravery of Ukrainian President Volodymyr Zelensky.

“When I think of the dangers and the pressures, the physical dangers that he must be facing, I marvel at his coolness under fire, his bravery, his invincible good humour.

“I think he is mobilizing the world against the horror of what is happening.”

It came as the Prince of Wales said the values ​​of democracy were under attack in Ukraine in the “most unconscionable way”, adding: “We are in solidarity with all those who are resisting brutal aggression.”

Meanwhile, there was a mass walkout from the UN Human Rights Council as Russian foreign minister Sergei Lavrov addressed the members.

UK Foreign Secretary Liz Truss said his statement was “full of disinformation” and did not deserve the attention of other members.

“Russia is isolated and should be ashamed to sit in the UN chamber,” she said.

Speaking in Geneva, she said: “Putin is responsible for civilian casualties and over 500,000 people fleeing with the numbers still rising fast. The blood is on Putin’s hands, not just of innocent Ukrainians but the men he has sent to die.

Ukraine has accused Russia of war crimes during the invasion over the bombardment of civilian areas in the second city of Kharkiv.

In Warsaw, Mr Johnson pointed the finger at Mr Putin’s regime for what he earlier called the “barbaric and indiscriminate” violence against Ukrainian citizens.

Mr Johnson was asked how he felt as a father when he saw the images of dying Ukrainian children.

He said: “I think I felt what everybody in the world felt looking at that, that this is absolutely senseless.

“I think Vladimir Putin is a father himself, and no one can possibly understand how he has unleashed this conflict which seems to everybody to be so futile.

“Everybody can see that the Ukrainians are resisting.”

He said evidence of Mr Putin’s attacks on civilians could be used in a future trial at the International Criminal Court.

He added: “I must emphasize that we are not motivated by any hostility towards Russia or the Russians. Remove the reverse.

“All our hearts ache for the Russian soldiers sent to die in this futile venture, we all grieved with their parents.

“No wonder the Kremlin-controlled media refuses to tell the Russian people that their soldiers are attacking Kyiv. No wonder they spin a tissue of lies and claim that Russia is merely conducting a special operation in the Donbas.

“Russia is a great country and civilization and we will never forget her sacrifice in the struggle against fascism side-by-side with ourselves.

“We must emphasize every day that it is Putin’s regime which is exacting from its own people an unacceptable cost for an unnecessary war, a war of choice that should end as soon as possible.

“In the face of this gathering tragedy, I say to Vladimir Putin and his regime there is only one way out of this morass. And that is to stop the tanks, to turn back the tanks on their way to Kyiv, turn them round and take the path to peace.”

Officials admitted there looked like little prospect of a diplomatic solution.

Latest intelligence from the Ministry of Defense said the advance on Kyiv had made little progress over the past 24 hours, probably due to logistical problems.

But there had been increased use of artillery north of the capital.

Satellite images from the Maxar company showed the extent of the Russian forces massing around Kyiv, with a column of armored vehicles, tanks, artillery and support vehicles stretching 40 miles.

That force was 17 miles from the capital on Monday.

Mr Johnson is visiting Poland and Estonia to help show the UK’s support for its eastern Nato allies.

During the first leg of his visit, in Warsaw, he committed to doing more to allow Ukrainians to come to the UK, with around 200,000 eligible under an expanded route for people to bring family members in.

He said: “What we are going to do is we are extending the family scheme so that actually very considerable numbers would be eligible… you could be talking about a couple of hundred thousand, maybe more.

“Additionally, we are going to have a humanitarian scheme and then a scheme by which UK companies and citizens can sponsor individual Ukrainians to come to the UK.”