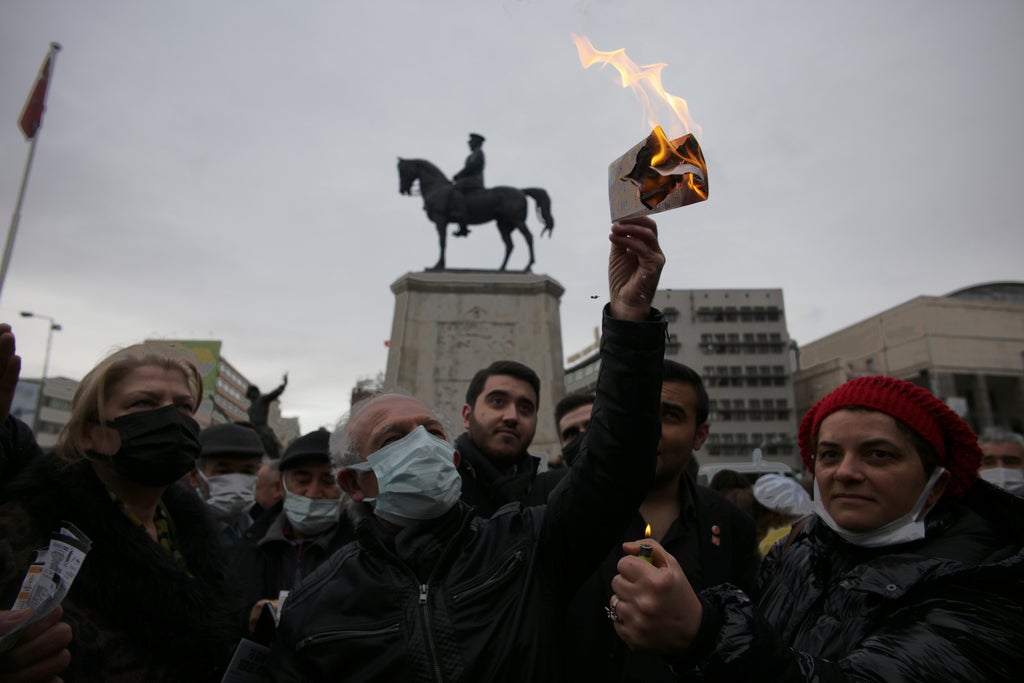 President Recep Tayyip Erdogan said the value-added tax would be lowered to 1% from 8% on food purchases. His decision will be published in the Official Gazette and go into effect on Monday.

Erdogan said, in addition to the tax discount, the government “expects” food companies to lower their prices by 7%. He said these foods play a significant part in inflation.

Official data for January showed inflation rose to a staggering 48.69% annually, although independent experts say the true number is much higher, more than 115%.

“We will not let inflation crush our nation,” Erdogan said.

Critics, however, say the country is suffering from high inflation because of Erdogan’s insistence on lowering interest rates. He believes inflation is caused by high interest rates, in opposition to established economic theory.

The central bank, whose independence has been eroded by the government, had brought down the key policy rate by 500 points since September to 14%, but paused rate cuts in January.

A currency crisis was triggered by the cuts and the Turkish lira hit record lows in December. Because Turkey relies on imports for its energy needs as well as raw materials and many food supplies, prices have skyrocketed.

The government insists that Turkey’s economic downturn has been caused by foreign interference and external factors. Erdogan declared Saturday that Turkey would combat the “threats to destroy our economy” with all available means.

The lira closed this week at 13.49 against the dollar. The record low in December was 18.36. The currency has been hovering around 13.5 since that record low after the government instituted a new financial tool to push savers away from buying foreign currencies and encourage them to convert their dollars to Turkish liras with a deposit scheme protected against currency fluctuations.

Households and businesses have been suffering from sharp hikes in energy prices. Authorities raised electricity tariffs on Jan. 1, spiking prices by more than 50% for many homes and as much as 127% for businesses and high-consumption households. Some protests have broken out and many small businesses like restaurants have been sharing their electricity bills on social media to show how close they are to being driven out of business.

Thousands of health-care workers went on a one-day strike Tuesday, demanding better working conditions and pay, as well as measures to protect them against increased verbal and physical assaults from patients or their relatives.

Turkey’s minister of treasury and finance, Nureddin Nebati, also announced a step to encourage people to bring gold that they have been saving. He said 1,500 gold drop-off locations would begin operation on March 1 to integrate the precious metal into the financial system as deposits. He added people would be able to withdraw their gold in physical form if they wished to.