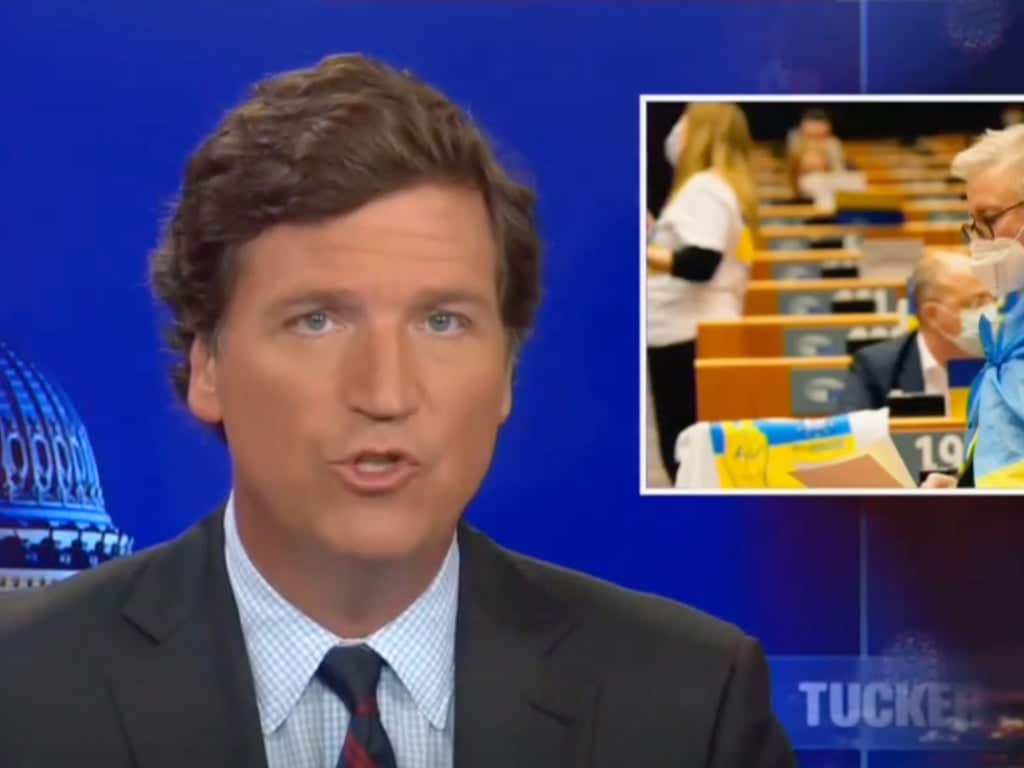 Mr Carlson compared it to the support for public health measures during the pandemic, such as mask mandates.

“Masks were a training exercise. Mandatory masking was a shock collar designed to teach Americans unquestioning obedience and, of course, it worked because shock collars do work,” Carlson said on Tuesday night. “In a single day last month we watched, for example, our entire professional class dutifully changed their Twitter avatars from ‘mask up’ to the now mandatory Ukrainian flag.”

The Fox News host claimed that “there was no debate about doing this, no reflection. There was not even a real conversation. They just did it. Millions of people simply reflexively assumed a partisan position in a highly complicated foreign crisis, the next crisis, and as they did it, they moved in perfect lockstep”.

“They were guided by their masters of the social media companies who were themselves taking direction from the White House,” he claimed.

“The whole thing was like watching synchronized swimming in” the North Korean capital of Pyongyang, Carlson said.

“It was an amazing performance. Most amazing of all was seeing Republican leaders join the herd after two years of Covid training, they couldn’t help themselves. The result was the largest political flashmob in American history — Republicans, Democrats, business titans and the media all on one side,” he added.

The Russian invasion of Ukraine has brought Republicans and Democrats together in a rare moment of bipartisan fury directed at Russian President Vladimir Putin, who pushed a false narrative to motivate his invasion, baselessly claiming that Russian speakers in Ukraine were victims of genocide and that Ukraine was being led by “drug addicts and neo-Nazis”.

“Once again I speak to the Ukrainian soldiers,” Mr Putin said on 25 February. “Do not allow neo-Nazis and Banderites [historical Ukrainian fascists] to use your children, your wives and the elderly as a human shield. Take power into your own hands. It seems that it will be easier for us to come to an agreement than with this gang of drug addicts and neo-Nazis.”

Carlson claimed that “dissent of any kind was banned instantly… and those who persisted in asking questions because they were lucky enough to have a rare, protected platform, found themselves threatened with something worse —maybe indictment, maybe arrest”.

The Fox News host has been accused of parroting Russian propaganda.

She said Mr Zelensky “needs to warn America about allowing Putin to use them for his propaganda. I particularly hope he mentions the false flag about biological weapons in Ukraine so that all the Republicans hear that Tucker Carlson and others are really, really close to treason in terms of what they are saying and parroting what is Putin’s dream – that he could have American media spreading his propaganda in the middle of his murderous assault on innocent children and civilians in Ukraine”.

“Oh, so defending our country from your recklessness and unwise decision-making is treason? Declare your loyalty to Ukraine or you’ve committed a crime, right?” Carlson asked on his Tuesday night broadcast.

“Claire McCaskill, whatever you think of her, was not talking like that two years ago. No one in public was talking that way two years ago, before Covid. In a free country, you’re allowed to say what you think is true. You can defend your country if you want, even if politicians disagree with you. That was the whole point of living in the United States, but not anymore.”