Productos Tubulares has submitted to the works council a termination ERE for 157 workers out of a workforce of around 420 employees, in addition to a 25% pay cut, an increase in working hours from 1,680 to 1,704 hours per year and the closure of the steel mill from the plant, as confirmed by committee sources.

Thus, Tubos Reunidos has presented this Wednesday to the Tubular Products an ERE for extinction for the plant located in the Biscayan municipality of Valle de Trápaga.

At this meeting, in which the company has delivered all the documentation to the committee, the negotiating committee has been set up and the consultation period has begun, which will last for one month.

On February 28, Tubos Reunidos, which closed 2017 with 32.4 million losses, 35% less than the previous year, announced that it would undertake a restructuring “immediate“in its Tubular Products plant, which has more than 430 workers.

That same day, the directors of Productos Tubulares informed the committee that, due to the accumulated losses, it had the intention of applying layoffs, salary reductions and termination of the agreement, according to what the workers’ representatives themselves announced. 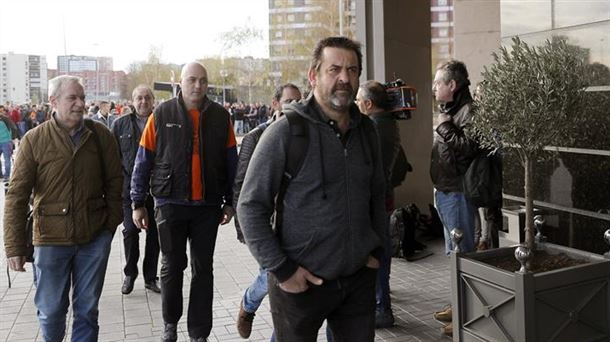 Members of the Tubular Products works council, before the meeting. Photo: EFE

The president of Tubos Reunidos himself, Guillermo Ulacia, recently stated that the situation of Tubular Products is “very bad” and that it was urgent to adopt measures because the forecast for 2018 does not point to an improvement.

The meeting was held at the Puerta de Bilbao hotel, in Barakaldo, while the workers concentrated abroad.

The Productos Tubulares works council has shown its rejection of the dismissals that the company has proposed to them, as its president has highlighted to Europa Press, Julen Beloki.

Beloki has indicated that these are “very drastic” measures and has shown its rejection of the dismissals that would entail a reduction in the workforce that, in its opinion, would make it “impossible” to undertake the production they reached in 2017.

The chairman of the committee has insisted that the company’s losses, of around 10 million in 2017, are due to “mismanagement.” Beloki has indicated that, from now on, they will study the documentation that has been delivered to them and, later, a plenary committee will be convened. The next meeting with the company, within the consultation period, is scheduled for Tuesday at 09:30.

Management expects to return to profit in 2019

Productos Tubulares expects to return to profit in 2019, with a positive result close to one million euros, thanks to the implementation of the plan announced this Wednesday.

This, as explained, leads them to implement a competitive adaptation plan (PAC) that allows the “maintenance of the activity”. The company has indicated that the objective of these measures is to reverse the situation of losses of Tubular Products, from the negative 14 million euros estimated for 2018, without the implementation of the plan, until achieving a positive result close to one million euros in 2019.

See also  Donda 2 live updates: When does Kanye West's album drop and how can I stream it?