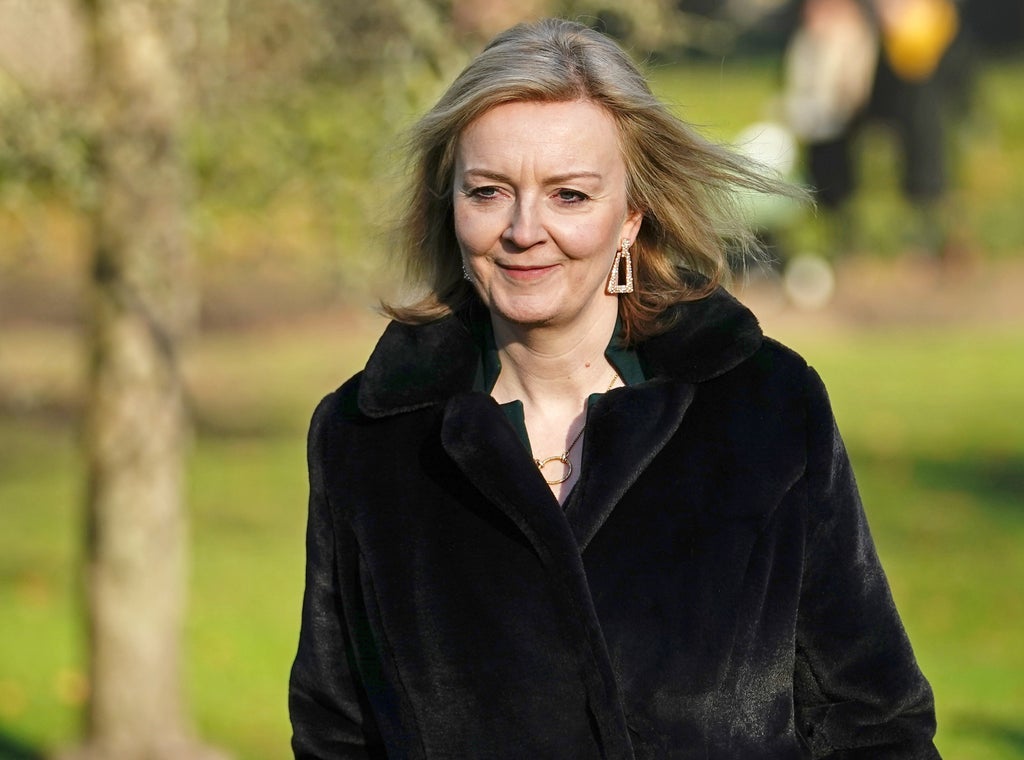 There is “still time for diplomacy” to resolve the Ukraine crisis, Foreign Secretary Liz Truss said as she arrived in the capital Kyiv.

Her visit to Ukraine came as tensions continued to mount between Russian-backed separatists and state forces in eastern Ukraine, with claims that rebel shells hit a nursery school.

Ms Truss said she was “very concerned” about the situation and accused the Kremlin of trying to create a pretext for an invasion.

Separatist authorities in the Luhansk region claimed there had been an increase in Ukrainian shelling along the tense line of contact, describing it as a “large-scale provocation” and they then returned fire.

The Kyiv government disputed the claim, saying that separatists had shelled its forces but they did not fire back

A nursery building in Stanytsia Luhanska was hit, wounding two civilians, according to the Ukrainian military.

Ms Truss – who has warned that Russian President Vladimir Putin could mount a “false flag” operation to justify an invasion – said: “Reports of alleged abnormal military activity by Ukraine in Donbas are a blatant attempt by the Russian government to fabricate pretexts for invasion .

“This is straight out of the Kremlin playbook.”

The UK and US have accused Russia of deploying 7,000 more troops near Ukraine’s borders, despite claims by Moscow that units have started returning to base after military exercises.

Russia has repeatedly denied having any intention of attacking Ukraine, despite massing an estimated 130,000 troops along the border.

Ms Truss said she was “very concerned about reports today of increased Russian aggression: over 7,000 extra troops near the Ukraine border and an attack by pro-Russian troops on a kindergarten in Ukraine”.

She urged Russia to withdraw its troops as there was “still time for diplomacy and de-escalation”.

Speaking at a press conference at alliance headquarters in Brussels, he said there were “many” Russian intelligence officers active in Donbas, east Ukraine.

“Of course this is a concern,” he said. “This is the reason why we are so closely monitoring what is going on.”

The UK minister and his Nato counterparts were joined by representatives from Ukraine and Georgia at their meeting in Brussels.

Mr Wallace said Mr Putin risked making a “strategic error” if he invaded Ukraine, because it would result in a stronger Nato presence in eastern Europe.

Russia released footage in recent days claiming to show troops and equipment moving back to base following military exercises in regions close to the Ukraine border.

But Mr Wallace said nearly 60% of Russia’s land combat forces were still in place around the borders of Ukraine.

Although an invasion is unlikely to result in British troops fighting, as Ukraine is not a Nato member, the military build-up has caused anxiety among eastern members of the alliance.

UK forces have been committed to efforts to bolster defenses on Nato’s eastern flank.

Britain has already said it is doubling its number of troops in Estonia, with around 850 members of the Royal Welsh battlegroup heading from Sennelager in Germany and bases in Europe for the Baltic state, while 350 Royal Marines are being despatched to Poland.

Four additional RAF Typhoon jets have landed in Cyprus to join Nato patrols over eastern Europe, while offshore patrol vessel HMS Trent will shortly be joined in the eastern Mediterranean by HMS Diamond, a Type 45 destroyer.

The Defense Secretary said it is important that Mr Putin understands that Nato is united and “deadly serious in how we are going to face the threat that is currently being posed to both Ukraine and potentially to our security”.

Mr Stoltenberg said Nato is “considering” its next steps in the light of the changing security situation.

The secretary general told reporters at a press conference in Brussels that possible responses included boosting troop levels in Romania and elsewhere in the south east of the alliance’s territory.

Mr Stoltenberg said Nato would join an exercise in Georgia later this year as part of its support for “partners” in the region.