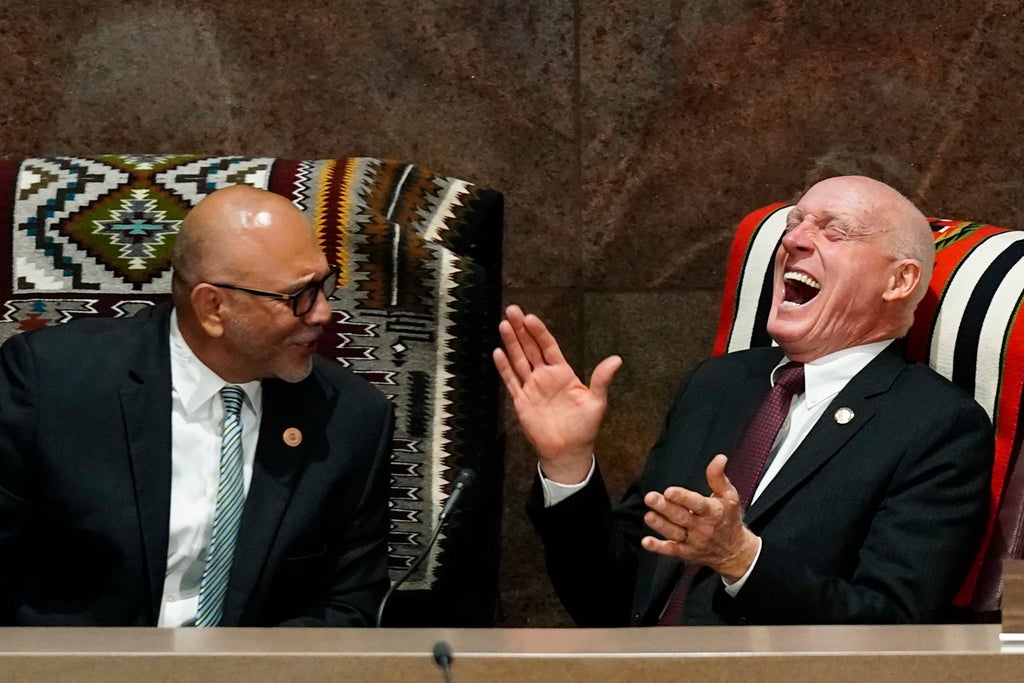 The top Republican in Arizona’s House of Representatives has effectively killed a sweeping election bill that proposed giving the GOP-dominated legislature unprecedented control over the state’s election results – including whether to “accept or reject” them outright.

Republican House Speaker Rusty Bowers assigned the bill to all 12 legislative committees this week, essentially torpedoing its chances of ever receiving a vote on the House floor.

The legislator who sponsored the latest bill, John Fillmore, called the move a “12-committee lynching,” according to Arizona’s KPHO/KTVK.

Mr Bowers – who supported Mr Trump in 2020 – called the bill’s proponents a “screaming, demanding, arrogant, self-righteous bunch,” according to the Arizona Daily Star.

“For somebody to say we have plenary authority to overthrow a vote of the people for something we think may have happened, where is [the evidence]?” he said. “The point is, when we gave a fundamental right to the people, I don’t care if I win or lose, that right was theirs.”

The state has emerged as a hotbed of election-related conspiracy theories, fueling dozens of bills – some of which were sponsored by GOP lawmakers who supported a spurious “audit” of the state’s 2020 presidential election results – to overhaul voting rules in the wake of the 2020 presidential election and Donald Trump’s baseless narrative that it was “stolen” from him.

Within the first few weeks of 2022, Republican legislators proposed holding a special legislative session to review election outcomes, and blocking municipalities from holding all-mail elections, which the vast majority of the state’s voters have used for more than a decade.

The bill from Mr Fillmore, who is among dozens of state-level Republican officials across the US who deny the outcome of the 2020 presidential election, would allow the legislature to “accept or reject” the results of primary and general elections. It also would significantly roll back ballot access by eliminating early and mail-in voting.

“We should have voting – in my opinion – in person, one day, on paper, with no electronic means and hand counting that day. We need to get back to 1958-style voting,” he said at a recent hearing.

In the aftermath of the 2020 election, Mr Bowers said that while he voted for Trump and worked to reelect him, he “cannot and will not entertain a suggestion that we violate current law to change the outcome of a certified election.”

The latest move in Arizona points to a larger fissure on the American right, fractured over its devotion to the former president and bogus election fraud conspiracies fueling political violence.

On Friday, the Republican National Committee censured Republican US Reps Liz Cheney and Adam Kinzinger for serving on a House committee investigating the attack on the US Capitol, which GOP leaders determined is “legitimate political discourse.”

Meanwhile, Mike Pence roundly rejected Mr Trump’s claim that his vice president could have “overturned the Election” when he presided over the electoral college certification on 6 January, 2021.

“President Trump is wrong,” Mr Pence said on Friday. “I had no right to overturn the election… The presidency belongs to the American people, and the American people alone. Frankly, there is almost no idea more un-American than the notion that any one person could choose the American president.”

See also  "That landfill took your life and mine"

Across the US, dozens of campaigns for public office and legislation filed by GOP legislators seek to do for future elections at the state level what Mr Trump and his allies failed to do in court.

At least 51 people who denied the outcome of the 2020 presidential election are running for governor in 24 states, and at least 21 others are running for secretary of state in 18 states, according to the United States Democracy Center.

In 2021, Republican legislators in 17 states passed at least 32 new laws to change the rules of election administration and strip oversight from election officials to put it into the hands of GOP-controlled legislatures.

A parallel effort saw at least 19 states passed 34 laws restricting ballot access, the result of more than 440 bills with provisions to undermine the right to vote proposed in nearly every state.