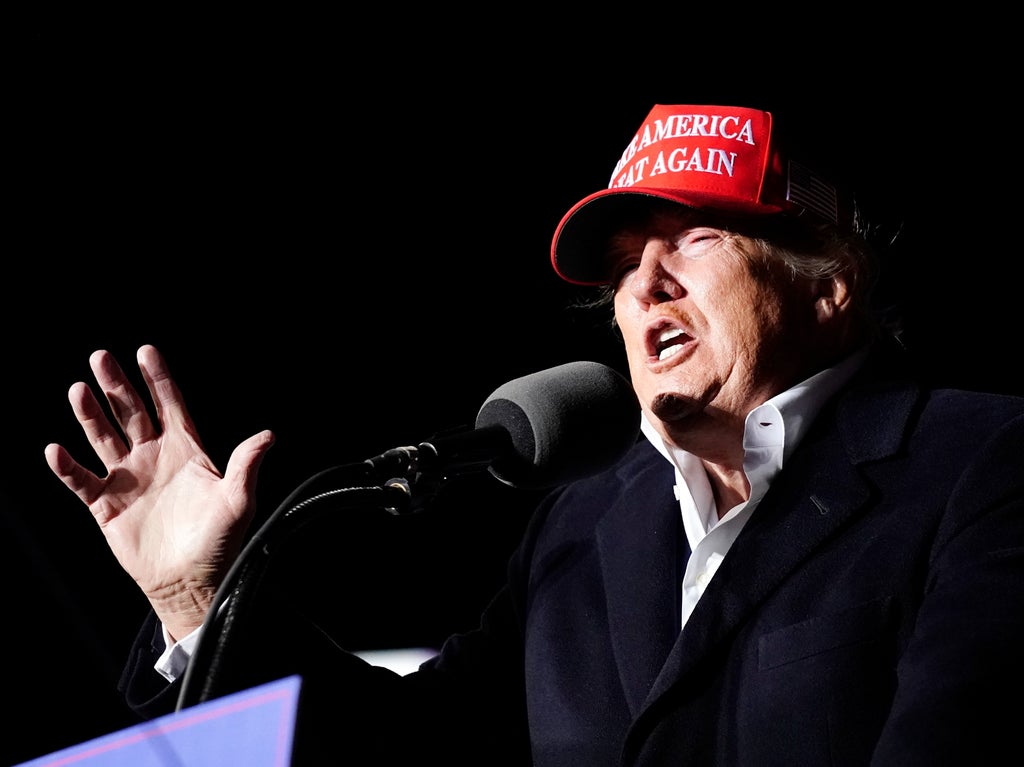 As a US congressional committee prepares to investigate Donald Trump’s handling of administration documents after 15 boxes of records were transferred from his Florida resort, the former president is insisting he was “under no obligation” to hand over any materials – despite laws requiring him to do exactly that.

US Rep Carolyn Maloney, chair for the House of Representatives Oversight Committee, said that she was “deeply concerned” as the documents “appear to have been removed from the White House in violation of the Presidential Records Act.”

The news of the document haul, which appears to have contained sensitive or even top secret papers, has sent many experts pondering the chances that Mr Trump could face legal sanction for mishandling documents.

On Friday, the former president lashed out at the House select committee investigating the attack on the US Capitol as “out of control” while reviving baseless voter fraud narratives and attacking journalist Maggie Haberman over reporting from a forthcoming book about his term in office. Then, on Saturday morning, I described his presidency to Fox News as a “romantic period.”

“Our country was thriving. We were just beating everybody,” the former president said.

Mr Trump’s former communications director Alyssa Farah, meanwhile, has said her onetime boss is “terrified” about the book’s revelations into his character and behaviour, including that the former president flushed documents down toilets and remains in touch with North Korea’s Kim Jong-un.

White House call logs obtained by the House January 6 committee do not list calls made by Donald Trump as he watched the violence unfold on television, nor do they list calls made directly to the president, two people familiar with the probe have told the Associated Press .

The gaps in the records of Trump’s calls on 6 January come as a separate House committee said Thursday that it is investigating whether former Trump violated the Presidential Records Act, after boxes of presidential records were retrieved from his Mar-a-Lago resort.

Even as the headlines grow worse about his handling of White House documents, Donald Trump recalled his presidency as a “romantic period.”

“Our country was thriving. We were just beating everybody,” the former president told Fox & Friends on Saturday. “And they view it as a romantic period I think, and I think that’s really why it’s doing so well, because there is a lot of romance to the book.”

Trump says ‘operatives’ spied on him, should be punished by ‘death’

Former president Donald Trump released a bizarre statement on Saturday night, claiming he was spied on by “operatives” of Hillary Clinton’s presidential campaign and that those involved should be put to death.

According to Mr Trump, special counsel Robert Durham – who the Trump administration hired to investigate the Russia investigation – has uncovered “indisputable evidence that my campaign and presidency were spied on by operatives paid by the Hillary Clinton Campaign in an effort to develop a completely fabricated connection to Russia.”

“In a stronger period of time in our country,” Mr Trump added, “this crime would have been punishable by death.”

The Mar-a-Lago papers: What happens next?

Revelations that Donald Trump took government records with him to Mar-a-Lago are a political headache for the former president — and a potential legal one.

Here’s a look at what could lie ahead:

Washington Post reported on Thursday that some of the White House documents that Mr Trump took to Mar-a-Lago were plainly marked as classified and that the improperly moved documents included some at the top-secret level.

“I wasn’t surprised when I saw the report,” Ms Grisham told CNN on Friday. “I think that what’s important is this is another example of a White House and an administration that just – we had no rules. We followed no rules.”

Washington Post columnist Greg Sargent has argued that former Trump White House Chief of Staff Mark Meadows’ recent backing of Donald Trump’s handling of government documents was “so ludicrous that he deserved to be laughed off the set” of Newsmax, but that his “nonsense was permitted to slide by”.

Mr Meadows mocked the media for suggesting that documents torn up by Mr Trump and taped together by aides “show some nefarious purpose”.

“Yet they will ignore Nancy Pelosi ripping up something on national TV behind the president,” Mr Meadows said, apparently referring to the speaker ripping up a copy of Mr Trump’s 2020 State of the Union speech.

Former first lady Melania Trump will use Parler, a popular platform with the right wing in the US, exclusively for her social media communications.

In a statement on Wednesday, the company announced that it had entered into a “special arrangement” for Ms Trump’s social media communications.

“I am excited and inspired by free speech platforms that give direct communication to people worldwide,” Ms Trump was quoted as saying by the company’s press statement.

Speaking on ABC’s The ViewMs Griffin told her co-hosts that two members of her family had boycotted her November wedding to Justin Griffin over “political differences after I spoke out against President Trump.”

Speaking on Fox and Friends Weekend on Saturday, Mr Trump asserted that no one had been tougher on Russia than him – but said he and Mr Putin had “got on very well.”

Donald Trump called out MSNBC in a short statement, shaming the liberal network for its recent downturn in ratings as its most popular host, Rachel Maddow, takes a break from her show.