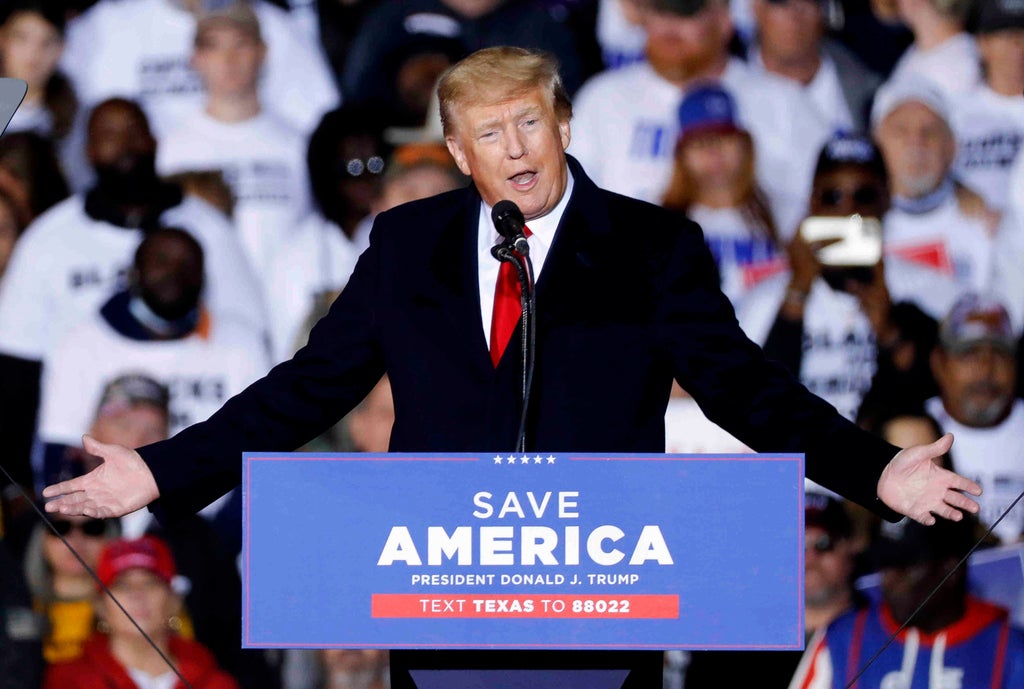 Donald Trump called for the “biggest protests ever” in Washington, DC and across the country if the prosecutors investigating him and his businesses are found to be doing “anything illegal.”

The former president was speaking at a rally in Conroe, Texas on Saturday, and seemed to connect the investigations to his baseless conspiracy theory that the 2020 election was stolen from him through fraud.

“If these radical, vicious, racist prosecutors do anything wrong or illegal, I hope we are going to have in this country the biggest protest we have ever had in Washington DC, in New York, in Atlanta and elsewhere because our country and our elections are corrupt,” Mr Trump said.

Mr Trump is facing a number of investigations in New York, Georgia, and Washington, DC where the House Select Committee investigating 6 January is looking into his actions in relation to the Capitol riot last year.

“In reality, they’re not after me, they’re after you, and I just happen to be the person in the way,” Mr Trump told his supporters.

The New York Attorney General Letitia James and the Manhattan district attorney’s office are investigating the Trump Organization, including members of the former first family.

Ms James has said that her office has found “significant evidence” that the Trump Organization used false and misleading asset valuations for several of their properties.

“For years, they’ve been going after my company, many years, using every trick in the book in an attempt to literally, if they can, put me in jail. They want to put me in jail,” Mr Trump told rallygoers.

Mr Trump called the prosecutors “racist” on several occasions, adding that they’re “mentally sick” and that they were guilty of “prosecutorial misconduct at the highest level”.

The former president called those investigating him “vicious, horrible people.”

“They’re going after me without any protection of my rights by the Supreme Court or most other courts,” Mr Trump claimed.

The former president has tried several times to get the Supreme Court to stop investigators from getting a hold of records and documents connected to their probes.

White House Press Secretary Jen Psaki said on Monday that Mr Trump had “defended the actions of his supporters who stormed the Capitol and brutally attacked the law enforcement officers protecting it.”

She added that Mr Trump “even attacked his own vice president for not, in his words, having overturned the election, and it’s just a reminder of how unfit he is for office”.

Mr Trump’s actions “represent a unique and existential threat to our democracy,” she said, adding that “it’s telling that even some of his closest allies have rejected those remarks as inappropriate in the days since”.

“If the Vice President (Mike Pence) had ‘absolutely no right’ to change the Presidential Election results in the Senate, despite fraud and many other irregularities, how come the Democrats and RINO Republicans, like Wacky Susan Collins, are desperately trying to pass legislation that will not allow the Vice President to change the results of the election?” Mr Trump said in a statement on Sunday.

“Actually, what they are saying, is that Mike Pence did have the right to change the outcome, and they now want to take that right away,” he said. “Unfortunately, he didn’t exercise that power, he could have overturned the Election!”

“If I run and if I win,” Mr Trump said, referring to a possible 2024 presidential campaign, “we will treat those people from January 6 fairly. We will treat them fairly. And if it requires pardons, we will give them pardons because they are being treated so unfairly”.

More than 700 have been charged with a crime in the sprawling Capitol riot investigation following Trump supporters’ attempt to prevent Congress from certifying his 2020 electoral loss to President Joe Biden. The rioters were urged on by the lie spread by the now-former president that the election had been stolen through fraud.

Seven people died in relation to the violent siege and more than 100 police officers were injured.

Members of the far-right militia the Oath Keepers were present at the attack – 11 people involved in the group have been charged with seditious conspiracy. Mr Trump himself was impeached for a second time as a result of the riot. He was once again acquired during the Senate trial.

Ten Republicans in the House voted to impeach and seven GOP senators voted to convict. Since the threshold for conviction in the Senate wasn’t reached, Mr Trump is free to stand again following his 2020 loss.

Mr Dean served as the White House Counsel in Mr Nixon’s administration from 1970 until 1973, but he was detained and disbarred following the Watergate scandal, during which Mr Dean gave vital testimony before Congress. The affair led to Mr Nixon leaving office in 1974.

“This is beyond being a demagogue to the stuff of dictators,” Mr Dean, 83, tweeted about Mr Trump’s suggestion of pardoning rioters. “He is defining the rule of law. Failure to confront a tyrant only encourages bad behaviour. If thinking Americans don’t understand what Trump is doing and what the criminal justice system must do we are all in big trouble!”

“I don’t want to send any signals that it was okay to defile the Capitol,” South Carolina Republican Senator Lindsey Graham, a close Trump ally, told face the nation on CBS on Sunday. “I want to determine what people did on January 6, and those who did it, I hope they go to jail and get the book thrown at them because they deserve it.”