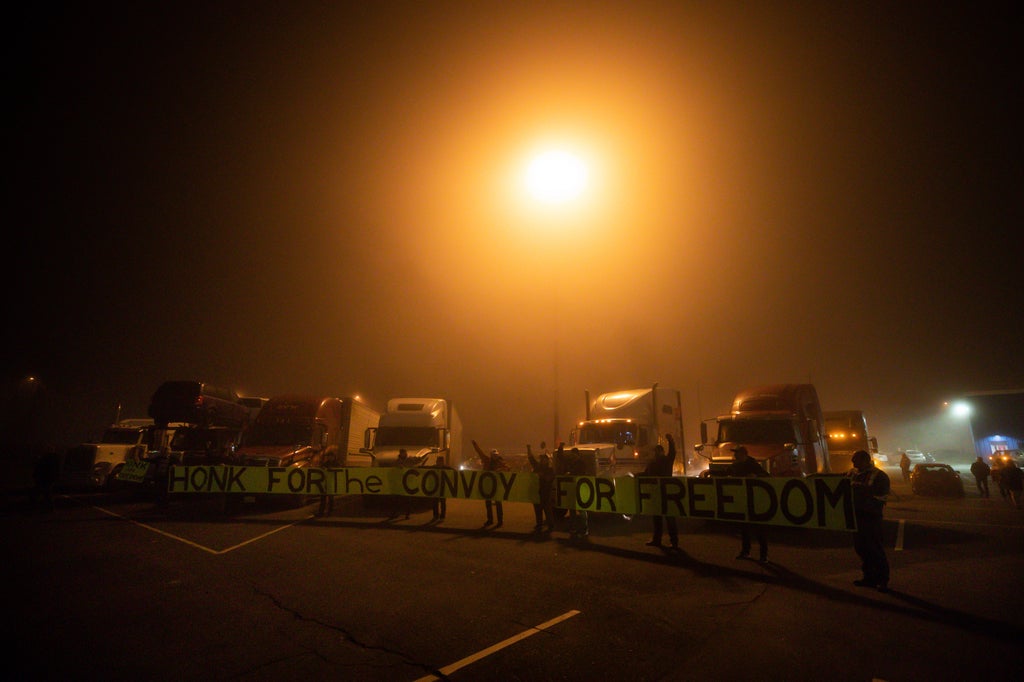 Canadian Prime Minister Justin Trudeau has blasted the “fringe minority” behind the convoy of truckers protesting Covid passports at the US border.

The convoy is making its way to Ottawa’s Parliament Hill to protest the country’s Covid-19 vaccine mandates this weekend.

But the country’s leader is less impressed than the electric car entrepreneur, who has a Canadian mother.

“The small fringe minority of people who are on their way to Ottawa who are holding unacceptable views that they are expressing do not represent the views of Canadians who have been there for each other, who know that following the science and stepping up to protect each other is the best way to continue to ensure our freedoms, our rights, our values, as a country,” said Mr Trudeau.

Ottawa police say they are on high alert, tweeting on Thursday, “we are aware of inappropriate and threatening language on social media related to this event”.

The federal government ended a truckers’ exemption to the vaccine mandate on 15 January, which now means that Canadian truck drivers need to be fully vaccinated to avoid a 14-day quarantine when they cross back into the country from the US.

The convoy has made its way from British Columbia for this weekend’s rally, which police say is expected to draw around 2,000 demonstrators.

Mr Trudeau has said that it is the Canadians who have got vaccinated who have been protecting “the freedoms and the rights of Canadians to get back to the things we love to do”.

Supporters of the convoy have said they will be calling on Mr Trudeau to end all mandates, even though most are the responsibilities of the country’s provinces.

Despite the convoy, the federal government has said that it has no plans to end the federal vaccine mandates that apply to truckers and other Canadian travellers.

“We’ve been unequivocal and we were very clear in the last election, that vaccination is the way through this, whether it’s for travellers, whether it’s for federal public servants, or areas of federal jurisdiction,” said Mr Trudeau.

And he rejected claims that there is a link between the mandate and shortages seen on some grocery store shelves, saying that the global supply chain has been negatively impacted by Covid-19.

Transport Minister Omar Alghabra has said that since the mandate came into effect earlier this month there has been no large-scale reduction in the number of trucks crossing the border.

Figures show that 104,000 trucks crossed the border into Canada in the last week, down just four per cent from the same period in 2019, says CTV News.

The Canadian Trucking Alliance has estimated that about 15 per cent of truckers, as many as 16,000 truckers, are not fully vaccinated against COVID-19.