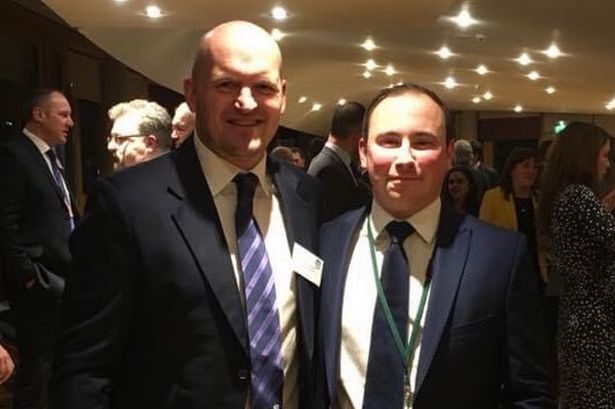 A 30-year-old former pupil of St Joseph’s College in Dumfries died while playing rugby in Ireland on Saturday.

David Hill was taking part in a friendly match for the Scottish Parliament team against the Dail and Seanad XV in Dublin when the tragedy happened.

Tributes have poured in for the popular Conservative Party researcher.

His devastated dad, Rodger Hill from Dumfries, said his family is “broken” and the pain of losing David is “unbearable”.

Mr Hill said on Twitter: “I can’t believe I’m writing this. My amazing son David passed away today playing rugby in Dublin for the Scottish Parliament.

“He was the best and the pain is unbearable. We are broken.”

David’s mum Sharon Duncan posted on Facebook: “It is with a deeply heavy heart that we share with you all that our beloved son, brother and uncle, David Hill died yesterday in Dublin at 2.30pm following a tragic rugby accident.

“David was and is to us an amazing, wonderful man who lit up our lives with love, humor and joy. Our hearts are truly broken and all his family and friends of him are devastated.

“We will bring him home as soon as we can so that we all can say a proper goodbye.”

David, who was “rugby daft”, worked as the head of office for Scottish Tory MSP and Holyrood justice spokesman Jamie Greene.

Mr Greene described him as a “friend, colleague and confidant for so many in the Scottish Parliament over the years”.

He said David “loved his politics, but he loved his rugby more”.

He added: “The whole parliament, my party and the whole rugby community is deeply saddened by this awful news today, and our condolences lie entirely with his family, friends and colleagues.”

Scottish First Minister Nicola Sturgeon tweeted: “This is so terribly sad. My deepest condolences to David’s family, friends and colleagues.”

“He was a kind, generous, well-liked and highly respected part of our team.

“We will all miss him dearly. All our thoughts are with his family and friends of him. ”

Finlay Carson MSP for Galloway and West Dumfries said on Sunday: “This morning there will be many still coming to terms with the tragic loss of one of the true good guys.

“David Hill will be greatly missed by all who loved him as a team mate, colleague and friend.”

A former player for Dumfries Saints, David was a regular at Scotland internationals.

A spokesman for the club described David’s death as “terribly sad”, adding: “He loved the game and gave 100 per cent effort every time he stepped on the pitch.

“The club sends its condolences to David’s friends and family. RIP Hilly.”

St Joseph’s College head teacher Bernie Jones said: “The deepest condolences of the St Joseph’s College community are extended to the family, friends and colleagues of past pupil David Hill who tragically died yesterday playing rugby, the sport he loved.

“David was an architect of the revitalized Holyrood RFC and will be remembered at the Scottish Parliament as a kind, generous, well-liked and highly respected colleague, as he was when at school wearing ‘the blue and gold’.

“David’s talents were many including being an excellent piper, playing at various school events, including paying tribute to the failed of the 51st Highland Division at Newfoundland Park and the Menin Gate during a Battlefields trip.

“May you rest in peace, David.”

Dad Rodger said a celebration of David’s life will take place in Dumfries at a later date.

He added: “All his family, friends and colleagues will be most welcome. David brought joy to so many and the pain is truly awful.”