Skip to content
Home News Trial of Torra for maintaining the yellow ribbon in the Generalitat: November 18


The President of the Generalitat, Quim Roast, has alleged this Monday that the orders of the Central Electoral Board (JEC) to remove the yellow ties from public buildings were “illegal”, since this is not a “hierarchical superior” body to the head of the Catalan executive.

Torra has questioned in response to his defense the instructions that the Electoral Board gave him to remove the symbols of support for the imprisoned politicians. “Yes, I disobeyed her. It was impossible to comply with an illegal order.”, has explained.

At the beginning of his statement, the President of the Generalitat announced that he was not going to answer the questions of the popular accusation, exercised by Vox, since it is a “Francoist party”. “This country has suffered forty years of dictatorship fascist, and I will not answer. ” It has also refused to respond to those exercised by the Prosecutor’s Office.

Torra has said that, in addition, the Generalitat did not have any participation in the general elections of April 28, 2019, and that, as president of the Generalitat, he was in any case subject to the decisions of the provincial electoral boards.

The Catalan president has spoiled the JEC, which issued two orders on March 11 and 18 demanding the removal of ties and ‘stelades’ from public buildings to guarantee neutrality: “The JEC ordered me, threatened me, acted in an omnipotent and omnipresent manner.”

For Torra, who has testified in court for just over half an hour, the case against him is a case “of violation of the right to freedom of expression and clear censorship.”

Torra has defended that the yellow ribbon is not a partisan symbol, and that the ‘estelada’ represents a “longing for freedom” and is fully legal and in force.

After Torra, a dozen police officers and the former chief of Mossos Miquel Esquius have declared. In the afternoon session, the Cs spokesperson in Parliament, Carlos Carrizosa, will appear at 4:00 pm; the delegate of the Government in Catalonia, Teresa Cunillera; the Government exporter and JxCat councilor in the Barcelona City Council, Elsa Artadi; the Catalan Ombudsman, Rafael Ribó, and the Minister of the Interior, Miquel Buch.

The defense has requested the annulment of the trial

The trial began at 09:00, with the preliminary questions. Precisely, the lawyer for the president of Torra has asked annul the judgment against him when he considers that he is being violated the right to an impartial judge —Since he considers that he will not have a fair trial— and also alleging violation of the presumption of innocence: “They have a historic opportunity to save the democratic system.”

The lawyer Isabel Elbal, in the turn of previous questions in the hearing in the Superior Court of Justice of Catalonia (TSJC), has assured that the two members of the Central Electoral Board (JEC) who denounced Torra have already manifested in a hostile way against the sovereign process, and that the investigating magistrate of the case made a “partial instruction.”

He has regretted that the investigator of the case assessed the facts in a car that should have been objective and has assured that the room “is contaminated” because the president of the court, Jesús María Barrientos, and the magistrate Mercedes Armas were the ones who admitted the prosecution’s complaint for processing.

The TSJC has rejected this request as well as all the previous questions raised by his defense, arguing that they had already been raised previously and that the court had already given them an answer. 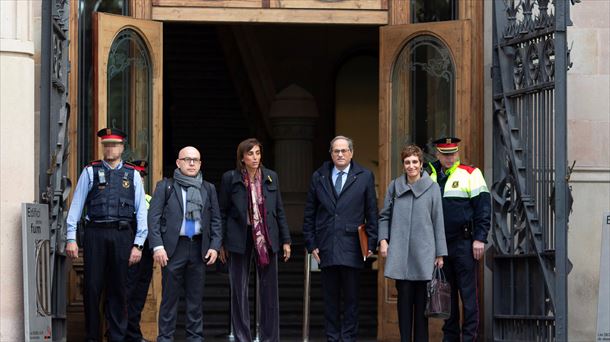 Torra, accompanied by his wife and his lawyers, at the gates of the Court. Photo: EFE

The president arrived around 08:30 a.m., and was received by the former president of the Generalitat, Artur Mas; the President of Parliament, Roger Torrent; almost all of his Govern, JxCat members, from ERC and the CUP, as well as leaders of Òmnium and the ANC. Supporters have chanted “It is not justice, it is revenge” and “Freedom of political prisoners.”

“I will accuse the State of violating my rights”

Torra announced yesterday in Bescanó (Girona) that today will accuse the State of “violating my rights and those of all Catalans”. “I am not going to defend myself against anything because I fulfilled my duty as president, to defend rights and freedoms,” Torra said in a brief speech before a hundred diners at a “dinar groc” (yellow lunch).

He welcomed the response of the Catalans after the sentence of the process, when he pointed out that he celebrates that “the people have reacted to an unjust sentence” and confessed: “I would have been disappointed if my country had not taken to the streets.”

Torra took his appearance in court with irony and commented that “depending on the food I eat today (sausage with beans) I will give one answer or another.” 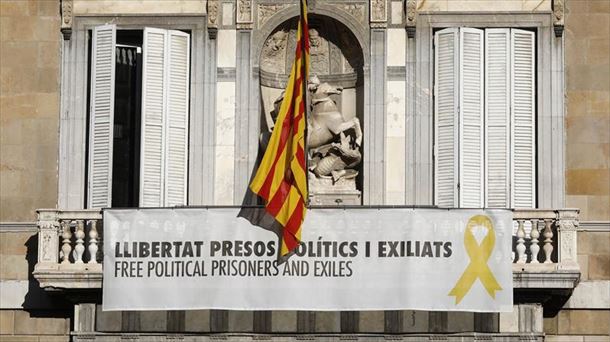 The Prosecutor’s Office maintains its request

The superior prosecutor of Catalonia, Francisco Bañeres, has concluded that the president of the Generalitat committed a crime of disobedience of the mandate of the Central Electoral Board (JEC) to remove the ties and ‘stelades’ from the buildings of the Generalitat, and has valued that, as the days passed after the first order, of March 11, his lack of institutional respect intensified and finally “came upside down” by changing the Palau banner for an identical one.

See also  "Many times the quality of the conversation surpasses that of a series": this is how the consumption of culture has changed | Hour 25 | Present

“The accused was intensifying this lack of institutional respect, to the point that it came up“and on the morning of March 21, he replaced the yellow ribbon banner with an identical one with the white ribbon, and in that spiral ended up filing a complaint against the entire JEC, Bañeres explained in his final report.

In his speech, Bañeres has ugly Torra “his null disposition to comply with the order“of the JEC, which, according to the Public Ministry, was a competent and superior body to give orders.

For the Public Ministry, which asks Torra to be sentenced to 20 months of disqualificationTorra “did not hesitate to take advantage of all his public appearances to invoke himself as a champion of freedom of expression, and to show his disagreement with all kinds of fuss” to the JEC.

He has argued that the electoral administration (the JEC) is a authority superior to the president of the Generalitat, that of the Government and all the public powers “concerned” in an electoral process.

The JEC ordered Torra to remove the symbols on March 11 on understanding that “they are considered partisan, so they cannot be exhibited by the Administrations and by the public powers during electoral periods, without seriously infringing their duty of objectivity and neutrality”, but Torra presented a reconsideration, which was denied on March 18, 2019, whereby the JEC personally ordered Torra to remove the symbols in 24 hours.

Torra submitted a letter on March 19 requesting its suspension and a clarification.

On March 21, Torra allegedly ordered that the banner with the yellow bow “It was completely covered” by another of the same size and format with the slogan “Freedom, political prisoners and exiles”, but in which the yellow ribbon had been replaced by a ribbon of the same white color, crossed by a thick line of red. 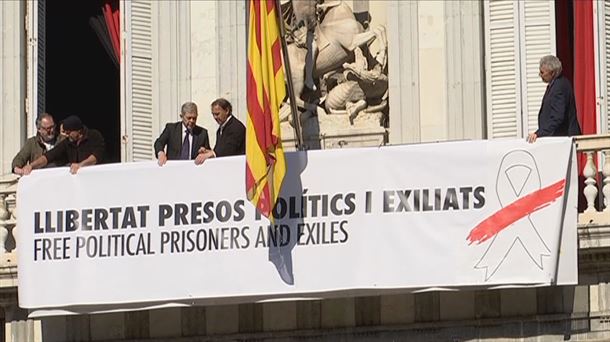 Banner that replaced the previous one

The investigating judge of the case reports in his brief that Torra did not remove the symbols despite the fact that the JEC ordered him to do so on March 11 and 18, and that it was not until the 22nd that They were removed after to be ordered to the Mossos d’Esquadra to proceed to do so. 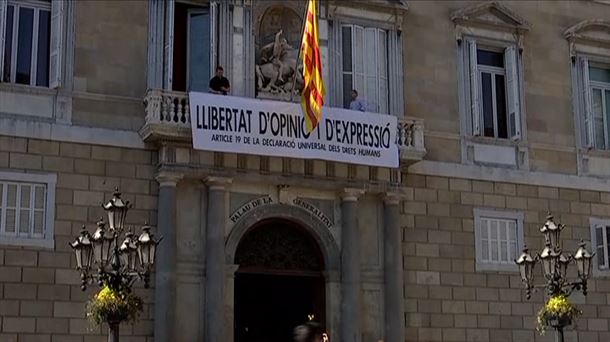 Last banner displayed in the Generalitat

The prosecution Superior of Catalonia asks to condemn President Torrá to a disqualification of one year and eight months for disobedience to the Central Electoral Board (JEC) and fining him 30,000 euros.

The popular accusation exercised by Vox requests a fine of 72,000 euros and disqualification from employment or public office for a period of two years.

On the eve of this judicial appointment, the president of the Generalitat has also said that he does not believe that they will disqualify him and has defended to return to dialogue with the Government of Madrid without conditions and “from you to you, talking about everything”, for which he has opted to “recover that figure of the mediator, the rapporteur, let’s call him whatever we want.”

In a interview published today by the newspaper NowQuim Torra has reported that he called the acting Prime Minister, Pedro Sánchez, last Monday, after the elections, and that he did not pick up the phone: “Five days have passed, he has not called me.”

“There are no conditions” said Torrá, “that the Government of Catalonia feels with the Government of Spain, face to face, talking about everything.” “And this,” he added, “we do, this time, with conditions of formality, so we have to recover that figure of the mediator, the rapporteur, call him whatever we want, who has to help dress a serious and serious negotiation process. credible”.

The President of the Generalitat is confident that “friends such as Jaume Asens or Gerardo Pisarello (from Catalunya en Comú), who have always gone to demonstrations in favor of political prisoners and have always been on the side of Catalonia’s right to self-determination. They will not renounce their principles and that, therefore, certainly there may be a “political change in the Catalan question here.”

Asked if Sánchez’s inauguration depended on the votes of his party and if he would be willing to vote no and go to a third election, Torra replied that “it is evident that it is. We already voted no to Mr. Sánchez and we will never vote in exchange for anything. Absolutely. We will not issue any more blank checks. “

Regarding the protests that have taken place in Catalonia after hearing the ‘procés’ sentence, Torra celebrates “that citizens have been empowered and have taken to the streets en masse and peacefully“.